Sergey Ponomarev took his now famous picture of a boat of Syrian refugees mooring to a Greek island shore on Nov. 16, 2015. Many boats werelanding there at the time — on some days, up to 50 would arrive from Turkey. The majority were inflatable rubber dinghies, but some of the boats were wooden, and you could always tell that the refugees preferred to have a wooden boat.

Ponomarev was there to photograph the landings for The New York Times.

"Every day, long before sunrise, we would go to the beach. There was a hill there; I climbed it with my binoculars and watched the horizon, waiting for the first boats to arrive," Ponomarev recalls. "We would often spend the whole day on the beach, going from boat to boat. The boat from the picture was one of them."

From the beaches in Greece, Ponomarev followed the refugees to Macedonia, Serbia, Hungary, Slovenia, all the way to European countries where they would seek asylum. Off and on, he would spend five months working on this project.

Exactly five months after Ponomarev took his iconic picture, he won the most coveted journalistic award in the world — the Pulitzer Prize. "It's really something. I suppose it means that this last year I did good," he told The Moscow Times. 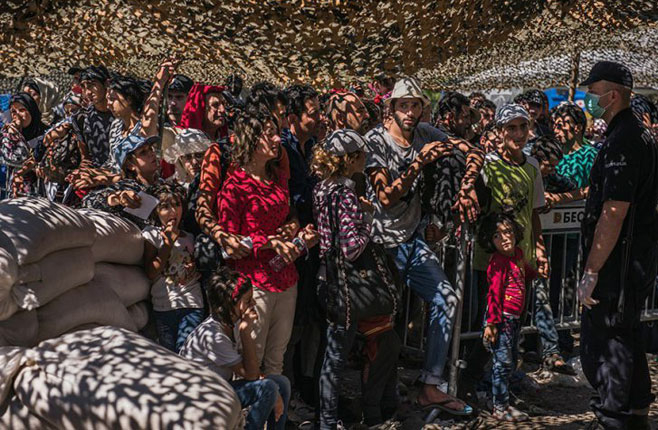 Refugees wait in line for documents in Presevo, Serbia in August 2015. "I followed them all the way to Europe," Sergey Ponomarev said.

Ponomarev says he is motivated above all by a desire to bridge the gap that people introduce between themselves and human tragedies elsewhere in the world.

"I want to show that the world is much bigger than an apartment or an office," he says, "and that at any given minute there are people living lives far worse than our own."

The Road to Pulitzer

Ponomarev, 35, is the third Russian photographer to have won the Pulitzer Prize. The significance of the award is not, apparently, lost on him. Throughoutour interview, the photographer is interrupted by dozens of messages and emails congratulating him on the victory. "Wow," he says at one point, "I just received a message from James Nachtwey. The great James Nachtwey!"

Nachtwey, the world famous war photographer, had in fact praised Ponomarev's skills to The Moscow Times before the interview. "Sergey's visual perception operates at a very high level. He has the ability to organize what he perceives in a compelling, complex manner using the full range of photographic vocabulary with great mastery," Nachtwey said.

Ponomarev's path to Pulitzer took him through wars, conflict zones and tragedies.

He worked in the Russian town of Beslan in 2004, where terrorists attacked a school and held dozens of children hostage. He covered "Nord-Ost," another Russian hostage crisis in 2002, when terrorists attacked theater-goers in Moscow. He documented atrocities in the war-torn Gaza strip in Palestine, revolution in Libya, the Maidan protests in Ukraine, and military clashes in eastern Ukraine and Syria.

However, Ponomarev refuses to define himself as just a war photographer. "You may think of me as such because there's a picture of me wearing a bulletproof vest on my website," he says with a laugh. 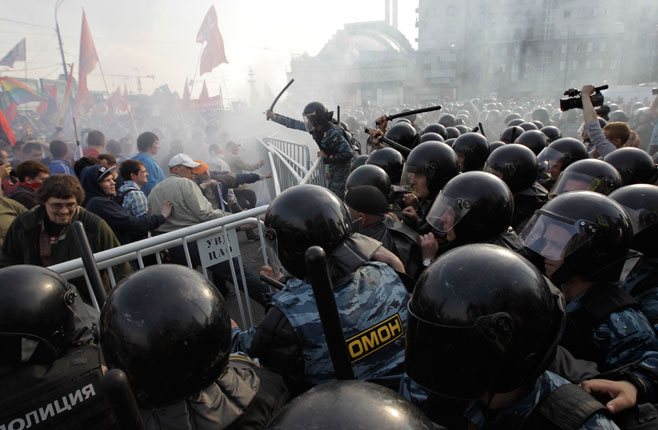 In Moscow, Sergey Ponomarev often covered protests and rallies, including the notorious one on May 6, 2012 that ended in violence and multiple arrests.

"But I see my role as simply developing stories that are meant to disturb the world."

He is a frequent contributor to The New York Times, which he says is currently his "most active" working partnership. Previously he worked for nine years as a staff photographer at the Associated Press news agency and contributed to Russian outlets including the Kommersant newspaper and Gazeta.ru.

"The media in Russia has changed a lot since then," he says. "The vast majority have lost their independence and are now on one or the other side of the fence. I prefer to work for outlets that are more independent."

Ponomarev is lucky to partner with a newspaper like The New York Times, says another illustrious Russian war photographer, the multi-award-winning Yury Kozyrev. "It is great that they give photographers time and resources to pursue important stories, like the refugee story," he told The Moscow Times. "Its rare these days, and not only in Russia, but the whole world."

"People see the world through our eyes," says Ponomarev. "I attended a conference on refugees once. The speakers were all about numbers and statistics, and I could tell no one there had ever seen these refugees. My speech was the last one that day — and the photographs I showed simply bowled the audience over." Photography is a universal storytelling language, he says. "People don't need to know a foreign language to understand photographs."

Arguably, photography is losing its power to change the course of events. No longer can it stop a war like it could in the 1960s and 1970s, says Ponomarev. 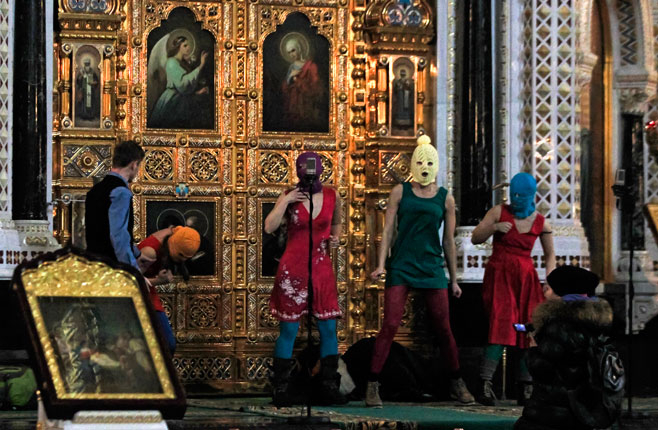 The punk rock protest group Pussy Riot performing in the Christ the Savior Cathedral in 2012. Two members were sentenced to two years in prison.

Then, the whole world was shaken by Nick Ut's image of a naked girl running from a napalm attack in Vietnam, and by Eddie Adams' picture of a police chief executing a young man in the street in war-torn Saigon.

"Those explosive images made society demand an end to the war," he says. "Now serious photographs with bloody or violent scenes are hidden behind age restrictions and notes that sensitive people shouldn't look at them. They don't shock people as much."

Occasionally, society is moved to act. Images of a drowned three-year-old Syrian boy washed up on a Turkish beach caused public outcry across the world.

It prompted heated discussion and divisions inside the professional community as to whether such disturbing images should be published. "Personally I'm against all these restrictions," Ponomarev says.

"The more people see injustice, the more they are willing to change it," he adds.

The other major threat for serious photographers is the increasing battle for visual attention with light entertainment.

"We are losing the battle with kittens and boobs," the photographer concedes. "But I'm certain we won't lose in the end — kittens and easy visual pleasures might be constants, but we are always coming up with something new."