More crafts shops are appearing in Moscow every day, with more young men trading lucrative office jobs for the opportunity to make things themselves.

In recent years, Moscow dandies have been moving away from cafes, barbershops and Internet-related startups toward trades like blacksmithing, printing and woodworking, putting down their lattes and taking on hammers and screwdrivers amid more creative clusters taking off and expanding in the city, attracting more people to the handmade lifestyle.

According to Russian Venture Company, which provides funds to other smaller foundations, in Russia's capital the number of workshops and small "do-it-yourself" centers has been growing in the last three to five years. Moscow is not alone in this trend: The so-called maker movement — which unites people around handmaking things and devices — has been gaining popularity all around the world. Within the last 10 years there have been more than 100 "makers' fairs" held in different countries, during which young people have presented their products.

In Western countries, makers are mostly involved with robotics and innovative IT projects — and are supported by giant organizations like NASA and Intel, which poach the most talented makers and their inventions. In Moscow, however, handcraftsmanship has become one of the most widespread branches of the maker movement.

The demand for handcrafted goods — unique furniture pieces, handmade decorations and the like — has been increasing, with new Moscow restaurants, cafes and other public spaces opening almost every week and trying to create their own style and ambience. 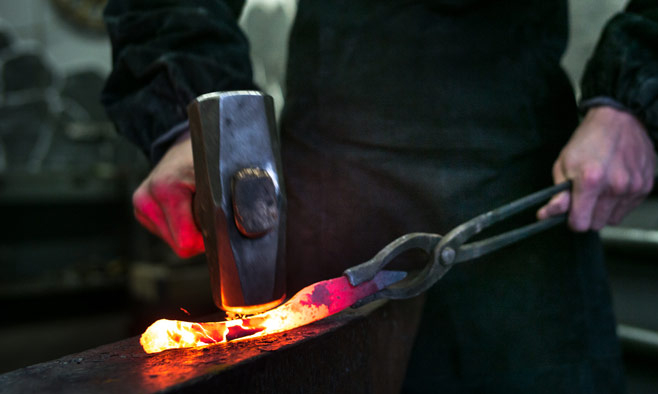 Shop owner Andrei Sosykin says forging a knife is something anyone, even children, can master.

For almost everyone it's about self-fulfillment, which seems to have become of the utmost value in the era of the "consumer society," a term that has recently gained strong negative connotations.

"Life in Moscow is much better now, people are earning enough money and have earned their 'status' — they have everything they want, so now they go for self-fulfillment," Andrei Sosykin, owner of a blacksmith's shop, told The Moscow Times.

Strike While the Iron Is Hot

Sosykin, 35, opened his blacksmith's shop in one of the studios of the Flacon design factory in northern Moscow in April, and said the interest in one of the oldest professions in the world grows every day.

"Blacksmithing is a traditional, ancient profession, and everyone can master it. We want as many people as possible to try working in this art," he told The Moscow Times.

Sosykin's shop doesn't produce things — instead, its sole purpose is to give its visitors a chance to try working as blacksmiths, or at least take a tour around the studio and get a glimpse of what the profession looks like.

During three-hour master classes, visitors forge nails and knives themselves, sometimes under the supervision of prominent blacksmiths. "No one leaves the shop unhappy," said Sosykin. "Usually very different people come to us: men, women, children, the elderly, but anyone who enters the shop lights up with interest immediately," he said.

Sosykin himself owns a knife shop, and at first he wanted to open a workshop devoted to making knives. "The smithery existed at Flacon before, it was the first workshop to open there," he said. The project was quickly shut down, though, because its owners didn't have clear vision of what to do with it.

The businessman decided to resurrect it, and plans to develop it in the future. "Currently it's more entertainment, and I would love people to come back and develop their skills," he said. Not in order to obtain a new profession and change jobs, but to be able to make something with one's bare hands, he added.

"Imagine how great it is when you walk into a house and see a hanger made by the master of the house, or a door knob," he said. 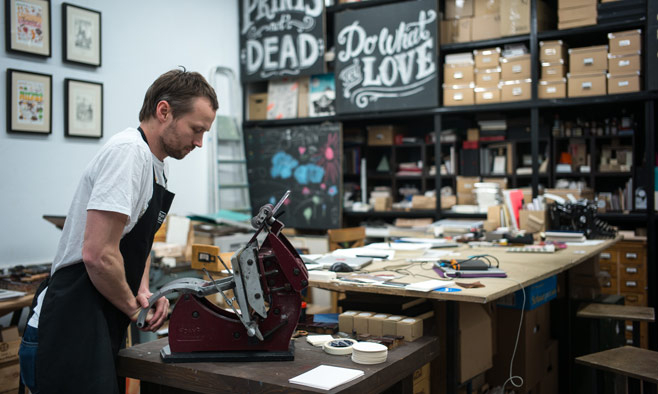 Sergei Besov, co-founder of the Demon Press workshop, is printing a card with an old-fashioned printing press.

He himself learns to forge from the blacksmith who works in the shop, and explores traditional craftsmanship. "We're trying to dig deep into the subject," he said. "For example, we have an ancient French anvil that is more than 200 years old and an English one that is more than 100 years old," Sosykin said.

The next step for the shop, which can currently accommodate eight blacksmiths during a master class, is to become profitable, the businessman added, "in order to expand its possibilities" and attract more people. At the moment a three-hour master class cost 3,500 rubles ($54).

For Sosykin's neighbors Sergei Besov and Yevgeny Perfilyev, owners of the Demon Press printing workshop at Flacon, a hobby — relief printing and linocut prints on high-quality paper with old-fashioned presses — has become a way to earn a living.

Besov, 39, and Perfilyev, 35, opened the workshop three years ago. Before that, both of them used to have different occupations and hadn't yet met. Besov worked as a designer and project manager for several upscale Moscow restaurants and bars, while Perfilyev, an engineer, was working for a company involved in the automation of electricity and oil plants in the southeastern city of Penza.

Nevertheless, their ways to a joint project started identically: they both bought antique printing presses.

"I was looking for ways to make crafted paper bags for one of the restaurants with linocut prints, and during my search found an old printing press on sale," Besov said. After a while he felt the urge to quit the job he said left him no room for development and started the printing business.

Perfilyev bought a small printing press because he has always been interested in printing. After having learned his way around the complex device he started selling prints on the Internet, continuing to work at his regular job for a while.

"I had a good career, but then the crisis of 2008 struck, and we started having fewer assignments, less work, but were still obliged to spend time in the office, and I didn't like that," he told The Moscow Times. At the same time the printing business grew, and Perfilyev decided to take a leap of faith. 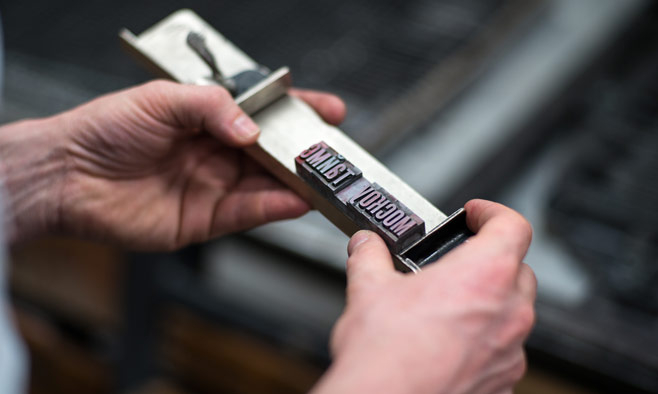 The Demon Press workshop has a whole collection of different typesetting blocks.

Several years later Perfilyev and Besov met and decided to go for a joint project, which is how the Demon Press workshop was launched. Currently it employs some 10 people, but in the very beginning it was just Perfilyev and Besov printing the things customers ordered.

"It's craftsmanship more than production," Besov explained. "We work with artists and create beautiful things," he said.

Both owners of the Demon Press said the main thing they get from their new business is gratification. "I finally get to have material results from my work — I create things I can see and touch," Perfilyev said.

One of the signature Demon Press products is a series of limited edition postcards at 250 rubles ($4) each.

The shop has been working for three years now, and, according to Besov and Perfilyev, brings in enough profit for them to live a comfortable Moscow life. "Of course, it would have been even better if the ruble rate hadn't fallen," Besov told The Moscow Times with a laugh. "But we earn enough to have it [the workshop] as our main occupation," he adds.

Unlike Besov and Perilyev, the owners of the Wood Deed furniture studio can't claim incredible revenues yet, though it has been in operation for almost four years now — but they believe the best is yet to come.

Alexei Inshakov, 33, who founded the studio together with his longtime friend Artyom Letunov, 30, is one of the rare business owners in Moscow that sees an opportunity in Russia's economic crisis.

"[Thanks to the crisis,] furniture from Europe costs a lot more now, and we finally have the chance to compete with Western suppliers," Inshakov told The Moscow Times with a laugh.

Inshakov and Letunov both worked in merchandising before starting Wood Deed.

"I was working at TsUM [an upscale Moscow department store], and I saw specialists from Italy and Britain helping to organize and remodel the space. At some point I asked: Why are there no Russians doing it? The answer was, 'Russians don't know how to do it.' I wanted to disprove that," Inshakov said. 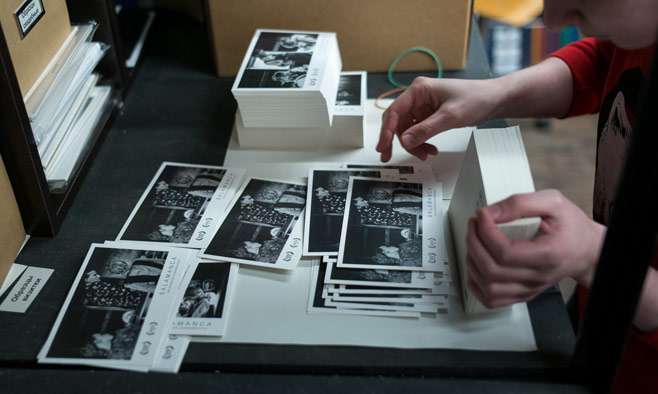 "We work with artists and create beautiful things," says Besov.

At first the friends devoted their time to specialized furniture that shops and stores needed, like racks and shelves, but then, step by step, they took on cafe and restaurant furniture, and later home furniture.

"In these almost four years we have learned to work with the wood from the ground up," Inshakov said. "Before starting on our own we hadn't had any experience with wood, except for woodworking lessons at school," he added.

The studio tries to incorporate elements of Russian traditional style into modern pieces. For example, one of the tables from the new collection will be in the form of the ancient Russian musical instrument the gusli, according to Inshakov.

Currently Wood Deed's team consists of four members. This week they plan to present their first-ever furniture collection that is not custom built.

"Our goal is to make several collections, including one that will be less expensive and therefore available to a greater number of people," Inshakov said. Right now an average table made by the Wood Deed studio costs more than 40,000 rubles ($620).

Inshakov and Letunov's decision at first elicited a very cautious reaction from their families, but in the end everyone was very supportive, and that's what, according to Inshakov, kept the young people going despite the difficulties.

Perfilyev and Besov from Demon Press printing echoed the sentiment. "Everyone really supported us," said Perfilyev. "After all, that's where we feel content at last," added Besov.