PODOLSK, Moscow Region — Four years ago, Russia had no national sledge hockey team. And Dmitry Lisov, the effervescent captain of the newly created Russian sledge hockey team, had next to no knowledge of the sport, no Paralympic silver medal and no wife.

Despite burgeoning public awareness and increased state funding, Lisov and his teammates face greater struggles visiting the supermarket or taking public transportation than they do dominating the ice.

"What's important is what you have in your head. That determines what you can or cannot do," Lisov said. "But having a good attitude doesn't matter if you can't get up to your apartment."

Lisov and his team are an unexpected success story for Russia. When Moscow hosted the 1980 Summer Olympics, it refused to host the Paralympics and claimed that there were no disabled people in the Soviet Union.

Times are changing, slowly but surely. And Lisov is a catalyst for this change.

Lisov's left leg was amputated when he was 3 years old. He says that as a boy he could never sit still. One day he ventured outside his grandmother's rural home in the Kursk region, some 500 kilometers south of Moscow. A truck loaded with bricks struck him as he dashed across a country road.

Lisov, now 24, says he remembers little of the accident and the long days spent in a hospital bed. But he recalls the rubber doll that the truck driver gave him, a desperate gesture to ease the boy's suffering.

Today, Russia's sledge hockey captain exudes confidence. Sitting in the tidy living room of his one-bedroom apartment — located in a dated Soviet-era building in the heart of Podolsk, an industrial city in the Moscow region — he pulls up the left leg of his pants, revealing his prosthesis composed of a titanium pylon and a plastic kneecap, shin and foot.

He isn't ashamed of his prosthetic leg. "I wear shorts in the summer," he said.

Lisov has never let his disability slow him down. He has always been athletic, having dabbled in different sports throughout his teens: football, table tennis, and track and field. He stumbled into hockey in fall 2009, months before the Vancouver Winter Olympics, where Russia would not be represented in sledge hockey.

He was approached by a representative of the Moscow region administration's sports department, who suggested that he take up the sport.

Hockey was foreign to Lisov, who admitted that his knowledge of the sport was limited to the Russian household names of Alexander Ovechkin, Yevgeny Malkin and Pavel Datsyuk. When hockey came on television, he would usually change the channel.

Despite his reservations, Lisov decided that sledge hockey was worth a shot. Lacking proper equipment and instruction in the early days of training, the players that won silver in Sochi glided around a hardwood floor, sitting on dish rags. They also learned the basics of the sport by watching two of the world's top national teams: Canada and the U.S.

"I remember that we watched online videos of the Canadian and American sledge hockey teams," Lisov said. "We tried to imitate them, to understand how we should play. We have come a long way since then."

The Russian team, built from scratch by veterans of the Chechen wars and enthusiastic first-timers like Lisov, caught on quickly.

By now, Lisov makes a comfortable living playing sledge hockey. He and his teammates receive funding from the Sports Ministry and regional government organizations. MegaFon, the telecommunications giant that sponsored the Sochi Olympic and Paralympic Games, contributed 72 million rubles ($1.3 million) to the sledge hockey program ahead of the Olympics and has committed another 30 million rubles ($560,000) for the next four years.

Last year the team won bronze at the International Paralympic Committee Ice Sledge Hockey World Championships A-Pool in South Korea, where Lisov led his team in scoring with four goals and one assist.

In the last major international sledge hockey tournament ahead of the Sochi Olympics, Russia outscored Sweden, Norway and Czech Republic by a combined score of 21-1. 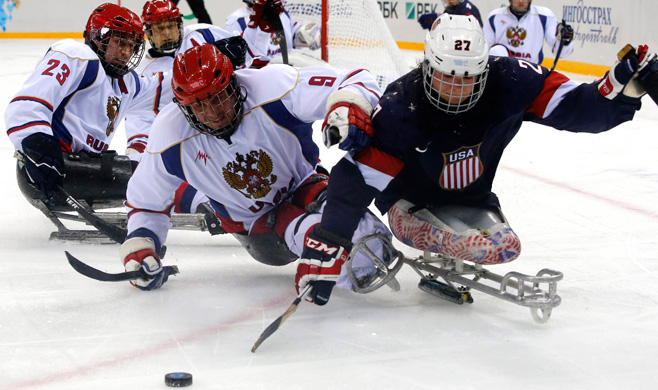 Members of Lisov’s team fighting the U.S. team for the puck during the 2014 Sochi Paralympic Winter Games.

As host nation of the Sochi Olympics and Paralympics, Russia automatically earned a spot in the sledge hockey tournament.

Lisov was named captain of the team in January, two months ahead of the start of the Paralympics.

"I was named captain because of my knowledge of foreign languages," he said. "I know some English, and this allows me to communicate with referees at international tournaments."

Not only did Lisov's affinity for the English language help him to communicate on the ice; it also guided him to his future wife, Yekaterina, who was working as an interpreter for Russia's Paralympic Committee.

Lisov says that he was drawn to Yekaterina's "beautiful eyes and smile," and that his admiration became mutual after he impressed her with his English-language skills. The newlyweds' humble Podolsk apartment, brimming with Paralympic memorabilia and foreign-language novels, tells their story.

"When I was younger I sometimes thought girls would never be interested in me," Lisov said. "But when I became active in sports, I realized that a bunch of the guys had wives and girlfriends. I knew then that it would be possible for me too."

The defining element of Lisov's athletic and personal life is prominently displayed on a wooden cabinet in his living room. Tucked between an array of pucks from international hockey tournaments and a framed photograph of a beaming Lisov with President Vladimir Putin, the captain's Olympic silver medal glistens.

"This medal is the most precious thing I have after my family and my wife," Lisov said, cradling it in his hands.

Lisov is determined to compete at the Pyeongchang Winter Games in 2018 and, this time, bring home Paralympic gold. But the 24-year-old has other lofty ambitions as well: to help improve the lives of Russia's 13 million people with disabilities.

"My goal is to always be useful," he said. "I hope to someday earn a management degree and take part in the government, in the regions or somewhere else. I don't know what form this could take, but I want try to make things better than they are."

Having ratified the Convention on the Rights of Persons with Disabilities in 2012, Russia is currently implementing a four-year, multibillion-ruble Accessible Environment Program, which allocates federal funding to increase the accessibility of health care, education, transportation and other public services in many Russian regions. At his annual state of the nation address last week, Putin proposed an extension of the program to 2020.

One of the program's main objectives is to ensure that 45 percent of priority locations in Russian regions will be made accessible to disabled people and individuals with limited mobility by 2016. In 2011, the Russian government estimated that a mere 12 percent of these locations were accessible.

But a scarcity of accessible apartments, public buildings, health care facilities and public transportation systems remains. The inaccessibility of the outside world sometimes leaves people with disabilities trapped in their apartments, preventing them from having a career or enjoying an active social life.

"There has been great progress in a short period of time," Lisov said. "But there's much more to be done."

The chief organizer of February's Winter Olympics in Sochi, Dmitry Chernyshenko, has been hired as the new president of the Russia-based Kontinental...
seeking dialogue

Ukraine Leader Calls for Talks with Russia Amid Invasion Fears

The Kremlin appeared to pour cold water on the idea, reiterating that the war was Ukraine's domestic issue.
pointing fingers