Over recent decades, the transforming face of Moscow has become a vivid symbol of Russia's topsy-turvy economic growth. Booming and at times unruly, the Moscow real estate market was once opaque and insular, but has increasingly opened up to investors from all over the world.

With sanctions spurring capital outflows and ever-gloomier forecasts casting a pall over Russia's economic prospects, The Moscow Times sat down with Colin Dyer, president and CEO of international commercial real estate consultancy Jones Lang LaSalle, or JLL, for a bird's eye view on the current crisis, the long-term trends playing out on the Moscow real estate market and why Russians still aren't big players on the global property market. 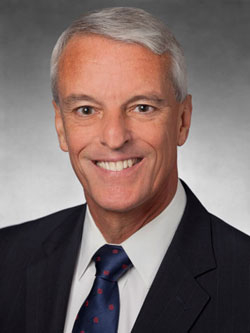 Q: How have the slowdown in Russia's economic growth and worries over Western sanctions affected the Russian real estate market?

The initial impact on demand has been so far muted in that there's still demand for retail space, good retail space, and good office space in Moscow and the major cities, and that so far is holding up quite well compared with the investment market.

Nevertheless, there is going to be a reduction in that demand for space as companies wait and hold back on expansion plans. And, at the same time, product is still being delivered into the market, because the development pipeline is not one you can stop overnight. So we would expect to see the vacancy rate in office space, for example, climb in Moscow as stock comes into the market, and we'd expect to see rental rates decline as supply keeps coming and demand drops away.

In retail the pattern is the same, but so far retail sales have held up quite well, so there's been no real fall-off in demand for space. In the industrial sector, the vacancy rates have been very low and remain very low, so that's likely to continue to be quite healthy.

In the sales area, the market has dropped from about $8 billion last year in total sales and we think this year it will be closer to $3.4 billion. There's a significant fall-off and a significant slowdown in transaction velocity and demand. There is less Western capital in the market really looking to buy, so it's become mostly a domestically dominated market, the transactions that are happening are between Russian buyers and sellers.

That's triggered obviously by the uncertainty around the current environment. People are waiting.

An important difference between now and [the financial crisis of] 2008 is that in 2008 people's financing was under stress, people were really concerned about big drop in values, and so there was a market in distressed assets. This isn't the case at the moment, because people have fundamentally financed things in much more conservative ways over the last five years. The crisis taught them a lot.

At this point, at least, equity and debt has been available, and so no one has been pressured and stressed into having to sell. So that also is holding the investment markets in this standoff.

Q: What is needed to get the markets up and rolling again?

Confidence returning is what has to happen. It's not obvious how that happens, other than that diplomats have got to get together and sort out a way to get on the path of improvement in relations between Europe and Russia.

As it comes back, the first people back into the market will be more domestic capital and then the more opportunistic private equity funds, doing the same things they did in Ireland and Spain after their markets froze. They go back and see opportunities and buy on opportunity.

Q: How has the crisis impacted JLL?

What we're seeing this year in Russia is very similar to last year. The investment sales business is slower, but we're seeing an increase in activity in advisory, property management, leasing, because I think people are coming to reliable suppliers in a difficult situation when markets are hesitant. Next year, who knows, things could change. But our policy will be that we don't withdraw, we don't panic.

It's very hard to enter any market, it's a lot of work, and it took 22 years to build what we have here. You don't throw that away just because there's a temporary period of difficulty.

Q: What advice would you give to foreign businesses considering a move to Russia, based on JLL's experience here?

Going back 22 years, Russia was clearly a developing country. When a country's coming from a difficult history and a low level of initial economic growth, things are never linear. It's going to show rapid growth and sudden drops, which will be driven by the economic cycle, by the interest rate cycle, by inflation and sometimes political issues. It is not a smooth ride. You have to accept that you're going to have some exciting times, and as a business, you mustn't panic. It's hard to move in, it's difficult to move out, but you never go back in if you leave. People won't trust you anymore.

So before you go in you really have to understand that and say, "I am prepared to invest and take the losses through to the period when I have a stable business." And that will be years, not months.

Q: How has the Moscow real estate market changed since you first visited in 2004?

The single word that encapsulates things is that it's become much more "professional" as a sector, in all ways. For example, the process of permitting, particularly in Moscow, has become much easier over the last two years, it's become much more transparent. The standards of construction have become more international and higher-quality, and the demand for buildings which perform in a sustainable way, so LEED or BREEAM-qualified buildings, has grown.

It has also become a much broader, deeper market. There are multiple buyers for any asset that's available, it's got a level of price understanding that is much clearer than it was 10 years ago. It's becoming a true investment market.

Q: How has the transparency of the market changed?

You would have said ten years ago that the Moscow market depended heavily on contacts and influences and was opaque, frankly. That is changing quickly, although there is still a lot of information in the market that is not broadly known.

This changes because international capital demands and requires a level of transparency in order to invest with confidence, and domestic capital too over time gets to understand the benefits of operating in an environment where things are transparent, in other words, where their investments are protected and they have clarity on pricing.

Q: What makes the Moscow market unique from other international real estate markets?

What Moscow is doing is effectively building a modern city in the middle of a mixture of former industrial architecture and some magnificent historic buildings. And so there's a whole process going on of bringing the city up to being a modern, commercial business city.

If you go back to when I first came 10 years ago even, there were very few tall buildings here. Moscow-City [a commercial district in central Moscow] didn't exist, that's been the last six years in the making. The speed of change in the face of Moscow is probably one difference from Paris or London or New York, where there is change but it's much slower, and where the basic fabric of the city has been well-established for a long time.

Q: What role do Russian investors play on the international real estate market?

There's no single place they've been going to. They've been investing in apartments in London, in development deals in Dallas. There's been no real pattern to it, and it's not been huge sums of money.

Compare with, for example, Middle Eastern investors, who've been investing solidly and programmatically in Grade A assets in the major cities of the U.S. and Europe for a decade now. Chinese money has been quite directed toward development projects in Europe and the U.S. There's much more pattern there. What we've seen with Russian money is that it's much more individual projects in individual places with no real strong trend to it.

That was the case till about six to 12 months ago, we've seen a lot less Russian money going into international projects or investments since then.

Q: Why is Russian investment abroad so limited?

Russian money has actually been much more interested in investing in Russia because the returns are better, obviously much better, especially in the development area. The opportunities at home, which are perceived as lower-risk, have been attractive enough that the capital hasn't wanted to move internationally.

That may change with the current tensions, people may take a more portfolio view of their investments and look to invest internationally also. One of the big issues at the moment is capital leaving Russia [the Central Bank predicts $128 billion in capital flight this year]. So if it is going to continue leaving Russia, it will find a home somewhere.

Philippe Pegorier describes himself as a "bridge" between Russia and the West, and in speaking with him it doesn't take long to see why.
'Insufficient evidence'

Ukrainian President Volodymyr Zelensky used a visit to London on Wednesday to urge allies to send combat aircraft to his war-torn country as Britain promised...