Contribute Today
By Jennifer Monaghan
May 19, 2014

Foreign Minister Sergei Lavrov has asked the OSCE to help secure the release of two Russian journalists who are reportedly being held by Ukrainian soldiers in the eastern Ukrainian town of Kramatorsk.

The journalists' employers, online portal LifeNews, reported Sunday that the pair had gone missing while on an editorial assignment in the southeast of Ukraine.

It was not clear why the two men — Oleg Sidyakin and cameraman Marat Saichenko — were detained, LifeNews reported.

LifeNews, which is known to have close links with the Russian security services, also published a video on Monday that it says shows the duo lying on the ground with their heads covered and their hands tied behind their backs while armed guards keep watch over them.

Personal items possibly belonging to the two men, including passports, credit cards and press passes, are also shown in the video, as is an unidentified third detainee.

LifeNews said the soldiers in the video, which has been circulated by the Ukrainian media, are members of the Ukrainian National Guard.

Responding to Lavrov's request, Didier Burkhalter, head of the Organization for Security and Cooperation in Europe, or OSCE, said his agency would immediately take up the matter, Russia's Foreign Ministry said Monday in an .

The ministry's human rights commissioner, Konstantin Dolgov, called the detentions "a gross violation of media freedom," adding in his that "illegal arrests by the de-facto Ukrainian authorities should be put to a stop."

Since the annexation of Crimea in March, a number of foreign journalists have been held against their will in Ukraine. 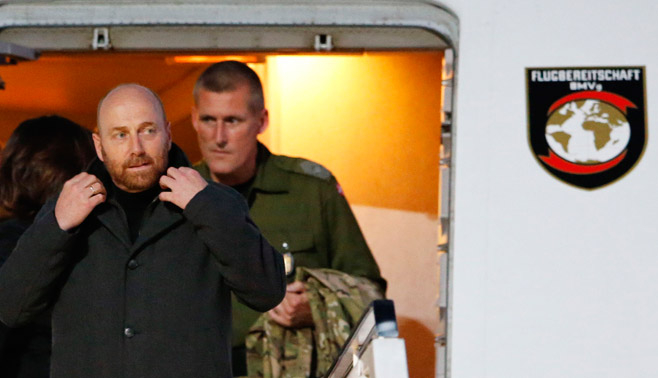 OSCE observers exit a German military aircraft after being released by pro-Russian forces in east Ukraine.

Last week, a correspondent from Russian investigative newspaper Novaya Gazeta was detained overnight in the city of Artemvisk, while in April American journalist Simon Ostrovsky was held for more than two days before being released by separatists in Slovyansk.

Dunja Mijatović, the OSCE's representative on media freedom, condemned the continued harassment of journalists in Ukraine. "I reiterate my call to all sides to stop intimidating and threatening members of the media and to let them do their jobs," Mijatovic said Monday in an OSCE statement.

Last month, pro-Russian insurgents in the eastern Ukrainian town of Slovyansk detained eight OSCE military observers. One of the observers was released after two days because he had a mild form of diabetes, while the rest were held captive for more than a week.