The Glonass system was launched to provide Russia with its own navigation data for military and civilian applications, and to secure a cut of the commercial benefits currently enjoyed by the U.S.'s Global Positioning System, or GPS. 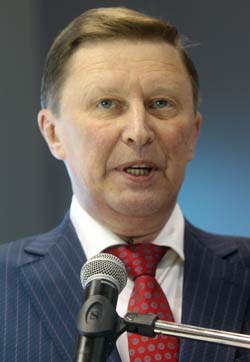 GPS can currently deliver navigation data with an accuracy of 1.8 meters, while Glonass is accurate to 2.9 meters, and Russia is keen to make up ground, Kremlin chief of staff Sergei Ivanov said.

"GPS is still ahead of us, but the gap continues to shrink. We will catch up," Ivanov said at the International Satellite Navigation Forum in Moscow, Interfax reported.

"To do this, we will create ground stations abroad. In the long term, or ideally, we would like to have about 50 stations in 36 countries," he added.

At present, Glonass only has foreign ground stations in Antarctica and Brazil and Ivanov said that building more of them will greatly expand the penetration of Glonass on global markets.

A request by Russia's Federal Space Agency to place ground stations in the U.S. was opposed by the CIA and the Department of Defense, the chief concern being that they could be used for spying on U.S. soil, .

The U.S. operates GPS ground stations throughout the world, but not in Russia.

Russia has been developing its own satellite navigation system since 1976, completing the first stage of the Glonass system in 1995, but due to a lack of funding it was not brought online.

In 2001 President Vladimir Putin said Glonass was a project of national importance and called for efforts to be redoubled to refurbish and complete the system.

The legendary mountain region of Svaneti has turned into a cryptocurrency mint, resulting in chronic electricity shortages.
show of support

Blinken in Kyiv to Back Ukraine as Putin Stares Down West

After talks last week failed to ease fears, the White House warned that Russia was ready to attack Ukraine at "any point."
russia's response

The White House upped its threat assessment ahead of a meeting between the top U.S. and Russian diplomats.