ARALSK, Kazakhstan — It was his father, a fisherman, who lost his grip on the young boy. Murat Sydykov was only 2 at the time, but now, almost 70 years later, he remembers every detail of the event.

6 Quick Facts About The Aral Sea

1. The Aral Sea is an endorheic lake in Kazakhstan and Uzbekistan.
2. The lake is situated in a hollow with a large catchment area. It is fed by two rivers: the Amu Darya and the Syr Darya.
3. Before the lake began to shrink, the fishing industry employed 40,000 people. One sixth of all the fish in the Soviet Union was sourced from the Aral Sea.
4. Since the 1960s the surface area of the lake has been reduced by 90 percent due to the Amu Darya and the Syr Darya being diverted for irrigation purposes — primarily, to supply cotton fields.
5. Most consider it impossible to save all of the Aral Sea. It is, however, possible to save and replenish the North Aral Sea in Kazakhstan.
6. Kazakhstan has dammed up the water in their segment of the Aral Sea and improved the water flow from the Syr Darya at a cost of $86 million, of which the majority is a loan from the World Bank. The region has largely been replenished as a result.

The autumn night and the frigid waters of the Aral Sea. Struggling, entangled in fishing nets, as he was pulled into the deep. By the time he was dragged from the water, Sydykov was in bad shape — his face would never be the same again. To this day, his mouth is disfigured by a partial paralysis.

Everyone knows of Murat Sydykov in Aralsk, a poor provincial city on the former banks of the Aral Sea in Kazakhstan. He is the great poet and musician of the region. His instrument is the dombra, a two-stringed lute, and almost all of his songs engage, in one way or another, with the Aral Sea.

Sydykov is seated at the family dining table in his Aralsk home, enjoying a mouthful of liver stew prepared by his wife, Bazar. He attempted to explain the bond that has existed between him and the lake ever since that fateful night when he fell into the water.

"When I started out as a musician I wrote happy songs, about the love for fisher girls and about the Aral Sea being my mother," he said. "But then the lake began to retreat, the fishing boats returned without fish. I was stricken by great grief and after that I started to write a different kind of music. Sorrowful music." 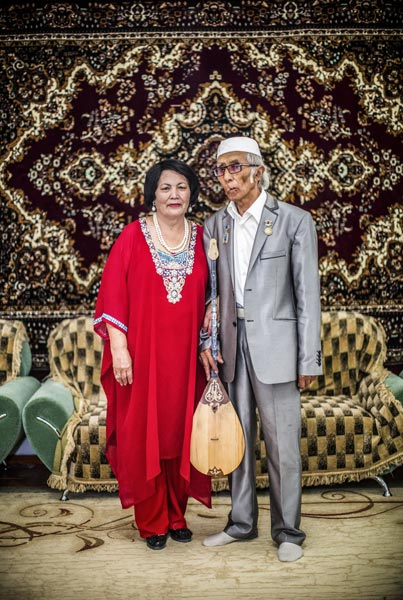 Bazar and Murat Sydykov live in a large house on the outskirts of Aralsk.

For thousands of years the Aral Sea has continuously changed shape, expanding and retreating. During the 20th century, however, the waters receded farther than ever before.

To a large extent, this disastrous environmental event was the product of Soviet-era cotton farming. During Lenin's reign, the Soviet Union declared their intention to become self-sufficient in cotton production. Stalin went even further, proclaiming that the Soviet Union would be the world's leading producer of the crop. 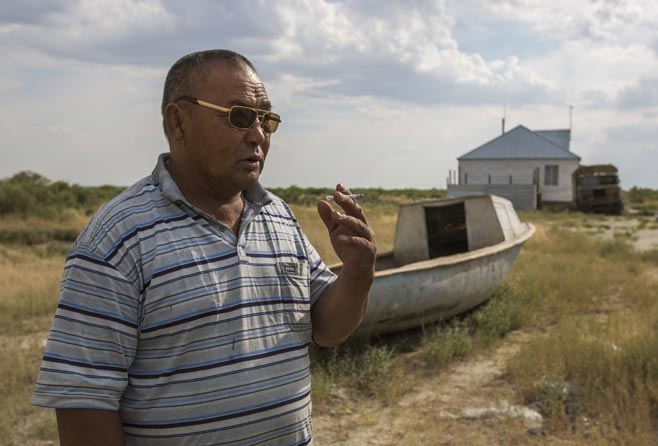 Fisherman Aidar Zhusupov has earned a living from the Aral Sea since 1976.

The land best suited for this purpose was located in Central Asia, but vast quantities of water were required to irrigate the arid plains. In the 1950s, a massive system of canals was established to divert the Amu Darya and the Syr Darya, the two rivers that fed the Aral Sea, in order to supply the new cotton fields. The dramatic diminution in the lake's volume could not have escaped the Soviet government's notice, yet production continued to grow.

In 1960, the area of the Aral Sea was 68,000 square kilometers. In the decades since, the surface area has shrunk while the salinity has increased. The fish have disappeared, the fishing industry collapsed, the climate altered, standards of public health deteriorated, and poverty has spread out over the enormous desert that was once the lake floor. Today, only 10 percent of the original lake remains, mainly divided into one lake in the north, and two in the south. 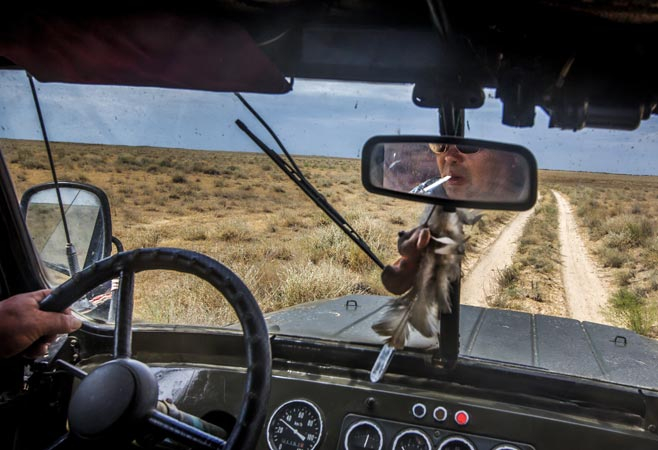 To reach the Aral coast from Aralsk, Zhusupov drives through an old lakebed.

"When the lake began to shrink many people moved and the economy deteriorated radically," said Ainakul Uderbayevna, president of Aral Tenizi, a local help organization that supports fishermen.

While the situation of the lake remains critical, she said that things are looking brighter along the northern shore. People are moving back to Aralsk. This new influx is the result of a dam built in 2005, assisted by a substantial loan from the World Bank.

The northern section of the lake is located in Kazakhstan, while the majority of the southern parts lie in Uzbekistan. The dam separates the northern part of the lake from the two sections in the south. On the Uzbek side, the government continues to prioritize its lucrative cotton industry, and the extraction of gas and oil reserves hidden under the land that was formerly a part of the lake bed. Kazakhstan, in contrast, has made an effort to replenish the North Aral Sea, feeding it with water from the Syr Darya. 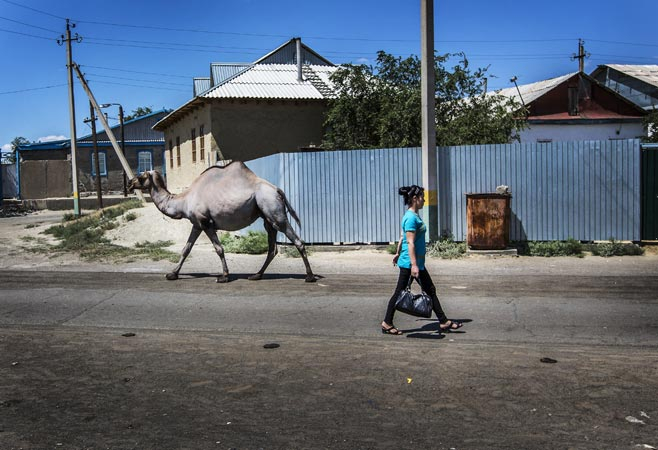 The streets of Aralsk, an old harbor city, are occupied by people and camels.

As a result of the dam, the water level in the north Aral Sea has risen from 30 meters to 42 meters in just a few years, effectively reducing the great clouds of sand, salt and chemicals from the old lake bed that sweep over Aralsk. Most important, with more water in the lake and a drop in salinity, the fish have returned, reviving the region's fishing industry.

"There are plans for more dams to be built and for improvements of the flow of the Syr Darya, and after that the lake can rise to 47 meters," Uderbayevna said.

In the 1990s, only around 100 fishermen remained in the region surrounding Aralsk. Today, there are close to 700. Aidar Zhusupov is one of them. Squatting by his jeep on an autumn evening, he chain-smokes and watches the sun go down over the lake, while fellow fishermen head out to empty the nets. 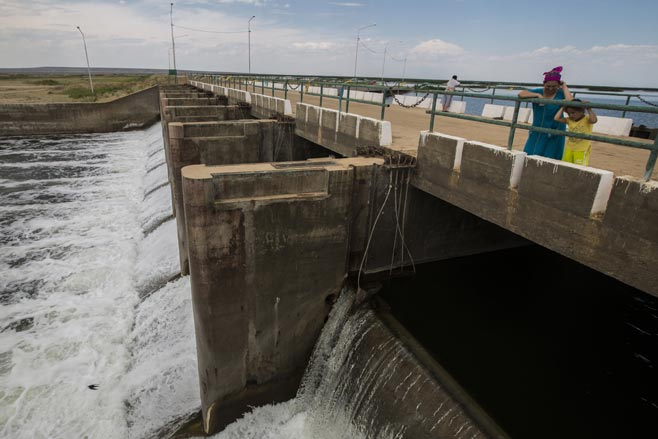 The Kokaral dam, built in 2005 with the aid of a World Bank loan, made it possible to save a part of the Aral Sea.

"I began to fish in 1976. Then the shore was very close to my home village, Bogen," he told me. "But for every day that passed it moved further and further away. At first we were not that worried, the lake has shrunk before throughout history and it has always returned. But finally we understood that this was something else."

By 1978, Zhusupov had to buy a motorcycle in order to reach the lake's edge. The catches grew smaller and smaller. But to abandon his profession, as many were forced to, was not an option for him.

After a couple of hours, the fishing boats return. Even though it is low season, they bring back several hundred kilograms of fish. 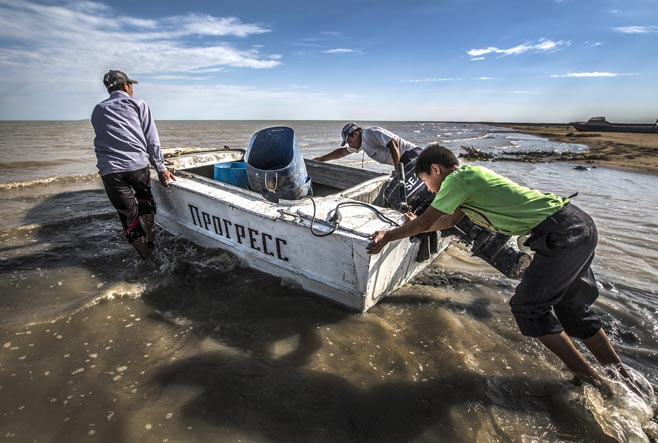 Prior to 2005, the volume of fish caught in the North Aral Sea was minimal. Thanks to the dam, fishermen are now able to bring in thousands of tons per year. While this is a far cry from the generous catches of the pre-Soviet era, the increase has changed the lives of many inhabitants of the old fishing villages.

"Recently we bought a new fishing boat and we have been able to build a new house," said Aidar's brother, Galymzhan Zhusupov. 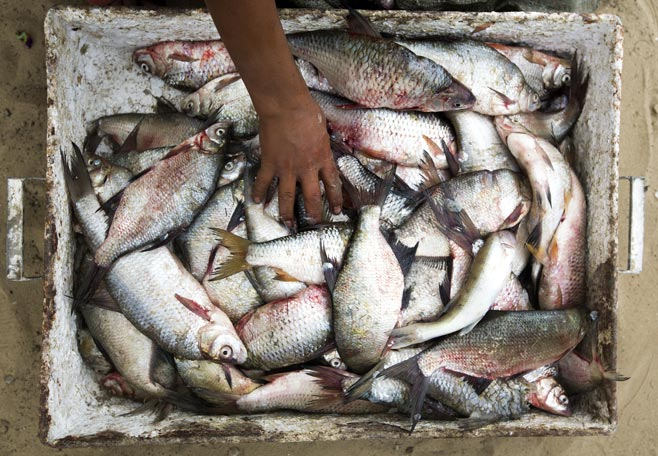 The roach is a freshwater fish now found in ample numbers in the north Aral.

He issues licenses for some 50 boats and, most of the time, his cold stores are well-stocked. The fish is sold to several former-Soviet states.

"Life is fun. It is fun to work. The economy of the region grows every year, new houses are built. If only the authorities make sure to further raise the water levels, we will have a bright future." 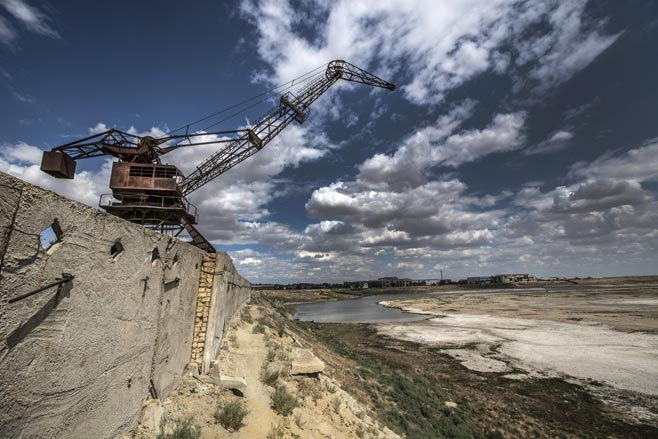 Rusty cranes and several old hulls are all that remain of the port in Aralsk.

Things have also changed for Murat Sydykov, the Aralsk musician whose life is so intimately intertwined with the destiny of the lake. He has begun to write cheerful songs again.

While the harbor of his hometown is still dry, its port eaten away by rust, the water crawls steadily closer and is now only 25 kilometers away. The authorities hope that, in a few years, it will reach the harbor again. Murat will be waiting, ready to embrace his returning mother.

"I am writing music to welcome the lake back to Aralsk," he said. "The day the water returns I will arrange a big orchestra concert in the harbor and perform the new music. It will be a symphony for the water's return."