The Olympic Games seemed a golden opportunity for the Moscow tourism industry, with the majority of tourists bound to pause in the capital on their way to Sochi.

But the city has not been deluged with Olympic visitors. Those few who have stopped in Moscow have been quick to leave — few have booked hotel rooms in the city center, hoteliers said.

Keeping their fingers crossed, authorities and the tourism industry are betting that more tourists will stop in on their return journey.

Most trains and flights to Sochi from the Russian regions go through the capital, and direct international flights are only available from Germany and Turkey, so the majority of travelers have a forced layover in the capital.

While precise statistics are elusive, "tens if not hundreds of thousands of Russian and foreign tourists" will pause in Moscow on their way to the Games, said Sergei Shpilko, chairman of the city government's committee on tourism and hospitality.

This is a substantial influx for Moscow, which receives on average about 500,000 recreational and business tourists a month, Shpilko said.

The tourism industry responded with a bevy of special deals for athletes, volunteers and spectators, hoping to encourage a sojourn in the capital on the way to or from Sochi.

Accommodation, museum tickets, bus-tours, cruises along the Moscow River — all come with discounts for those who can present a pass to the Olympic or Paralympic Games.

Forty hotels and more than 80 businesses in total are participating in the discount program, while upwards of 600 volunteers have been stationed at airports and hotels to help guide tourists to their destinations.

Several tourist attractions, such as the Moscow Museum of Modern Art and the Moscow Zoo, have translated their exhibits into English for the first time and are arranging events for English-speakers in an effort to accommodate foreigners.

The point of it all, Shpilko said, has less to do with making money than with "highlighting the hospitality of the Russian capital."

Sergei Shpilko, chairman of the city government's committee on tourism and hospitality.

But a week into the Games, many of Moscow's hotels have yet to see a substantial increase in business.

"The market is in general operating normally, without any impact from the Olympics," said Konstantin Goriainov, general manager of the Hilton Moscow Leningradskaya hotel.

Despite offering a 10-percent discount and a free river cruise for fans and athletes, the five-star Radisson Royal hotel has not seen a significant upturn in bookings, the hotel's PR service said.

"Most Olympic tourists are trying to get to Sochi as quickly as possible … but a decent portion of them are nevertheless going into the city for a day or half-day," Shpilko said. Many hotels in the capital have in fact reported an increase in bookings, he said.

The one sector that is witnessing an unequivocal boost is Moscow's airport hotels, which have taken to their role with a blend of national pride and cheerful opportunism.

"We stand at the front lines and should do everything to make sure guests of the Olympics have a positive opinion of our country … Besides, we hoped that by offering special rates for Olympic guests we could advertise our hotel to a wide range of potential clients," said Marina Lazareva, director of sales and marketing at the Ramada Moscow hotel near Domodedovo Airport.

The Sheraton hotel by Sheremetyevo Airport has also hopped on board, cutting rates by almost two-thirds for Olympic tourists, and is anticipating an overall increase in bookings of between 3 and 5 percent, sales and marketing director Tatyana Tumarkina said.

Roots of the Problem

If foreign tourists are loathe to linger in the capital, part of the problem lies not in Moscow itself but in conditions at their final destination.

Luxury tour agency Travel All Russia had anticipated "much more interest in travel around Olympics time," but the situation in Sochi thwarted the company's efforts to design package tours including stops in Moscow and at the Olympics, said director of sales Natalya Pakhomova.

Hotels refused to quote their rates or confirm availability until the very last minute, she said. As a result, visitors were forced to either buy expensive ticket-hotel combination packages from agencies authorized by the Olympic Committee, or to buy their tickets separately and pray they would find accommodations in Sochi before the Games.

Many travelers thus forewent the Games altogether, leaving Travel All Russia with about 50 percent fewer orders than they had expected, Pakhomova said.

While logistical difficulties have kept some would-be spectators and travelers away, for others, chilly February just did not seem an opportune time for exploring Russia.

Texas-based sports tourism agency Ludus Tours is bringing 250 spectators to the Games — fewer than they had expected. Of those heading for Sochi, only one group of 25 arranged a side-trip to Moscow, managing director Adam Dailey said.

Ludus Tours would typically expect about 50 percent more add-on excursions during an event of this scale, Dailey added, attributing the lack of interest to the season and Americans' limited vacation time.

Too Soon to Say

But even if the signs are less than encouraging, it is too early to reach definite conclusions.

"The impression we are getting is that more tourists are planning to stop on their way back," tourism committee chairman Shpilko said.

Sergei Lavrentyev, president of double-decker bus company City Sightseeing Russia, is also anticipating a surge in business after the Games.

"I hope there will be way more customers after the Olympics, when athletes have some spare time, when they are not under so much pressure," Lavrentyev said. His company has offered a 20-percent discount on its bus tours for Olympic participants, spectators and volunteers.

Lavrentyev is enthusiastic about the potential of international sporting events to energize the Moscow tourism industry.

When City Sightseeing offered similar discounts for two events in 2013 — the Rugby World Cup Sevens in June and the IAAF World Championships in Athletics in August — the company saw "a remarkable number of passengers," Lavrentyev said.

The effect may be muffled this time around due to the cold, "but there will definitely be more business than last year," he added. 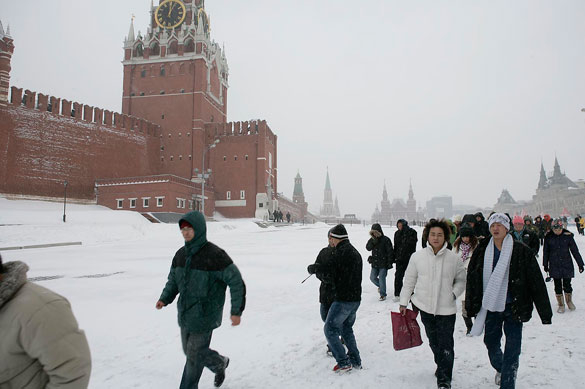 Tourists sightseeing outside the walls of the Kremlin on a snowy Red Square.

Ultimately, even if the numbers are not quite what could be wished for, the Moscow tourism industry seems to be taking a long-term view.

"At the most, we want to make those who are passing through Moscow pause and consider that it could be worth returning as a tourist, not for one or two days, but for a longer period," Shpilko said.

Even more than guests' experiences in Moscow, however, international feelings towards the Sochi Olympics could impact the capital's tourism industry in the coming years.

"What is happening in Sochi now is forming to a great degree the perception of Russia, including, indirectly, Moscow," Shpilko said.

Especially when presented well to the international public, major sporting events in Russia tend to increase interest in the country as a tourism destination, Travel All Russia's Pakhomova said.

The heightened visibility encourages foreigners, particularly those who have previously considered visiting Russia, to sign up for tours. Some of them will then come "later in the year or in years ahead," she said.

From a tourism perspective, the success of the 2018 FIFA World Cup, to be hosted in Moscow and 10 other Russian cities, especially hinges on the international reception of the Olympics.

South Africa, which hosted the last World Cup, welcomed almost 310,000 foreign visitors in 2010, and the Brazilian Institute of Tourism estimates that 600,000 tourists will attend this year's championship, the International Business Times reported.

While the 2018 World Cup will likely generate more spectator tourism than the Olympics, "a lot will depend on Sochi and how the Russians are as hosts, as well as security and the Russian anti-gay laws," Ludus Tours' Dailey said.

As with the Sochi Olympics, the Moscow tourism committee is looking forward to the World Cup less as a chance to make money than as an opportunity to firmly establish Moscow's reputation as a tourist destination.

"I think it will be a shining opportunity to present Moscow as an absolutely modern, international tourism center, meeting all global standards," Shpilko said.