With the 2014 Winter Olympics due to begin Friday in Sochi, the eyes of the world are firmly trained on Russia's restive and unstable North Caucasus region. In the run-up to the Games, the media has been filled with journalists complaining about dirty water, bad toilets and stray dogs at their Olympic accomodations, but little has been written about the impact the Games will have on Sochi locals and the many problems facing the larger Caucasus region. This is precisely what Dutchmen Rob Hornstra and Arnold Van Bruggen sought to discover in their five-year slow journalism report "The Sochi Project. An Atlas of War and Tourism in the Caucasus."

Hornstra, a photographer, and Van Bruggen, a writer and filmmaker, made headlines in July 2013 when they were denied visas to enter Russia, curtailing the exhibit of their work that was intended to go on display in Moscow last fall. However, Muscovites can still see all their work, either on their website or in the recently released book published by The Aperture Foundation. The bureaucratic obstacle course they faced during the five years only adds more color to what is a fascinating and warm collection of photographs of and interviews with the beleaguered inhabitants of Russia's poorest region.

Hornstra and Van Bruggen express surprise that Sochi was chosen for the Olympics at all, given its relatively mild winters, not to mention the ethnic strife that has plagued the area since the time of Tolstoy and Lermontov. Discussing Putin's triumphant acceptance speech, they contradict each of his optimistic remarks. Putin says proudly "On the seashore, you can enjoy a fine spring day, but up in the mountains, it is winter." They point out that "up in the mountains, there is not only snow, but an ongoing war with separatist rebels."

There is little included in the book about Sochi's expensive new stadiums or infrastructure, in fact, there is little about Sochi itself at all. The two spend time chatting to Sochi residents, who compare the arrival of the Games to the arrival of an enormous spaceship — it is so alien to them. They talk to absolutely everyone and anyone, like a Moldovan on the train on the way to Sochi who offers them "cheap women," to which they laugh and reply that they have "cheaper women in Amsterdam."

They also spend some time in the Sochi sanatoria, "Lenin's palaces for the proletariat," which are rapidly being replaced by hotels. They check in to the dilapidated Metallurg sanatorium and we meet Dima, a rather unimpressed child sitting in a bath full of sulfurous water — the cure prescribed by the doctor for his burned legs — injuries sustained at a wild family barbeque. 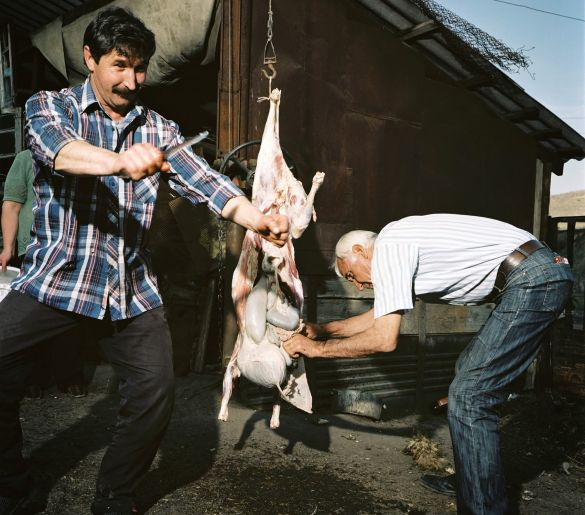 The Sochi Project shows the rough daily life outside the Olympic Village.

There are also photos of Abkhazia, a breakaway region near Sochi, which might have expected to benefit handsomely from the nearby Games. Alas, the two men find empty villages, torn apart by war, and a general sense of lethargy. Refugees have fled, mostly to Georgia, but we meet some interesting characters nonetheless. We get a glimpse inside Abkhazia's only prison and meet Vladislav Demyanov, a 63-year-old former convict, covered in tattoos, who is being treated for tuberculosis. He hopes to be discharged soon and dreams of eloping with a young girl, ideally about 17 years old.

Vyacheslav Chirikba, the Abkhazian Minister of Foreign Affairs, is also in a rather unenviable position, as only three major countries recognize Abkhazia: His task is to convince the rest of the world that Abkhazia exists and deserves recognition.

Venturing into Chechnya, there are more bizarre daily realities of life, as we learn about two 13-year-old Cossack twins who recited a poem in Chechen for Chechen leader Ramzan Kadyrov. Kadyrov was so pleased, they were immediately handed the keys to a luxury apartment in Grozny, the capital, nicknamed "the Dubai of the Caucasus." Their father, beaming with pride, mentions that his favorite activity on the weekends is heading into the mountains with Chechen special forces to "hunt down separatists."

Ethnic tensions, violence and 'disappearances' are everyday occurrences in the region. A poster on a noticeboard in a school in Dagestan gives precise weapon-handling instructions. Trust in the authorities, especially in the police, is extremely low. But life isn't easy for some of the police either, with harrowing stories of fathers finding their decapitated policemen sons on the side of the road. There are photos of the school at Beslan, survivors and also a child's bloody T-shirt — part of the memorial in the building.

As if to emphasize that all this is a million miles away and yet just over the mountains from the glittering new Sochi, these tragic photos are juxtaposed with the occasional photo of construction of a new stadium or a ski lift. In case we start to think that life is too easy in this sporting paradise, we are given a tour of Ivan's residence. Ivan is a construction worker who was fired after he complained that his bosses were withholding his wages and for the last few weeks has slept in a cowshed. He is trying to get enough money together for a bus ticket back to Azov, his hometown.

The overwhelming feeling one gets from the report is one of warmth in the face of destruction and violence. Despite telling tragic stories, the two Dutchmen are met with hospitality and copious amounts of chacha, the local alcohol, wherever they go. Daily life is a test of endurance, but the inhabitants seem more real, with deep-rooted traditions, in comparison to the superficial polish of Sochi.

Through their patchwork of encounters with individual locals, Hornstra and van Bruggen offer an intriguing glimpse into the lives of a collection of people of very different backgrounds. If you need a comprehensive, personal look into this complex and war-torn region or if you just want to know what is really going on outside the Olympic Villages, this book is for you.

"The Sochi Project: An Atlas of War and Tourism in the Caucasus" by Rob Hornstra and Arnold Van Bruggen is available from The Aperture Foundation for a list price of $80.00. ISBN: 978-1-59711-244-4. Their work can be viewed online at sochiproject.org.

The Russian private-security firm is considered close to Russian President Vladimir Putin, and has been accused of committing abuses.
‘FREE AND FAIR’

Boris Vishnevsky made headlines after he claimed that two other candidates had changed their names and appearance to match his.