SERTYAKINO, Moscow Region — Three well-groomed mongrels follow Igor Ayrapetyan, 41, around his home in the Moscow region, wagging their tails and jumping to lick his face.

A fourth dog sleeps on a sofa, its head on a pillow. Stuffed toys lie scattered across the floor and piled on another sofa, while out the window two more canines can be seen frolicking in the yard, chasing one another.

"Dogs have never bitten me — they sense when someone means them no harm," Ayrapetyan said, picking up one of the dogs in his arms and kissing it on the nose.

Ayrapetyan, a long-time dog owner, brought 11 stray dogs from Sochi in the back of his BMW SUV in January, after reading a Facebook post that said local authorities had hired a company to shoot street dogs and cats ahead of the Winter Olympics, which open Friday. A friend traveled with him so that each of them could take turns driving while the other napped.

Ayrapetyan was planning to leave to pick up another group of stray dogs from Sochi before the start of the Olympics but was delayed because several roads in the Krasnodar region, where Sochi is located, were closed in early February due to the Olympic torch relay. He still plans to make the trip after the start of the Games.

Officials from at least two Sochi districts announced tenders early last year for the capture and "disposal" of stray dogs and cats in their areas between 2013 and 2015. Dozens of local animal advocates rallied in Sochi in April against dog shooting, collecting about 1,500 signatures under a demand for authorities to build a dog shelter.

The authorities later said the tenders were cancelled due to a lack of bids, but local residents started finding corpses of stray dogs in Sochi late last year, local media reports said.

When Ayrapetyan arrived in the Moscow region with the Sochi dogs, he found volunteers to take eight of them and to look for new owners. A dog handler acquaintance took two of the remaining three canines for two months of training.

The one Sochi dog staying with Ayrapetyan — a short black-and-white female named Niki — was sleeping on a sofa on a recent visit to Ayrapetyan's home in the village of Sertyakino, located about 25 kilometers south of the Moscow Ring Road.

"Niki wants to make friends with everybody," Ayrapetyan said in a reference to his other five dogs.

In recent weeks, international media that have converged on Sochi have reported on the story, drawing renewed and broader outrage over the practice, which is meant to decrease or eliminate the many strays present in the Sochi area. While it remains unclear how many animals have been killed, numerous stray dogs and cats remain on the streets — journalists in recent days have snapped photos of them and described their presence around Sochi hotels and Olympic facilities.

Late Wednesday, Mark Adams, a spokesman for the International Olympic Committee, responded to the uproar over reports of strays being killed, saying that only sick or dying dogs were being euthanized, while healthy ones were being "taken into custody" so they could not disrupt the games, the Associated Press reported. It was unclear where the healthy dogs were being taken and later held. 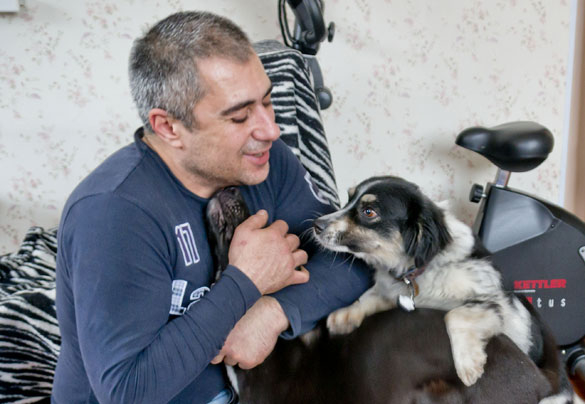 Ayrapetyan bonding with Niki, a dog he rescued from the streets of Sochi.

In late January, Sochi resident Yulia Krasova posted a video online that she recorded on her cell phone of a stray dog dying in fits, with froth coming out of its mouth, over a period of about 90 minutes.

Krasova, who posted the video on the Vkontakte social networking site, said she phoned a local veterinarian, who told her that he had received four similar calls that day and was "100 percent" sure the dog had been poisoned.

Media reports have identified the company hired by the Sochi administration to kill stray dogs as Sluzhba Basya, based in the nearby city of Rostov-on-Don, and said the company was using a drug containing Adelin, a muscle relaxant, to make dogs suffocate to death.

Alexei Sorokin, general director of Sluzhba Basya, admitted to The Moscow Times that his company was shooting stray dogs on the orders of the Sochi administration and using Adelin, but said the drug was "devised for humane euthanasia."

"The drug works this way: It paralyzes brain neurons first of all and then all the other organs, so that dogs cannot feel anything," Sorokin said by phone, adding that the use of Adelin for shooting dogs was "in line with the law."

Sorokin refused to say how many stray dogs his company had shot or had been ordered to shoot under the terms of its contract, or how much the company had been paid by the Sochi administration for its services.

Mikael Nersesyan, a spokesman for the Sochi administration, said by phone that he did not know whether a company had been shooting stray dogs on the order of local authorities, asking to call back so that he could find out. When reached a few days later, Nersesyan said he had no time to find out whether such a practice was being done.

But he expressed confidence that if dogs were being caught, it was being done "in a civilized manner, like in other European countries."

"I strongly doubt that any kind of poison is used," he said.

Before the early 2013 city tenders for extermination of stray animals were announced, "stray dogs were somehow caught but how it was done, I do not know," Nersesyan said.

"The city has been put in almost ideal order: stray dogs do not run in the hundreds on Sochi streets," he said.

Nersesyan denied that clearing Sochi streets of stray dogs was linked to the Olympics but said it was "an issue of sanitary safety" for Sochi residents.

"If hundreds or even thousands of them appear, the problem must be solved," he said. "And do not hold the authorities responsible for everything if you take a dog and then throw it away," he said, referring to irresponsible dog owners. 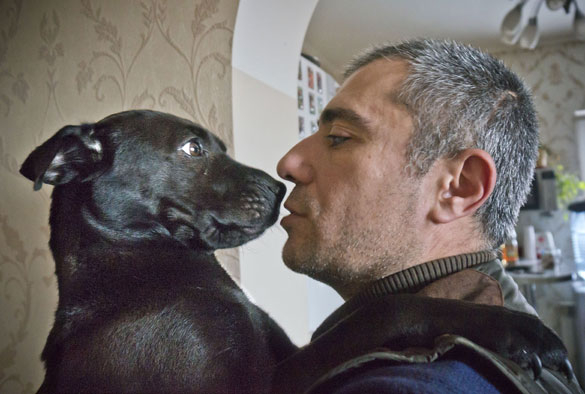 Ayrapetyan, who drove to Sochi from the Moscow region to collect 11 stray dogs, kissing one of his canines.

According to local animal advocates, part of the problem is the lack of dog shelters in Sochi.

Nersesyan said that local authorities recently provided volunteers with a five-hectare land plot for a dog shelter in the village of Baranovka, just north of Sochi, and laid utility connections and a road there. Apparently worried by the growing number of media reports about dog shooting in Sochi ahead of the Olympics, the city administration issued a statement about the dog shelter on its website on Monday, featuring a photo of a stray winking into the camera.

But city authorities allotted the land plot to local charity Dobromir for construction of a dog pound only a few weeks ago, although volunteers had been pleading with officials for assistance on the issue since 2007, Dobromir director Anna Vechkayeva said by phone from Sochi.

"When I first came to the administration, being naive, I asked what could be done about the problem [of stray dogs] and was told: It is you who have a problem. We have none — we deal with it the way we do," Vechkayeva said of the extermination of strays.

Vechkayeva became worried about the fate of stray dogs in Sochi when Russia was picked to host the Olympics in 2007 because she had read that authorities in other countries used to get rid of street animals before hosting the Games.

"The shooting of strays with poison happens early in the morning so that no one can see it," Vechkayeva said of the current dog hunters in Sochi.

Dog hunters also throw poison around that a dog can eat, locals say, and Vechkayeva, a dog owner, worries for her pets. "No one is safe from poison because a dog can eat anything," she said.

The land plot for the animal shelter was allotted after the issue of stray dogs "became the subject of public discussion," Sochi administration spokesman Nersesyan said, in an apparent reference to the April rally in Sochi held in support of construction of a shelter.

Volunteers are currently creating kennels and enclosures for the temporary holding of dogs on the land, hopefully until they find homes, Vechkayeva said. Donations to cover the costs of dogs' needs are being made by ordinary people and organizations. There were more than 40 dogs on the premises as of early February.

Several other local dog advocates, having heard about the extermination efforts, started a group helping stray animals in Sochi on Vkontakte in order to take them off the streets and into homes. As of Wednesday afternoon, the group had almost 4,100 members.

Dog rescuers bait strays with food and put them on a leash or sometimes have to carry a dog in their arms when it refuses to walk on a leash, Vkontakte group manager Anna said by phone.

Anna, who apart from managing the Vkontakte group rescues dogs from the Sochi streets herself, asked not to be identified by her last name because she works for the government.

Ayrapetyan, from the Moscow region, is the only one who has come for strays from another city. Most of the dogs find new homes in Sochi or elsewhere in the Krasnodar region.

"I have dreamt since childhood of becoming a veterinarian," Ayrapetyan said. "Instead I became an economist and a lawyer, with an MBA. But this did not bring me joy, and I got back to doing almost what I wanted," he said in a reference to his dog rescue activism.

Once a wealthy businessman who "did not count the money" he had, Ayrapetyan lost his business several years ago and moved to a village. He now lives on a salary of 9,000 rubles ($260) per month working as chairman of a partnership of home owners where he lives, but he does not regret losing his wealthy life.

"I had tried to fill the vacuum in my soul with material things like new cars and traveling but soon got bored," Ayrapetyan said. "Now my life has become real."