The easiest alternative that people had to going to exotic resorts during the Soviet period was traveling south of the country to see the palm-lined streets of Sochi. National celebrities were not an exception. Many actors and singers eagerly went to the southern city to get a tan and perform for adoring audiences there.

Crossing the border has become easier with time, though celebrities continue to pay tribute to Sochi by regularly coming here either for concert tours, festivals or just to relax. Luckily for them and the rest of us, Sochi's infrastructure is catching up with its guests' high expectations. Now you can shop in designer boutiques, relax in the spas of five-star hotels, and hop from one lively party to another. Sochi has what it takes to make you feel like an ace yourself. 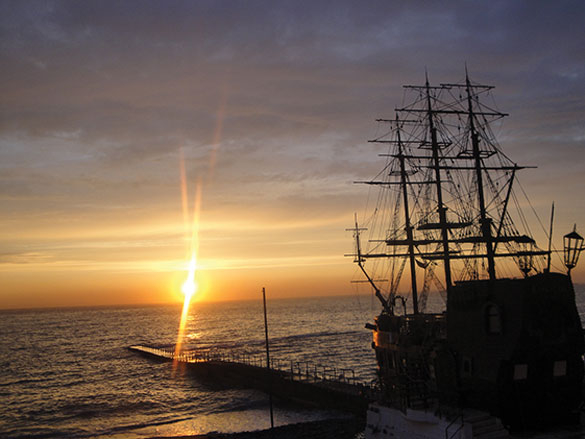 No hotel in Sochi has had more photographers and camera operators camping outside than the legendary Zhemchuzhina. The rough, block-like building may not immediately evoke a sense of awe, but it is nonetheless a place where you will find more celebrities per square meter than anywhere else in the city.

This figure is fairly stable throughout the year, but increases significantly in June when Sochi hosts the country's largest film festival, Kinotavr. Fashionable actors, their spouses and Russia's society queens crowd the lobby and wait to take their turn at the red carpet — a perfect opportunity for passersby to take pictures or ask for autographs. 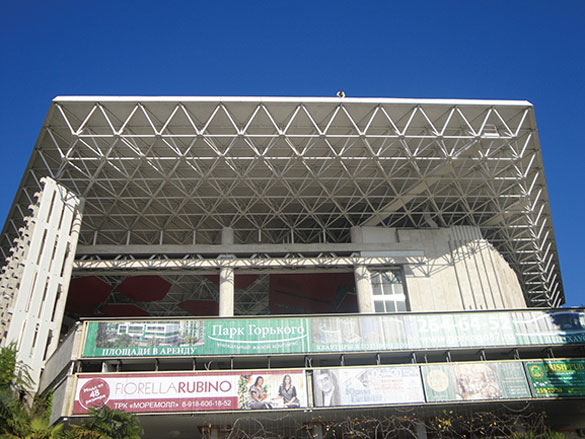 The celebrities who are unlucky enough to be staying in Sochi just for one night tend to make only this route — from the Grand Hotel Zhemchuzhina to the Festivalny Concert Hall and back. Much like the hotel, the concert hall is a modernistic and unappealing Soviet structure, though strangely, these qualities have become endearing over time. Festivalny's administration had once tried to knock it down to make way for three more profitable hotel towers, but the hall survived the proposal.

Festivalny was built in 1979 and is wildly inventive. It is possible to see not only the stage from each of its 2,500 seats but also the sea and the sky. This openness to the sea, though scenic, can also be a drawback. The sound of the waves overpowers some of the quieter artists who perform there, which might be why the venue is so popular with the louder choir ensembles and symphonic orchestras. The braver Russian pop and rock performers also like to come here, as was the case with the military-inspired band Lyube. That particular concert even got a clap from President Vladimir Putin who was in the audience.

Unlike the president, some skip buying concert tickets and listen to the music from the promenade below — a clear drawback for the venue's managers. Fans, meanwhile, can get yet another dose of their favorite artists for free by waiting outside the hall's exits. Festivalny is built in such a way that performers have to shuffle past the viewers after the shows to get to their cars. For some people who have come to Sochi from the smaller Russian towns, this is not only the first view that they'll get of their famous idols, but also a remarkably close one.

Boutiques at the Seaport Terminal

Sochi's seaport terminal has been transformed into a mini mall full of designer boutiques several years ago and now shopping there provides one of the rare chances to see the building's dazzling interiors in person.

Sculptures from the "Brilliant Arm" Film 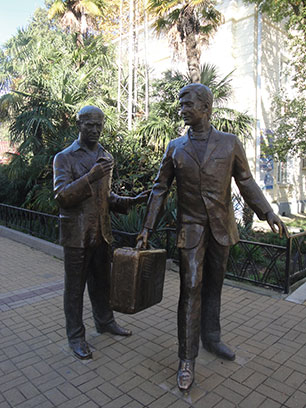 Ulitsa Voikova, left side of the seaport terminal

Sochi provided the setting for many films, but none better known than the Soviet "Brilliant Arm." To this day, there is hardly anyone in Russia who has not watched this 1969 classic. Most people have actually seen it so many times that they know all the lines by heart.

Sochi is featured in the beginning of the movie when the diligent economist Semyon Semyonovich Gorbunkov sets off on a cruise to Turkey from the resort's iconic seaport. During the trip, Gorbunkov befriends a polite young man, Gennady Kozodoyev, who is actually a contraband artist. In one short but pivotal moment, Gorbunkov is mistakenly identified as Kozodoyev and ends up getting contraband diamonds wrapped into his arm cast without his knowledge. The film then proceeds to show Kozodoyev's many humorous attempts to take the diamonds back.

Statues of Gorbunkov, his wife and two kids now stand facing the seaport as if once again preparing to send the father of the family off on his journey. A few meters away Kozodoyev gets last-minute, chuckle-worthy advice from his contraband buddy Lyolik. 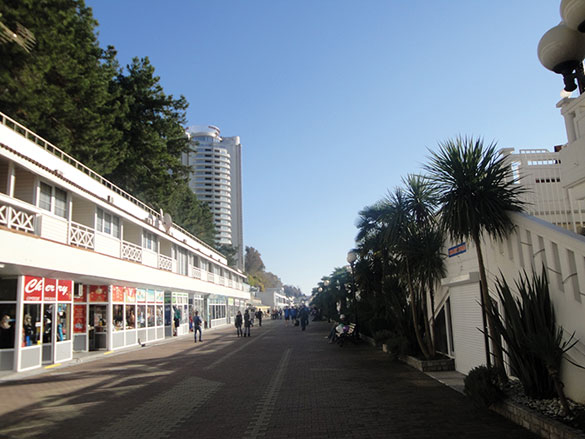 Night or day, the Sochi promenade is bustling with activity. And for good reason. It is a great place to kick off the day with a sunny breakfast by the water, shop for souvenirs during the day at one of the many kiosks along the route, or watch the sunset with a glass of wine.

This tourist-packed area of town is lined with restaurants and shops so you're bound to find something you like and need, whether you're taking a break from tanning on the adjacent beaches or just taking a stroll. Watch out specifically for street entertainers. They are a diverse bunch — from accordion-playing pensioners to tattooed jugglers — and a sight to behold on their own. 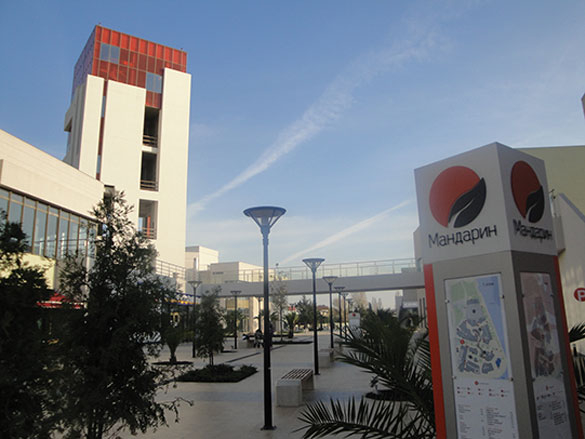 Designer boutiques and large multinational retailers are still not a common sight in Sochi, though some front-runners are already starting to arrive on the scene. The shopping district of the city lies roughly along Ulitsa Ostrovskogo and Navaginskaya Ulitsa, but there is also a cosy shopping area on Ulitsa Poyarko.

The shopping rows on Ulitsa Ostrovskogo combine several malls and include the brands Sarar, Milavitsa, Antonio Barbato, Gizia and Baldinini. The store Max Moda, located at the southern entry into the galleries, sells shoes and accessories by Chloe, Marc Jacobs, Givenchy, Armani and Ferre.

The Excelsior boutique on Ulitsa Poyarko was one of the first places to sell designer clothes in Sochi. It opened 10 years ago and showcases items from Gucci, Dolce and Gabbana, Yves Saint Laurent, Christian Dior and Brioni, among others.

Solnechny Plyazh
Noon to 8 p.m. from Sunday to Wednesday for restaurant reservation;
Club open 24 hours on Friday and Saturdays
+7 (862) 227-0500
oblakasochi.ru

Celebrity sightseeing opportunities in Sochi are not confined to Zhemchuzhina. Parties tend to spill out beyond the hotel's executive suites to the many restaurants and bars along the scenic sea promenade. The most glamorous of these is the star-studded Oblaka, one of Sochi's trendiest dining and nightlife venues. It opened in summer 2013, just in time for the Winter Olympics, and is located on a platform that stretches meters out into the water, though even from the beach you can hear the loud music blaring in there.

Oblaka functions as a restaurant, where traditional Russian dishes are served with a French interpretation, or as a bar with a broad beverage menu. There is also a beach where guests can get massages and order cocktails. The restaurant transforms into a nightclub during the weekends. High quality DJ sets are the norm here, though the venue also regularly serves up celebrity music guests, both Russian and foreign.

The music coming out of the Bootlegger Whisky Bar is so tempting that even Alexander Pushkin's statue, which stands by the public library opposite, seems to want to come in. Here classic rock 'n' roll tunes mix with slower lounge melodies to instantly teleport guests from the Black Sea resort to the beginning of the 20th century in North America.

The tag line for the bar, part of the Marins Park Hotel complex, is "Damn, it feels good to be a gangster" and after one evening in the bar's cosy interiors with its old photographs, seafood-filled menu and diverse drink options, it'll be no wonder if you end up nodding — and humming — along. 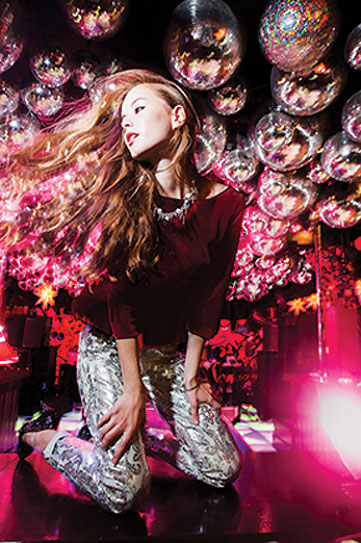 Owned by the same company and located conveniently next door to each other, Free Bar and Balalaika Bar & Karaoke compel you to make a last minute choice on how wild your night in Sochi will be. Free Bar is the more extreme of the two. This classic dancing venue works only on the weekends and has a strict dress code, though that applies more to the visitors' mindset rather than their wardrobe.

The Balalaika Bar & Karaoke offers 10,000 Russian and foreign songs to choose from, but even if you are not in the mood to sing yourself, there are two girls on staff who will make sure that the singing frivolity does not stop. You are, however, encouraged to reconsider the latter passive option. The karaoke has a back vocalist and professional sound producer so that there is at least the reassuring hope that you will sound better than you might actually be.

Fair warning: Both venues are targeted at the local youth so the music might not always be recognizable or the partygoers much inclined to small talk. 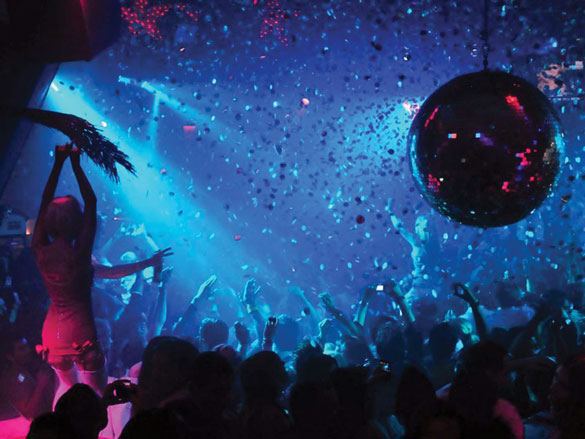 Malibu is the biggest nightclub in Sochi and still exudes the risky, one-night-to-live atmosphere of its 1990s origins. It is hard to walk by on the promenade at night without noticing it.

Malibu may not be among the city's more fashionable clubs, but it certainly delivers on its fun promise. The two-level club can fit 1,000 visitors and has several cocktail bars and VIP lounges. All of the open-roof settings are done in the California beach style. Well-known DJs play sets here on a regular basis, and the club sometimes also hosts concerts by famous artists.

Bar London is one of the city's best known dining and nightlife venues. You'll know you've come to the right spot as soon as you see posters of Paul McCartney and Mick Jagger at the door. Beyond that, some more nostalgia awaits — London's red telephone booths, vintage photographs of London Bridge and other symbols of the British capital.

The bar was built at the former location of Hotel London, a boisterous bohemian paradise at the turn of the 20th century. You won't meet Konstantin Balmont or Sergei Rachmaninoff there anymore, but it's quite realistic to come across some budding artists who also enjoy the bar's stylish interiors and casual atmosphere. The bar serves up European and Japanese dishes and functions as a club on Fridays and Saturdays, though you're sure to hear great music there any day of the week.

One of Sochi's newest and best equipped bars, Cocos opened in October 2013 and is already getting regular visitors. Live music is played from Thursday through Sunday, while a DJ spins lounge and funk music during the weekdays.

There is a separate alcove for karaoke as well as three isolated VIP rooms. You don't need to reserve the VIP rooms in advance, but there is a deposit of 15,000 rubles that you can then set to zero through your food and alcohol orders. Continental, Thai and Japanese cuisine is served at the bar.