Former Bolshoi Ballet dancer Pavel Dmitrichenko was found guilty on Tuesday and sentenced to six years in a high-security prison for last January's acid attack on artistic director Sergei Filin, marking the end of a saga that repeatedly dragged the theater's reputation through the mud.

The Meshchansky District Court found Dmitrichenko guilty of masterminding the high-profile attack, which not only left Filin nearly blind but exposed bitter infighting at the prestigious theater and caused one of the worst crises in its nearly 250-year history. In the year that has passed since the attack,  star dancer Nikolai Tsiskaridze has resigned, director Anatoly Iksanov was replaced by Vladimir Urin, and several other staff members have been removed.

On Tuesday, the court found all three defendants guilty of colluding to inflict grave bodily injuries on Filin, including Dmitrichenko and his two accomplices: unemployed Moscow region residents Yury Zarutsky and Andrei Lipatov. Zarutsky was sentenced to 10 years in a maximum-security prison for carrying out the attack, and Lipatov got four years for driving Zarutsky to the scene.

Yelena Maximova, the sole judge who presided over the trial, did not formally identify the motives of the defendants but said their guilt “had been proven in full.”

Maximova cited Filin’s testimony and videos from street cameras as some of the most unquestionable evidence in the case.

Filin earlier testified that Dmitrichenko had a grudge against him over his work policies, while Dmitrichenko said Zarutsky and Lipatov had received 50,000 and 10,000 rubles ($1,500 and $300), respectively, from him for taking part in the crime. 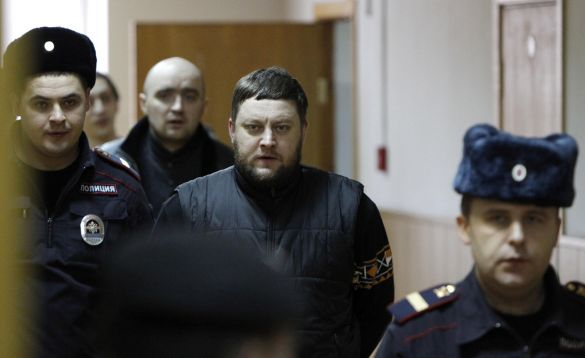 Yury Zarutsky being escorted into the courtroom on Tuesday. He was found guilty in the acid attack on Filin.

All three defendants played down their guilt in court.

Dmitrichenko testified that he had ordered Zarutsky only to beat Filin, not to splash acid on him, while Lipatov said he knew nothing about the planned crime when he drove Zarutsky to the crime scene. Zarutsky, who admitted that he threw acid at Filin, said Dmitrichenko was unaware of his plan to use acid. He said he thought the sulfuric acid would cause only minor injuries because he had tried it on his own hand and it caused only redness of the skin and a light burning sensation.

Filin's testimony about how he was left writhing in pain in the snow was apparently more convincing for the court.

Prosecutors had asked the judge to sentence Dmitrichenko to nine years in prison, Zarutsky to 10 and Lipatov to six.

The three received lighter sentences than envisaged by law because the judge took into account mitigating circumstances for each of the defendants while deciding on the verdict, she said.

Among them were Dmitrichenko’s eagerness to pay a financial compensation to Filin, his participation in charity, good references from his colleagues, and his elderly parents' financial dependence on him. For Zarutsky, his two-year-old daughter constituted a mitigating circumstance, and for Lipatov, the fact that he had no prior convictions helped in his favor, she said.

Shortly after learning of his prison term, Dmitrichenko was seen smiling in the courtroom.

Zarustky appeared to be irritated when he heard his sentence, while Lipatov seemed emotionless.

As police led the handcuffed defendants out of the room, one of several dozen reporters who attended the trial shouted, “Pavel, what do you think of the verdict?” Dmitrichenko simply hung his head and smiled sadly.

Relatives of the defendants, including Dmitrichenko’s parents, left without commenting to journalists.

Lawyers for the three defendants told journalists outside the court that they planned to appeal the sentences with the Moscow City Court within 10 days, as provided by law.

Dmitrichenko’s lawyer, Sergei Kadyrov, called the verdict “unjust” and “inconsistent with what really happened,” adding that Dmitrichenko could be charged only with ordering Filin’s beating.

Lipatov’s lawyer, Sergei Zhorin, said he would seek “a full acquittal” of his defendant.

“We are even displeased that the court reduced the prison term demanded by the prosecution by one-third, because it proves that our defendant is not guilty,” Zhorin said. 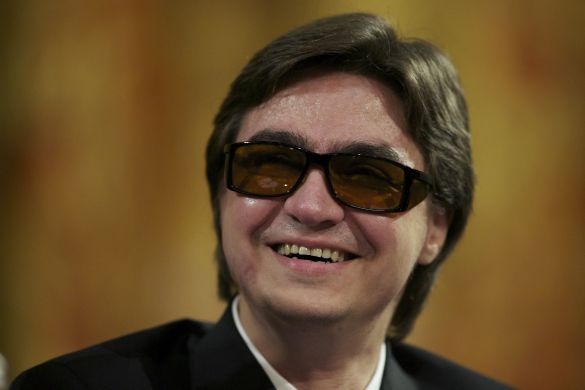 Zhorin said Lipatov’s only guilt was that he failed to report the crime when he learned about it afterwards. He should have been punished for that in line with the Criminal Code, Zhorin said.

Zhorin also disagreed that the defendants should pay compensation to Filin jointly, as the court ruled that their roles in the crime all differed.

Filin’s lawyer, Tatyana Stukalova, said her defendant’s civil lawsuit for compensation of moral and material damages had been satisfied completely.

As for the sentences handed down to the defendants, however, she said she could not comment on the matter before consulting Filin.

“We had not discussed  [prison] terms, he just wanted a punishment related to confinement and said he would not forgive anyone,” Stukalova said. Filin has undergone 23 eye surgeries in Germany, but they have only slightly restored his vision. He is currently preparing for more surgery there, Stukalova said.

“They ruined Pasha’s life forever, he will never be able to dance again — this is irrecoverable,” Tsiskaridze told Interfax.

Tsiskaridze tied Dmitrichenko’s sentence to his refusal to name Tsiskaridze as the mastermind of the attack after allegedly being coerced to do so by investigators.