Nadezhda Tolokonnikova, a member of the feminist punk rock group Pussy Riot, has announced she is going on hunger strike after the administration at her Mordovia prison threatened to kill her, prompting regional investigators to look into her allegations.

Tolokonnikova's husband, Pyotr Verzilov, said his wife wrote him a letter saying, "It's an extreme method, but I'm absolutely convinced that this is the only possible way out of this situation," Interfax reported.

Comparing the prison colony to a slave labor camp, the punk rock activist wrote of 16-hour work days that stretched from 7:30 a.m. until after midnight. Prison laws state that wardens must allow inmates to receive eight hours of sleep, but Tolokonnikova said it was impossible to get more than four hours of rest a day.

In an open letter to the Investigative Committee and the Kremlin's human rights ombudsman republished by Lenta.ru, she described an elaborate system of informal punishment in the prison that saw guards refuse to let inmates use the toilet, prohibit them from eating their own food products and keep them from entering their barracks until lockdown.

Any complaints about prison conditions were met with “collective punishment,” she said.

“You complain that there is no hot water, and they shut it off completely,” she wrote.

After she filed a complaint about the conditions through her lawyer a month ago, the prison administration began a campaign to make her stay there unbearable, Tolokonnikova claimed. 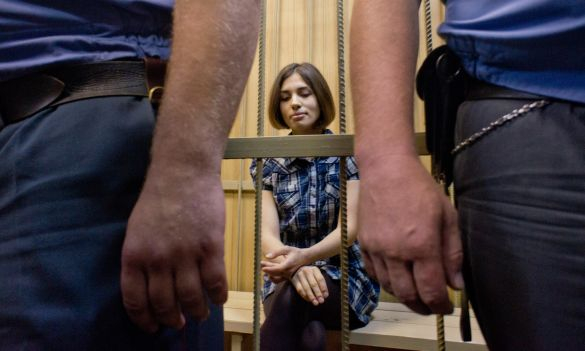 Nadezhda Tolokonnikova sitting in a holding cell as guards stand nearby at an earlier hearing into her case.

“Search after search, reports on all my acquaintances, the removal of warm clothing and the threat of taking away warm shoes as well,” Tolokonnikova wrote.

She also complained of violence against the inmates that is “approved by the administration,” saying that one woman was beaten to death and the incident disguised as a heart attack by prison doctors.

“They beat others. For not being able to keep up. In the kidneys, in the face. The inmates themselves carry out the beatings, but not one is done without the go-ahead and knowledge of the administration,” she wrote.

The prison's press service responded to Tolokonnikova's accusations Monday, saying that she, her husband and her lawyer tried to blackmail Kupriyanov because he would not grant her “privileges.”  They said they would tell news outlets that he had threatened her with violence unless the prison administration let her switch jobs at the prison and work in an art studio, the press service said.

A member of the Public Chamber plans to visit the prison Wednesday to discuss the threats, the organization's press service told RIA Novosti. Regional investigators said they would be opening a check into her statements that could take up to 30 days, Interfax reported.

Tolokonnikova, who was sentenced to two years in prison for performing a 40-second anti-Putin song at Christ the Savior Cathedral in February 2012, is scheduled to be released this March.

She was denied parole in April because of two behavioral reprimands from the prison.

Fellow Pussy Riot member Maria Alyokhina went on hunger strike for 11 days in late May to protest security conditions at her colony. Her lawyer, Irina Khrunova, said in early June that the strike had been successful and a number of Alyokhina's demands had been met, including the reversal of excessive security measures in the prison.