A jailed member of female punk group Pussy Riot lost a court battle to be released but remained unrepentant over last year's protest against President Vladimir Putin in a Moscow cathedral.

Nadezhda Tolokonnikova watched from behind the black metal bars of a courtroom cage as a regional court on Friday upheld an earlier decision not grant her parole.

The ruling by the Supreme Court of the Mordovia region was the second blow in three days for Pussy Riot. Maria Alyokhina, the other band member serving a two-year sentence, had a similar attempt quashed in a court in Perm on Wednesday. 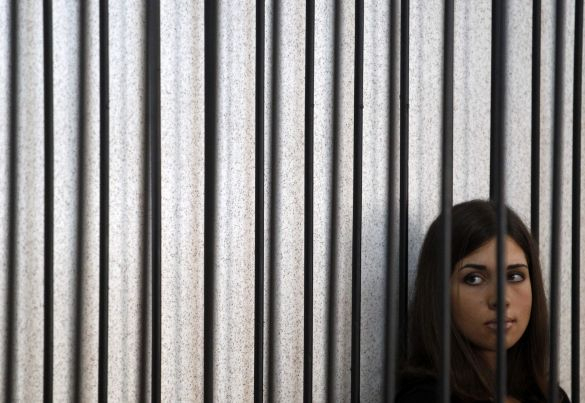 Nadezhda Tolokonnikova looking out from a holding cell during a hearing Friday in Mordovia’s Supreme Court.

"I will appeal my sentence to the last, including in the Supreme Court of the Russian Federation," Tolokonnikova said during Friday's hearing in the city of Saransk, about 500 kilometers southeast of Moscow.

Tolokonnikova, who has a five-year-old daughter, refused to plead guilty even though it might have won her favor in court.

"I do not admit guilt and will not plead guilty. I have principles upon which I will stand," she said.

Tolokonnikova, 23, and Alyokhina, 25, are being held in remote prison colonies following their conviction last August for hooliganism motivated by religious hatred over their protest in Moscow's Christ the Savior Cathedral in February 2012.

Having donned brightly colored balaclavas, the women danced on the altar for about 40 seconds before they were apprehended by the church's security guards.

An edited video of their "punk prayer" was then posted on the Internet, with the feminist punk protest group's song, "Mother of God, Drive Putin Out" as its soundtrack, causing a public outcry. 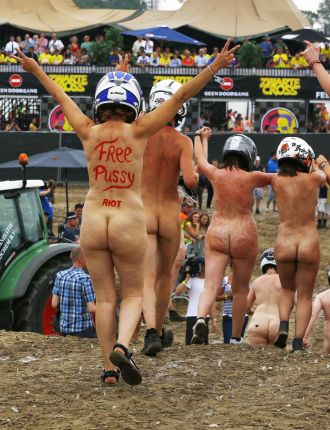 Pussy Riot supporters participating in the Naked Run in the Netherlands.

Tolokonnikova's initial parole case was rejected in April after a judge found no evidence to suggest she had improved her behavior after receiving two prison reprimands.

Tolokonnikova and Alyokhina are due for release next March. A third Pussy Riot member, Yekaterina Samutsevich, was freed last October when a judge suspended her sentence on appeal.

Head of the Moscow Helsinki Group Lyudmila Alexeyeva said she is disappointed with the decision, Interfax reported. "Unfortunately, this was to be expected, but I do not support this decision," she said, adding that Tolokonnikova and Alyokhina should not have been put behind bars in the first place.

Material from The Moscow Times and RIA Novosti is included in this report.