Russia's most prominent opposition leader and anti-graft blogger, Alexei Navalny, has filed an appeal against his conviction and sentencing to five years in prison for embezzling funds from a state timber company.

Navalny, a stringent critic of President Vladimir Putin, denies any wrongdoing and says his conviction in the remote Russian city of Kirov is a Kremlin-driven attempt to stop his opposition activism and part of a wider crackdown on dissent.

"We have sent the appeal," Navalny wrote on his Twitter account Friday, alongside a photo of a receipt from the Russian Post charging less than $3 to deliver the papers to the Kirov regional court, which has 30 days for a ruling from the moment it receives the papers.

Following his sentencing on July 18, Navalny was immediately taken under guard in the court room in a show of force but then unexpectedly released from arrest the next day pending appeal.

The appeal also covers a second convict in the case, Pyotr Ofitserov, who was sentenced to four years in prison as Navalny's accomplice in working out a scheme to steal some $500,000 from a state timber company. 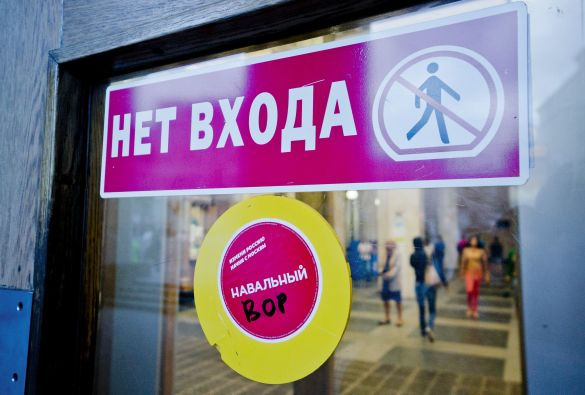 A sticker from the nearby campaign offices defaced with the word “thief.”

Since his temporary release, Navalny, the face of the largest wave of street protests against Putin's 13-year rule that swept through Moscow and other big cities in Russia in 2011-12, has been campaigning for Moscow mayor ahead of the Sept. 8 elections.

Opinion polls show him trailing far behind the favorite in the race, Sergei Sobyanin, a close Putin ally who is seeking a fresh term in the influential job.

Allies of the 37-year-old Navalny believe Sobyanin might have played a role in the unexpected release of their candidate to give credibility to the election.

They also hope Navalny would be more likely to avoid jail if he won the race, though his appeal is mainly limited to the urban middle-class and Internet-savvy youth.

"This indeed is a serious concern of many of our supporters. They say they could vote for Alexei, but what for if he is subsequently jailed. We tell them that if Alexei wins this election, the authorities will not dare to put him behind bars," Leonid Volkov, Navalny campaign head, said Friday.

The Kremlin denies exercising influence over the Russian judiciary or using it to persecute its political opponents. It also denies clamping down on dissent since Putin, a former KGB spy, came back for a third Kremlin term in mid-2012.

Muscovite Rodion Logvin decided to flee to the South Caucasus nation of Georgia to avoid being conscripted into the Russian army a few hours after mobilization...
deadly attack

The death toll has risen to 15 people, including 11 children, after a man opened fire Monday at his former school in central Russia, authorities said. The...
escalating rhetoric

Russia Tells U.S. to ‘Cool Down’ Over Putin’s Nuclear Warning

Russia’s deputy foreign minister said on Monday that the United States should "cool down" after Washington warned Moscow against nuclear weapons...