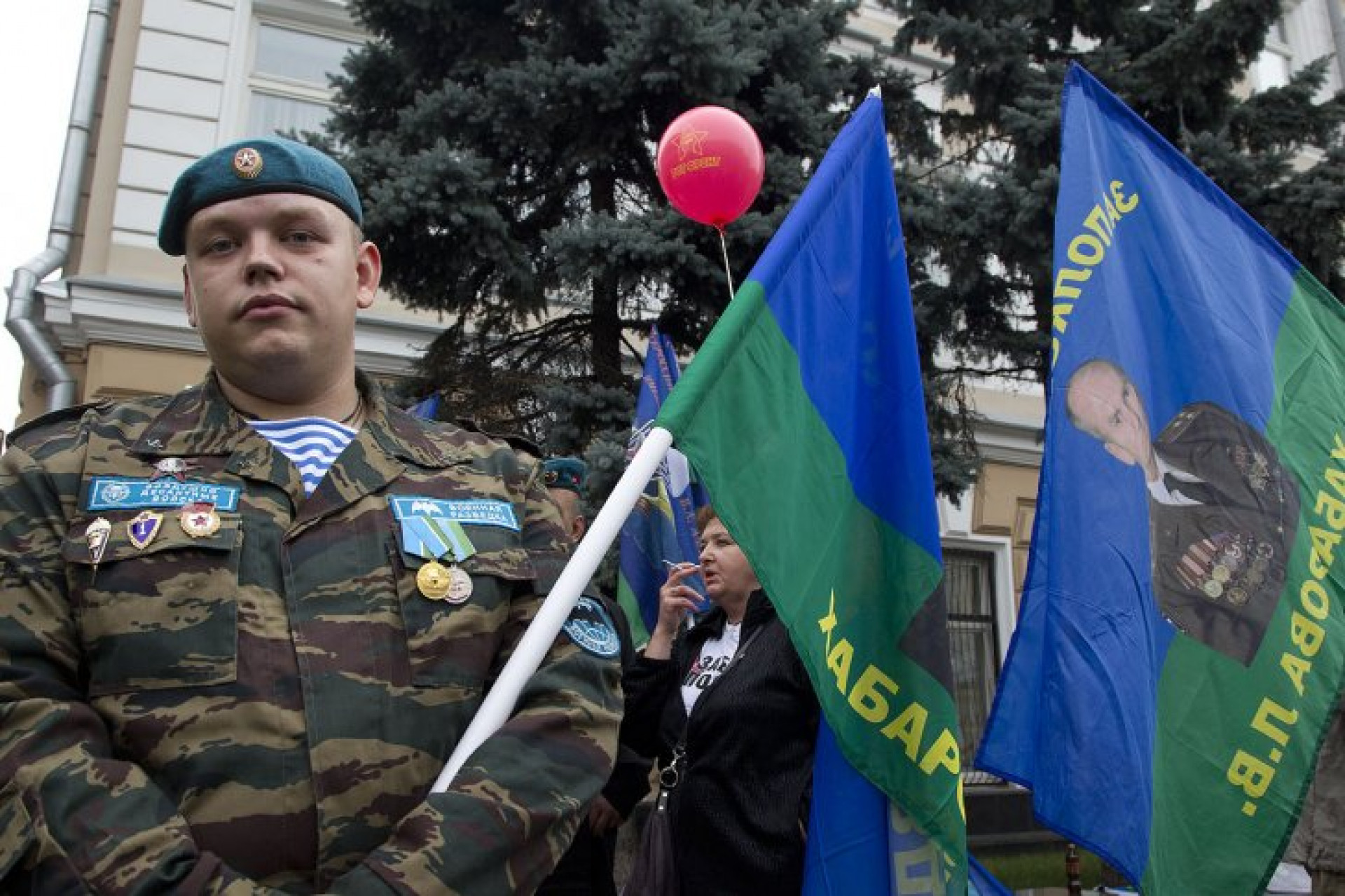 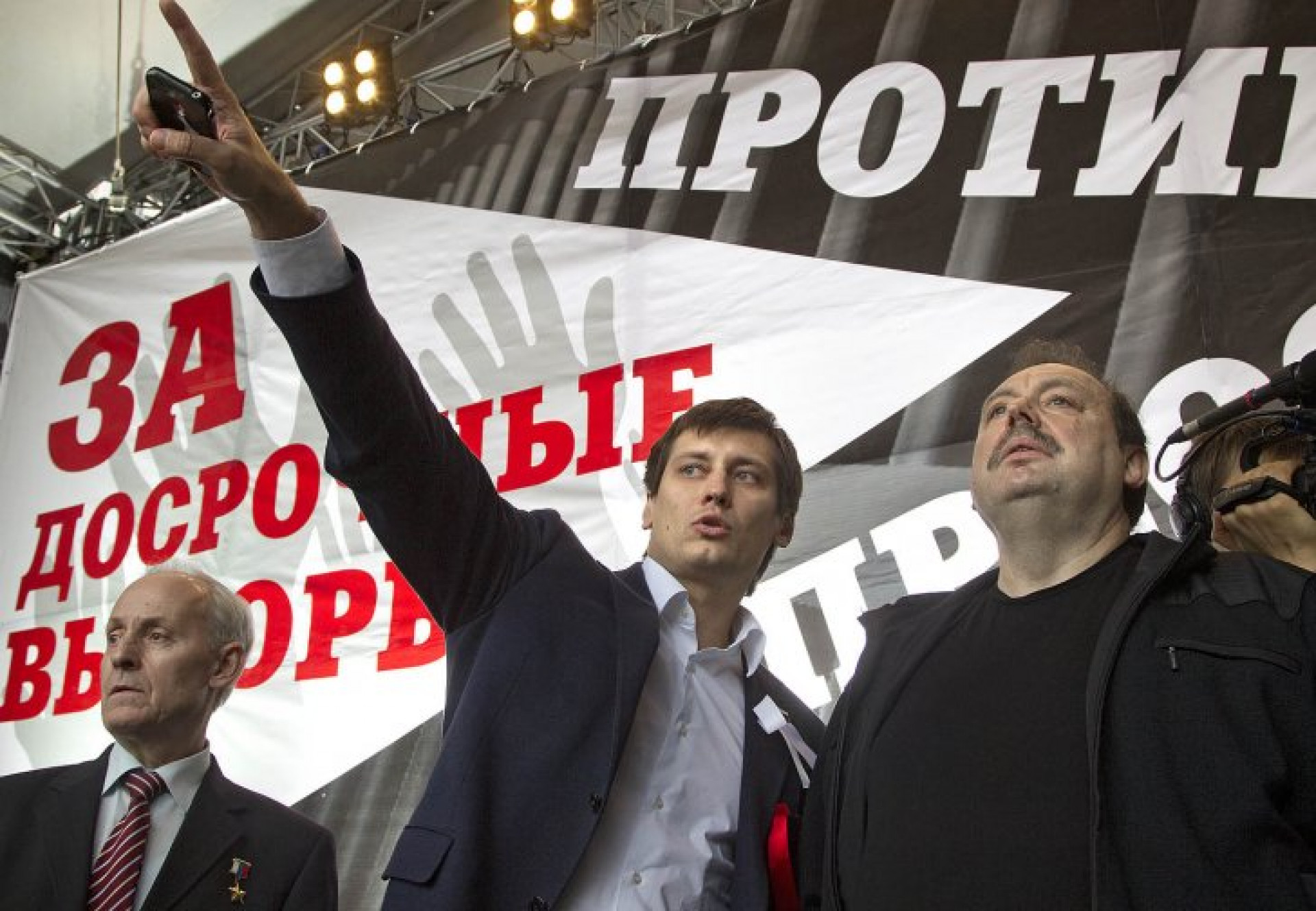 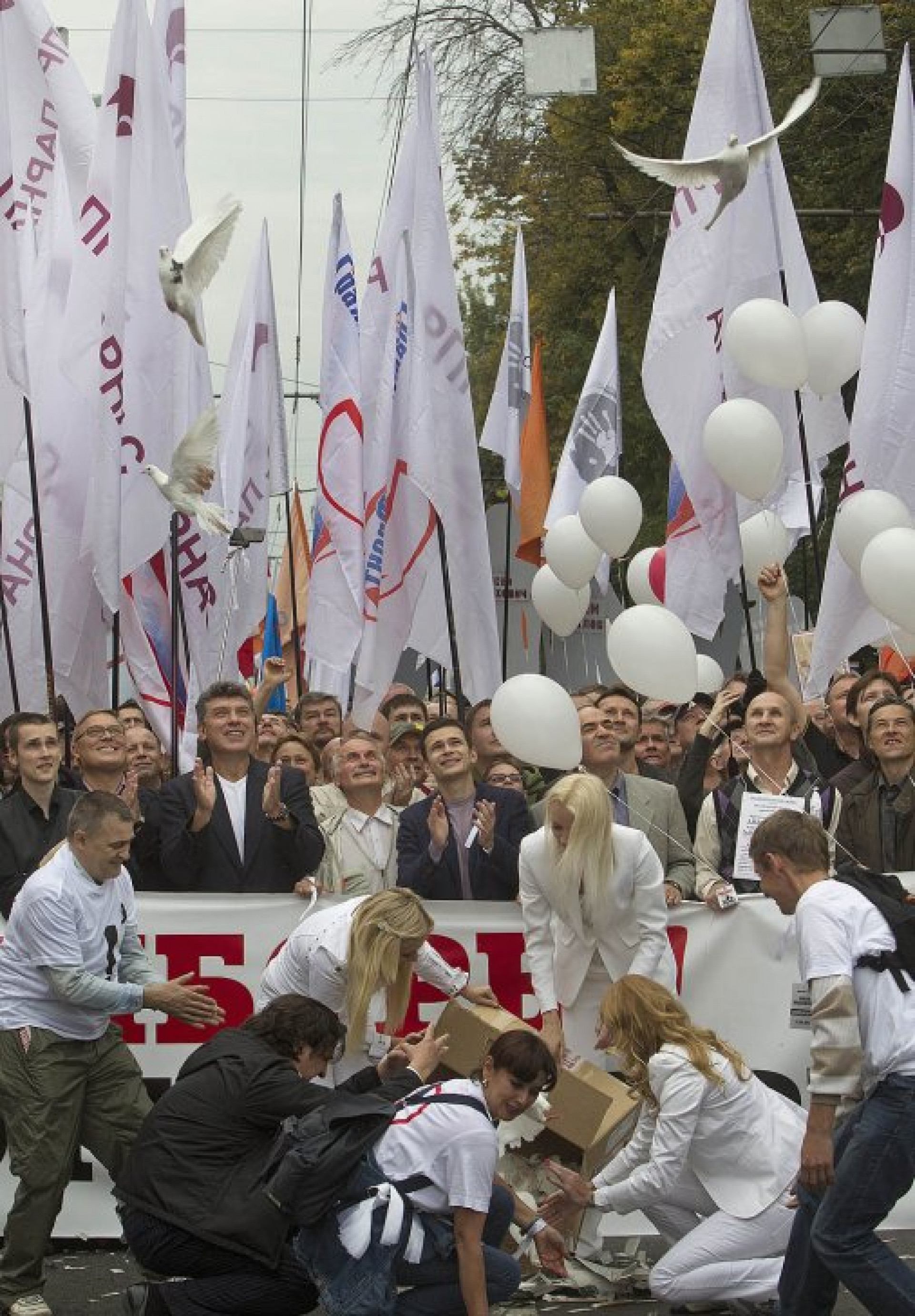 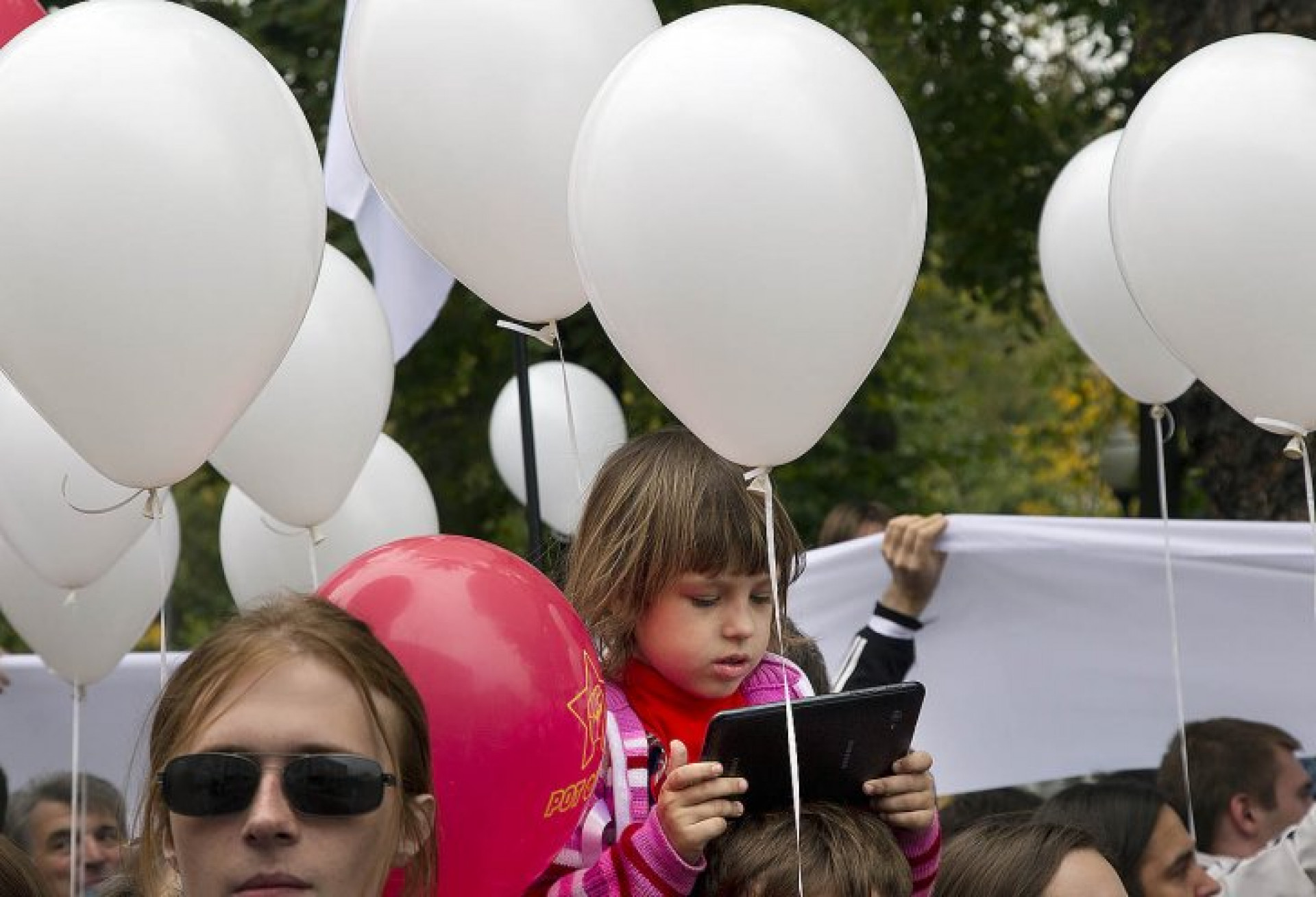 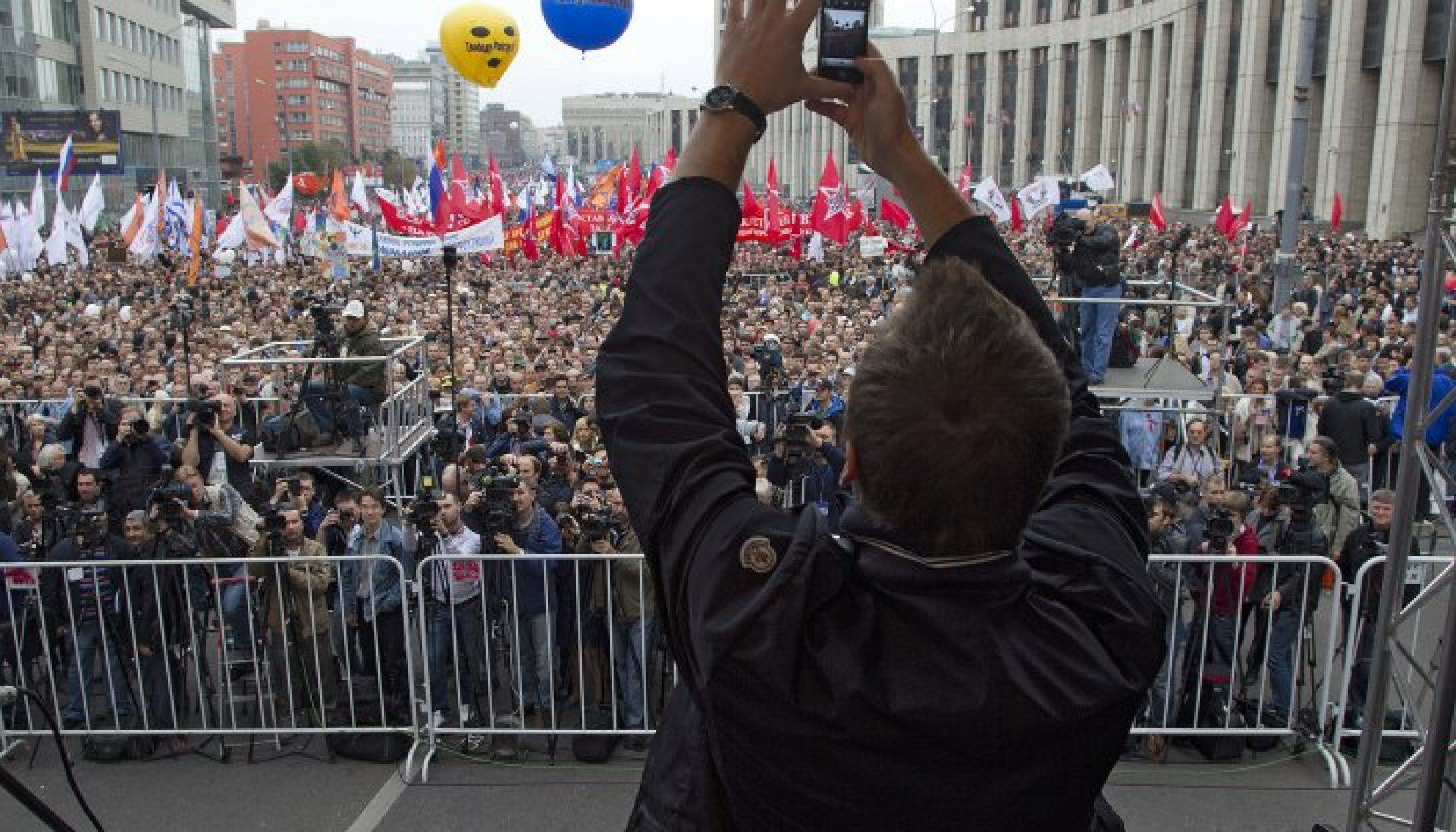 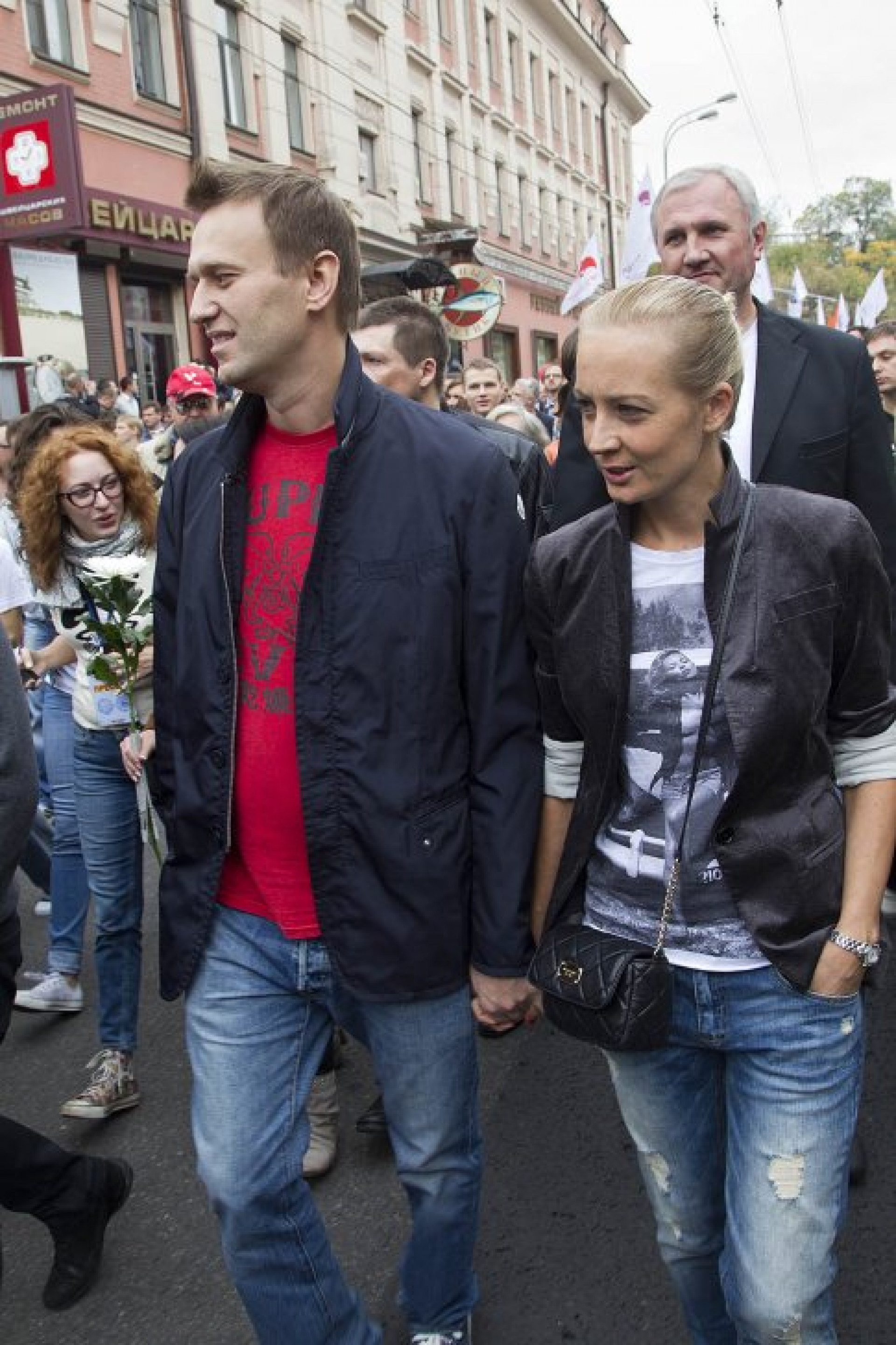 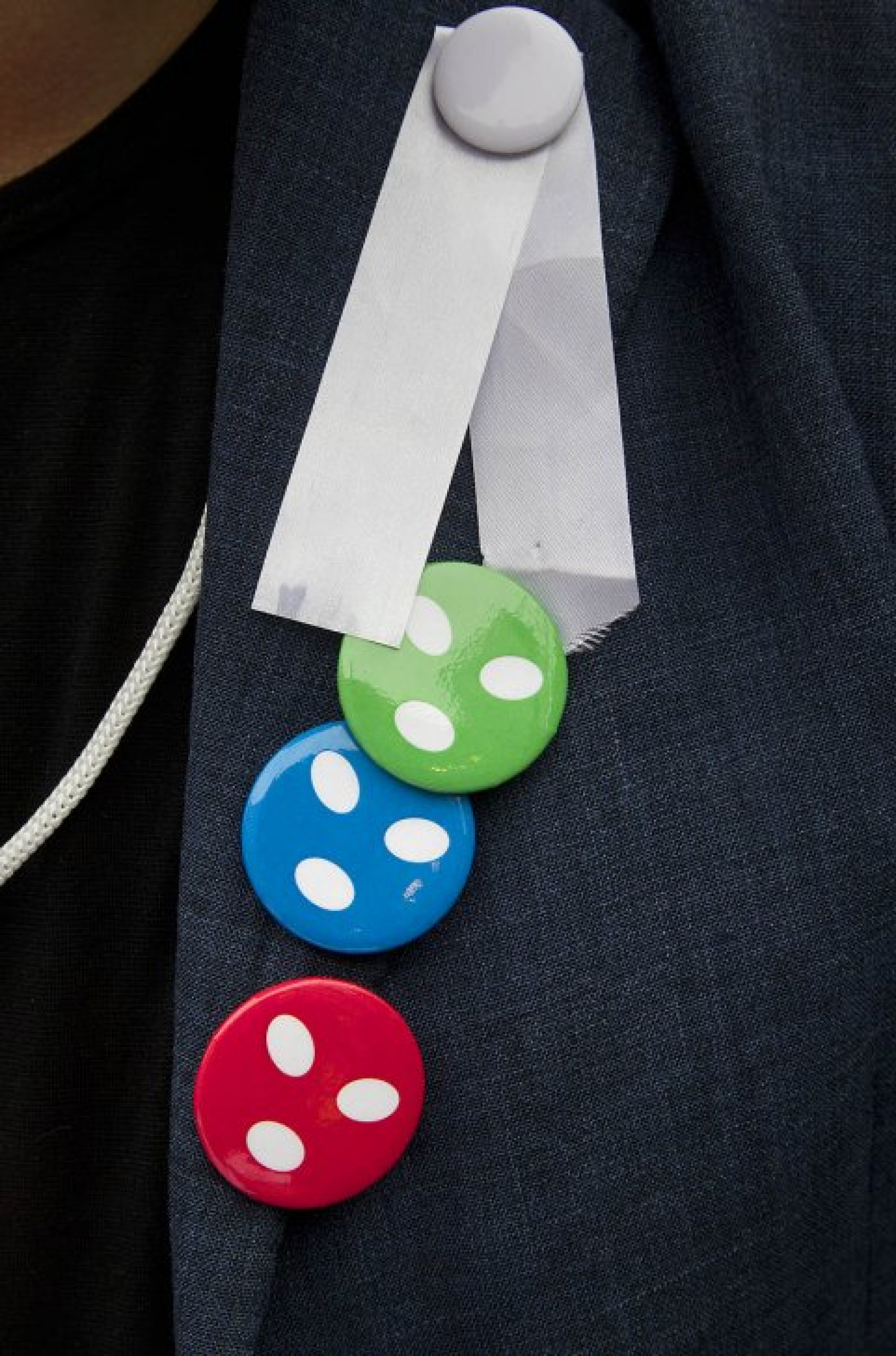 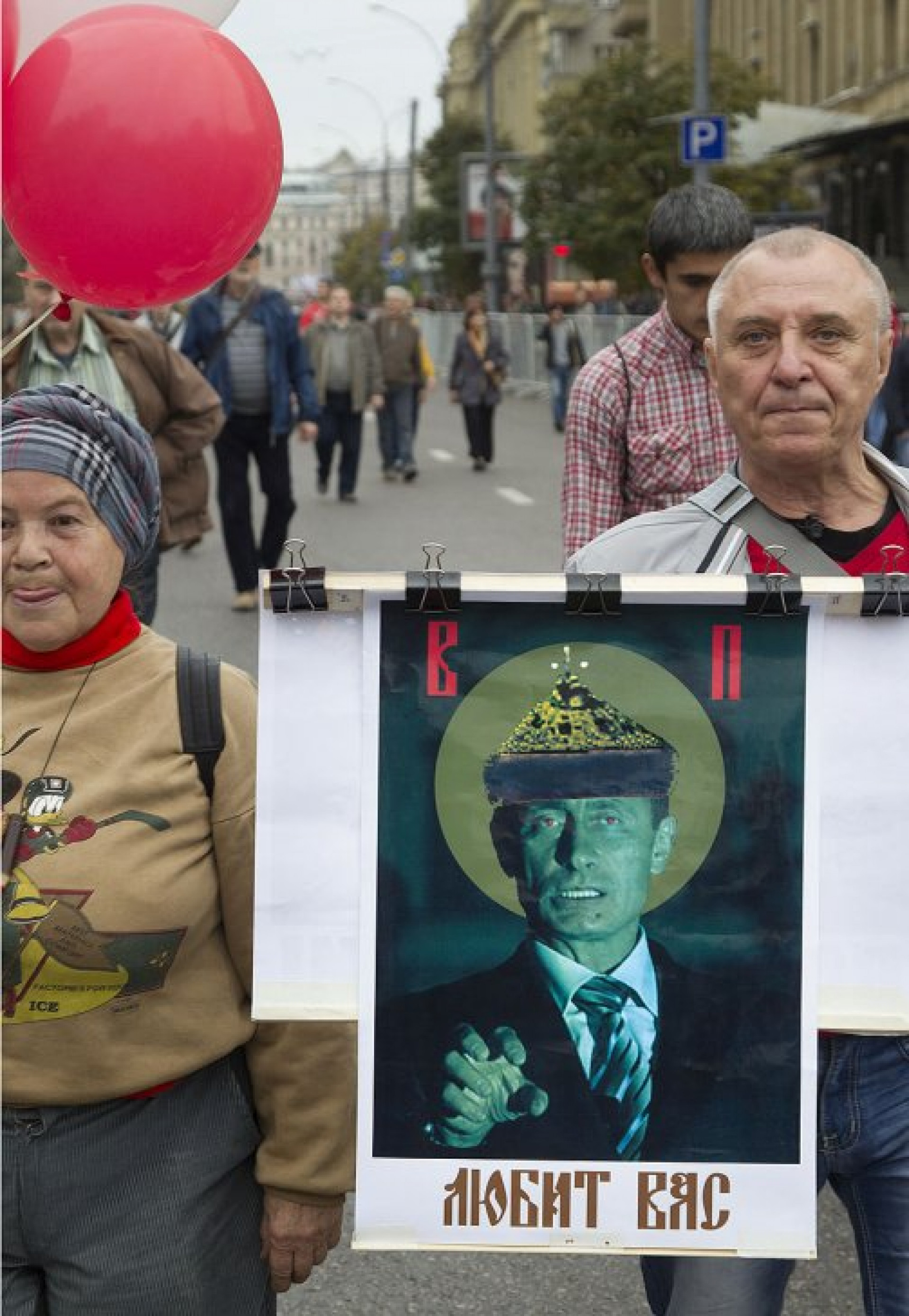 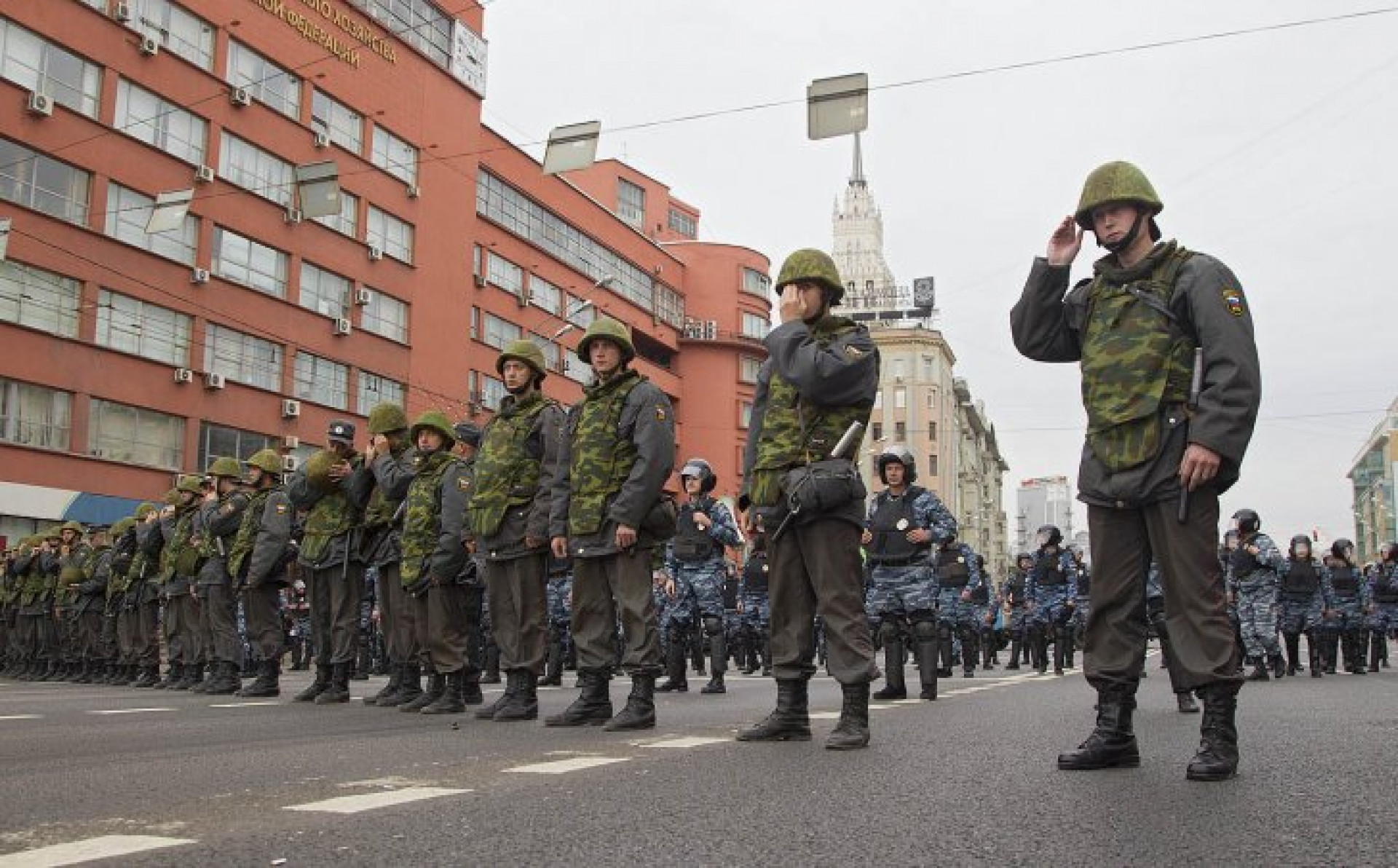 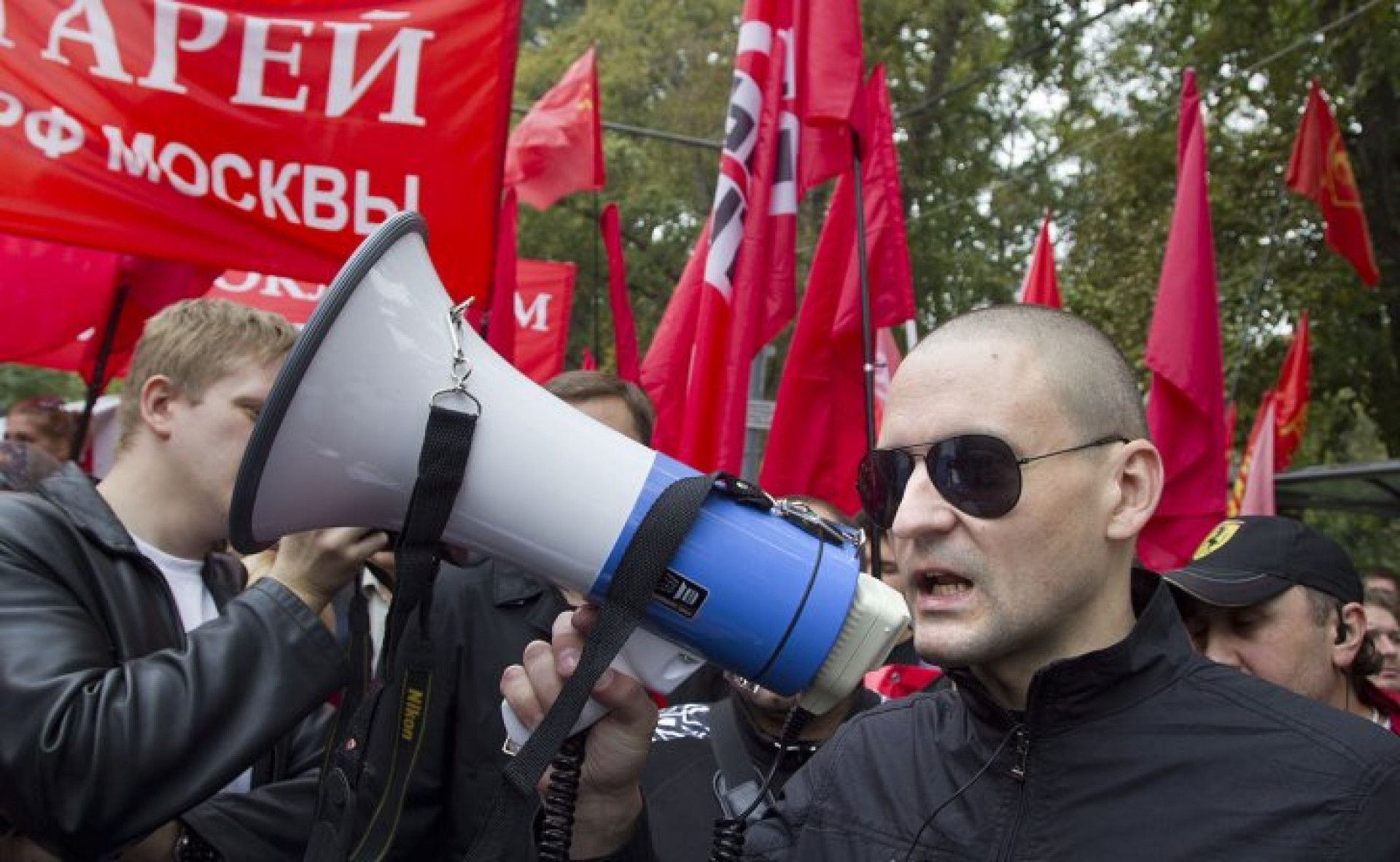 Sending a signal of defiance to President Vladimir Putin, an eclectic crowd of tens of thousands marched peacefully through central Moscow over the weekend, although their numbers appeared smaller than at previous protests.

While opposition leaders trumpeted the protest as the largest yet — more than 100,000 turned out, they said — yawning gaps in the procession and at a rally on Prospekt Akademika Sakharova suggested that fewer turned out than at earlier events. Police, who often underestimate turnouts, said 14,000 people attended.

People gathered Saturday afternoon despite harsh new penalties on illegal demonstrations and the prosecution of at least 17 people — including some who appear to have been swept up randomly — for participation in the clashes during a May rally. Saturday’s rally was sanctioned by City Hall.

Along with well-worn demands for Putin’s resignation and early presidential and parliamentary elections, protesters expressed outrage over the jailing of three members of the punk band Pussy Riot and the ouster of opposition leader Gennady Gudkov from the State Duma on Friday.

“Today, we’re sending a very harsh but peaceful warning to the government. They must understand: Either they find a compromise or they’ll be overthrown,” Gudkov told the applauding crowd.

The speech seemed to capture a growing feeling of anger and frustration within the 9-month-old movement, which has shaken the Kremlin but failed to secure broad democratic reforms.

“We lack personal rage in this struggle,” opposition leader Alexei Navalny told protesters, whose periodic chants of “We are the power!” and “Putin is a thief!” seemed timid compared with those of past rallies, including the one on May 6 that saw violent clashes with riot police and more than 400 detentions.

Indeed, the opposition’s hallmark white ribbon appeared to face more competition than ever before from the nationalist tricolor and the Communist red ribbon, a possible sign of disillusionment with the movement’s predominantly moderate leadership.

But Udaltsov’s calls to defy the rally’s 10 p.m. ending time were mostly ignored, and he and two others were briefly detained for attempting to organize an unsanctioned march, police said in a statement.

About 25 other activists were detained for trying to set up an Occupy-style encampment near the Kitai Gorod metro station, Novaya Gazeta online. In May, a similar encampment served as a gathering point for activists before it was closed by court order.

Activists kicked off Saturday’s march by releasing white balloons and a flock of doves, followed shortly thereafter by chants of “Russia will be free!”

In an apparent effort to widen the appeal of the protest movement, which the Kremlin has construed as a fringe effort spurred on by nebulous foreign forces, opposition leaders included a utility-price freeze and additional investment in education to their list of demands.

There were also calls for solidarity with workers, teachers, armed service members and protesters, who Udaltsov said were demonstrating in more than 50 other cities on Saturday.

Two events in St. Petersburg drew more than a combined 1,000 people, police said, and about 15 people were detained at a chaotic, unsanctioned , Interfax . A video posted on YouTube from the Nizhny Novgorod event showed a riot police officer knocking a young woman to the ground with a truncheon blow after a small group of protesters stole his helmet.

Like earlier rallies, Saturday’s march down the Boulevard Ring looked at times like a carnival of grievances, with everyone from pensioners to anarchists taking the opportunity to hawk their causes. At one point, an ultranationalist chanting “Russian order on Russian land,” marched meters away from LGBT activists waving rainbow flags and shouting “equal rights, no compromise.”

Supporters of Pussy Riot, three members of which were jailed last month for a bawdy performance in a Moscow church, marched alongside a Hare Krishna member beating a drum.

“I think that the majority of people here didn’t come to support a particular leader or party but to support their sense of human dignity,” said Vladimir Eiderman, 60, a mathematics professor, holding a flag with an abstract symbol that he said stood for democratic values.

Several protesters poked fun at Putin’s latest outdoor adventure, in which he dressed up in a billowing, white crane costume and piloted a motorized hang glider to help endangered Siberian cranes.

“Better to be a crane in the sky than an official in the Kremlin,” read one sign, held aloft by a young man in a baseball cap. “We’re not a flock; we’re not a herd. Volodya, get lost!” read another.

A small group of entrepreneurs, including Yevgeny Kruchinin, 55, wore white T-shirts that read, “We grieve for small business,” above a picture of funereal red roses. Kruchinin complained about regulations on kiosks under Mayor Sergei Sobyanin, whose office has waged a sporadic, haphazard campaign against street vendors. “Moscow’s laws contradict federal law, basic human principles, and even the Russian language,” he said.

Notably absent were leaders of the liberal-leaning Yabloko party, who said the event was tainted by the presence of extremists on the left and right. Tycoon and former presidential candidate Mikhail Prokhorov and former Finance Minister Alexei Kudrin also skipped the protest.

By 4:30 p.m., large numbers were already moseying toward the exits. By 8 p.m., the speeches and musical performances stopped, and by 9 p.m. — a full hour before the City Hall-imposed deadline — the stage was being disassembled.

Well before that, United Russia deputies had already begun to crow about the death of the opposition in multiple statements on the party’s website. But the biggest insult appeared to have come from Putin, whose spokesman said he hadn’t been able to follow the protest due to a busy work schedule in Sochi.

Udaltsov said the next March of Millions will take place on Oct. 20.

Correction: An earlier version of this story incorrectly stated that TV host Ksenia Sobchak did not attend Saturday's "March of Millions" protest. Sobchak wrote on her Twitter blog that she planned to attend and later posted photographs of the event.

With its public revelry that occasionally descends into chaos, Paratroopers' Day is one of Moscow's best-known summer traditions.
TOKYO OLYMPICS

Folk performers from across the globe gather to celebrate traditional music and dance.