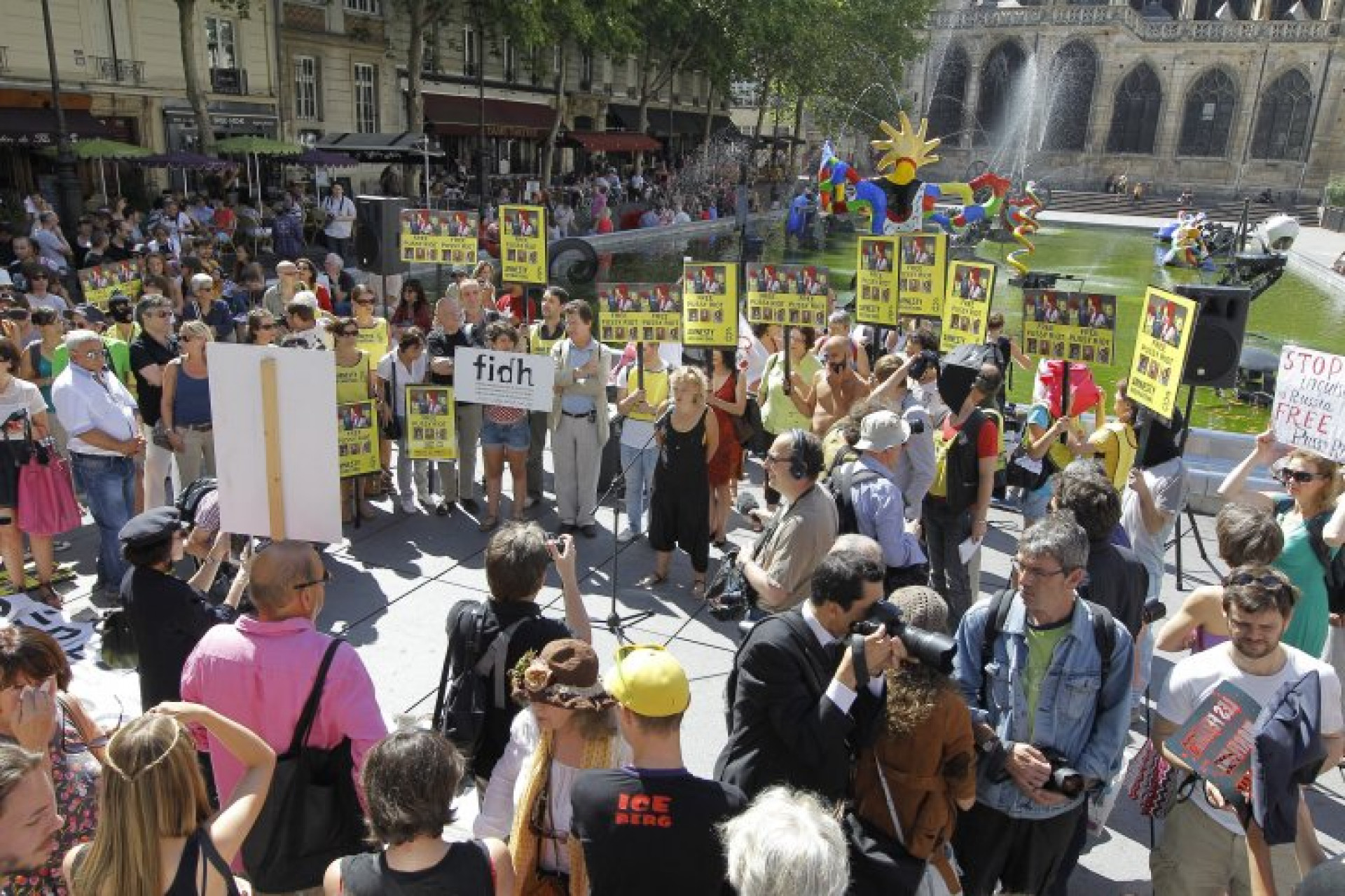 People rallying in Paris on Friday. An organizer monitored the Moscow proceedings by phone, and protesters echoed the chants he reported from Russia. Jacques Brinon 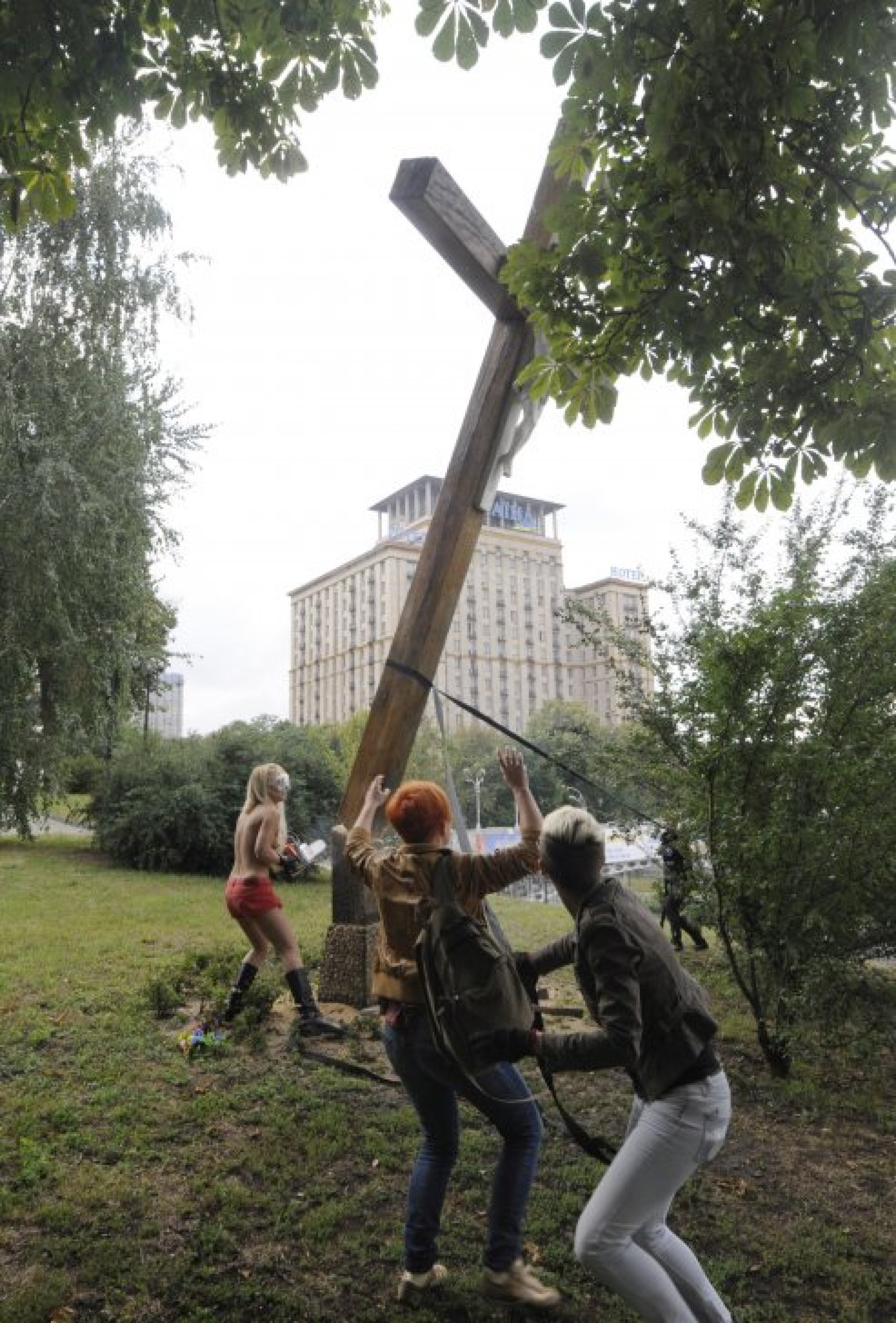 Feminists during a Pussy Riot protest in Kiev toppling a cross erected in honor of victims of political repression. Sergei Chuzavkov 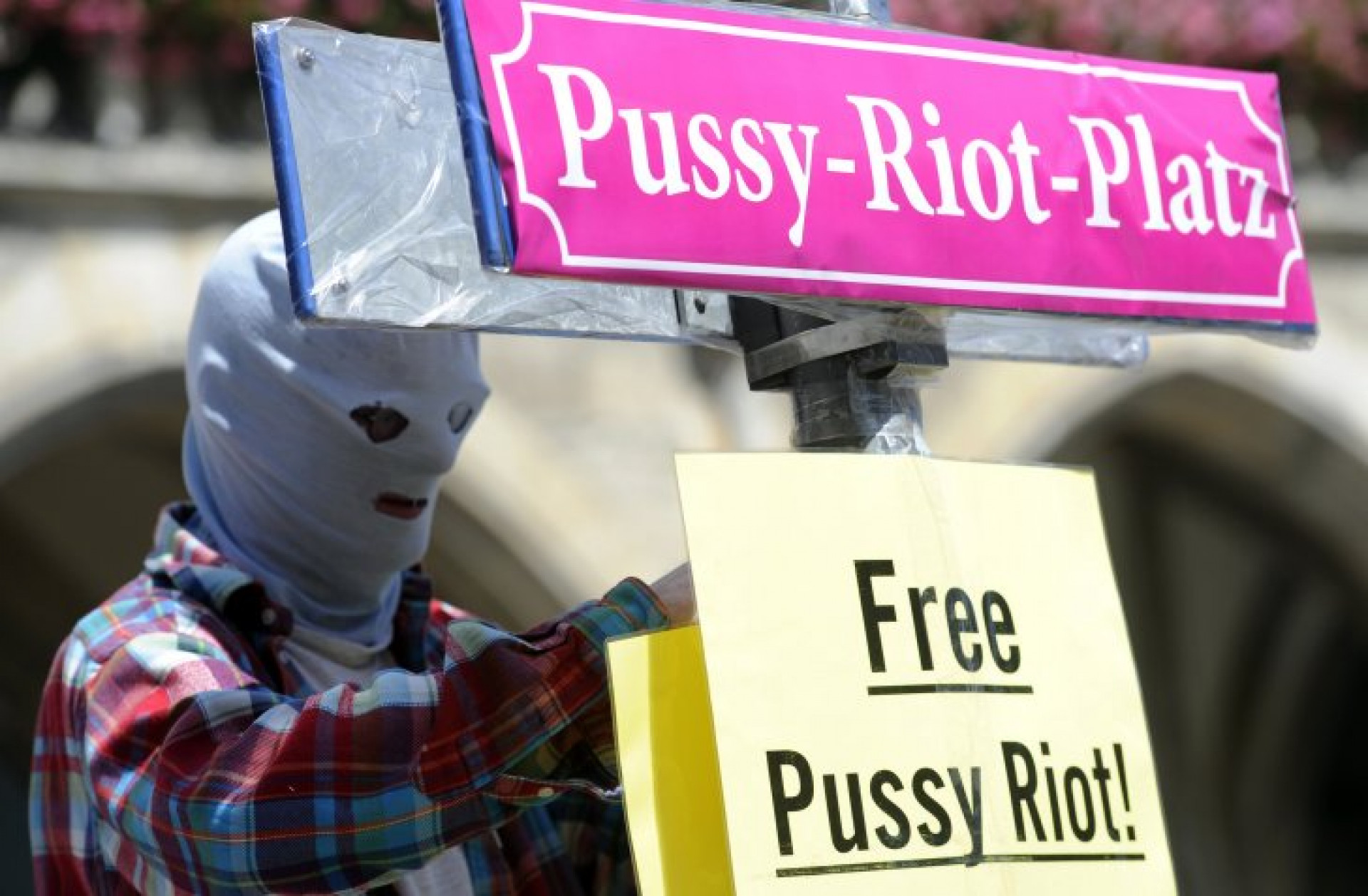 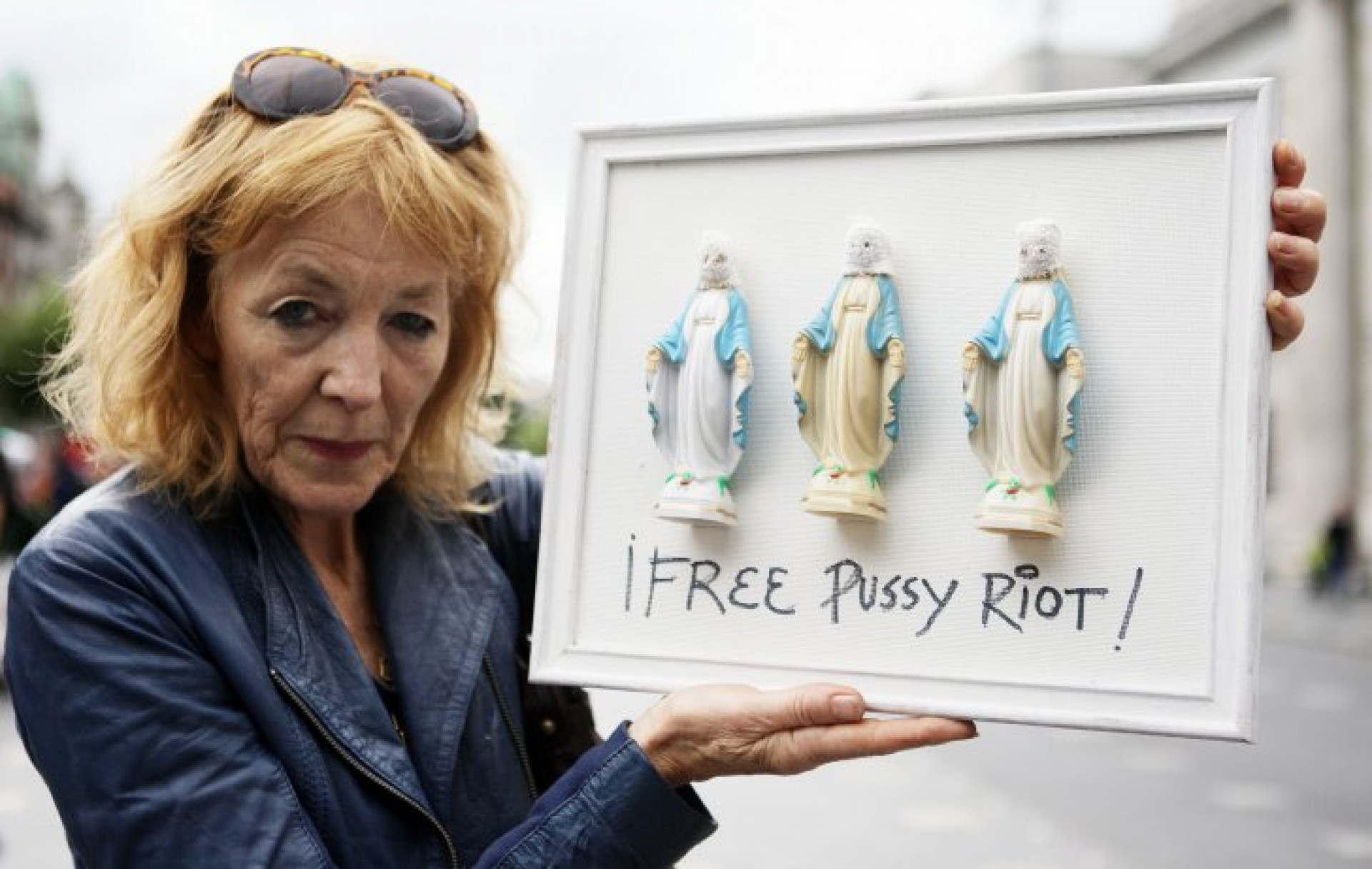 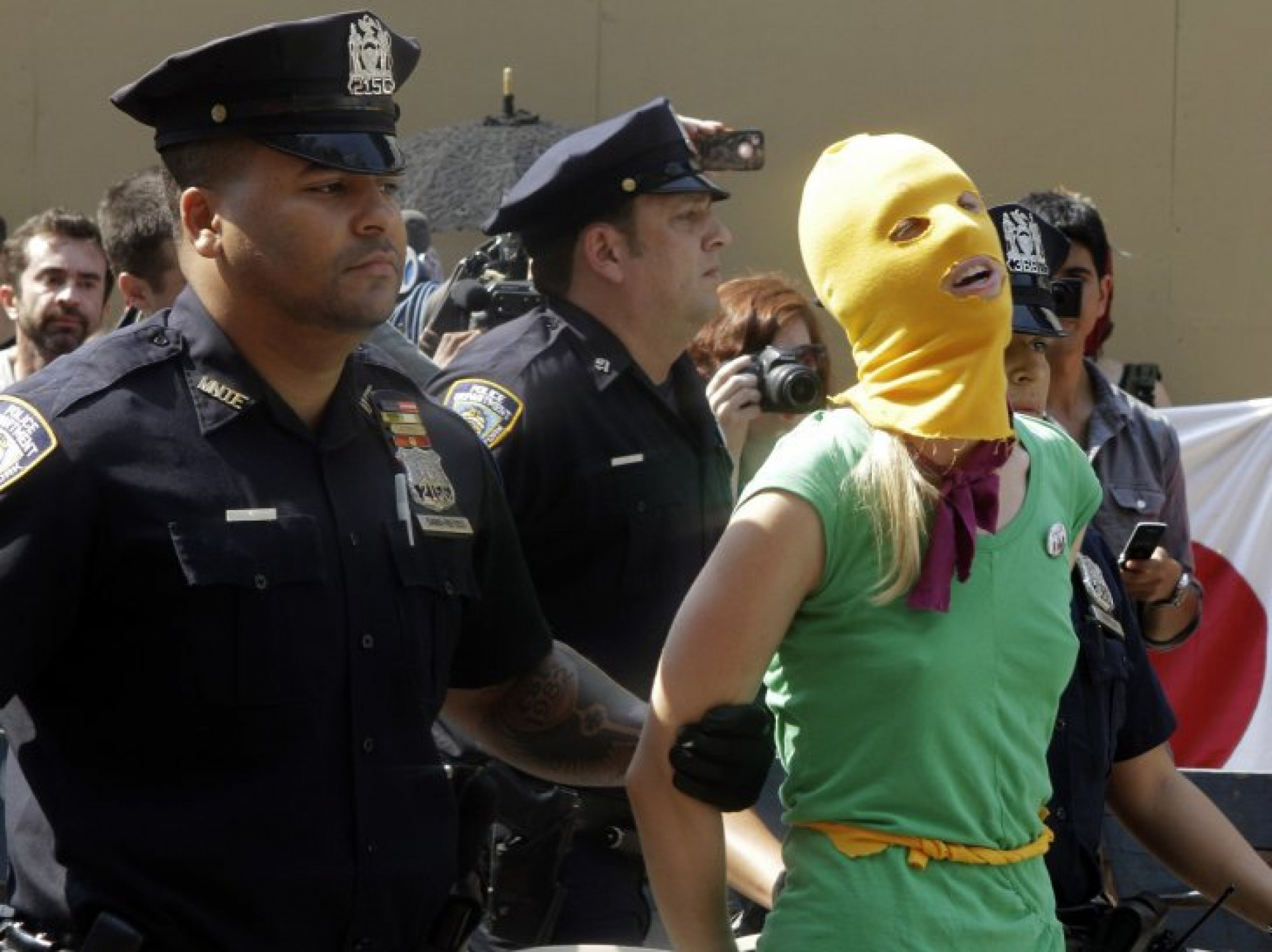 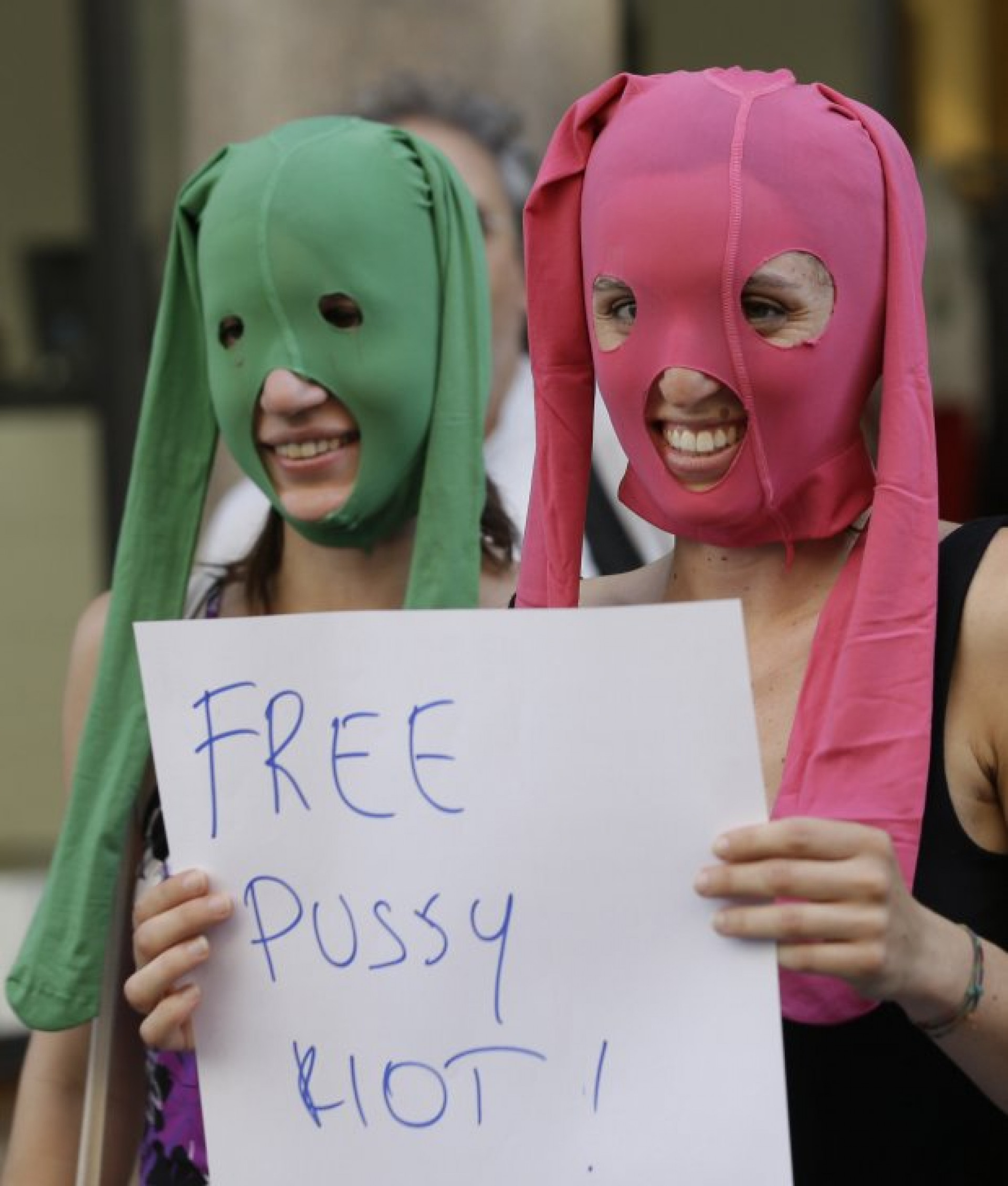 Italians weighing in on the Pussy Riot trial in Milan. Luca Bruno 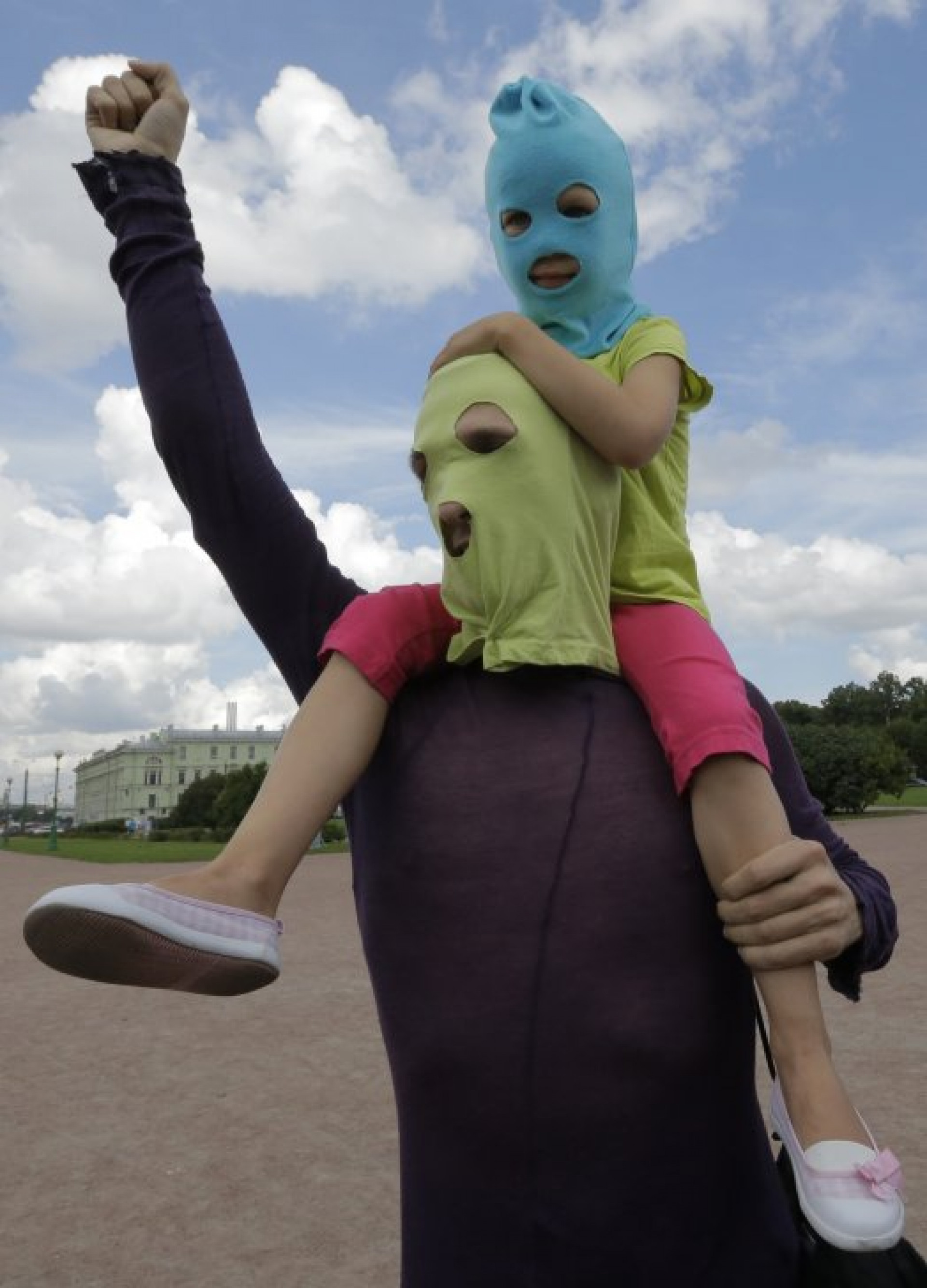 A parent shouting support for the band in St. Petersburg. Dmitry Lovetsky 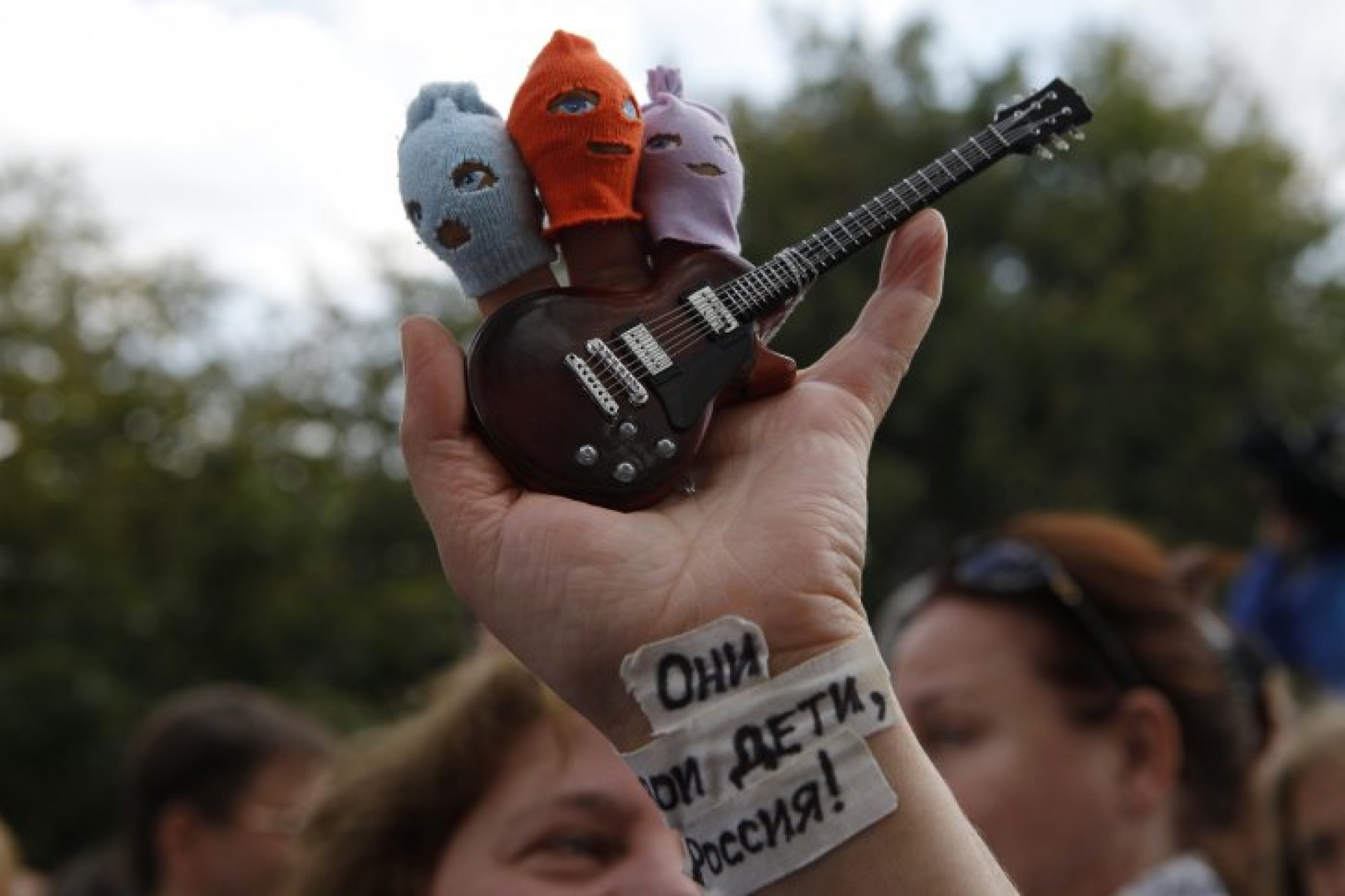 "They're your children, Russia." Alexander Zemlianichenko 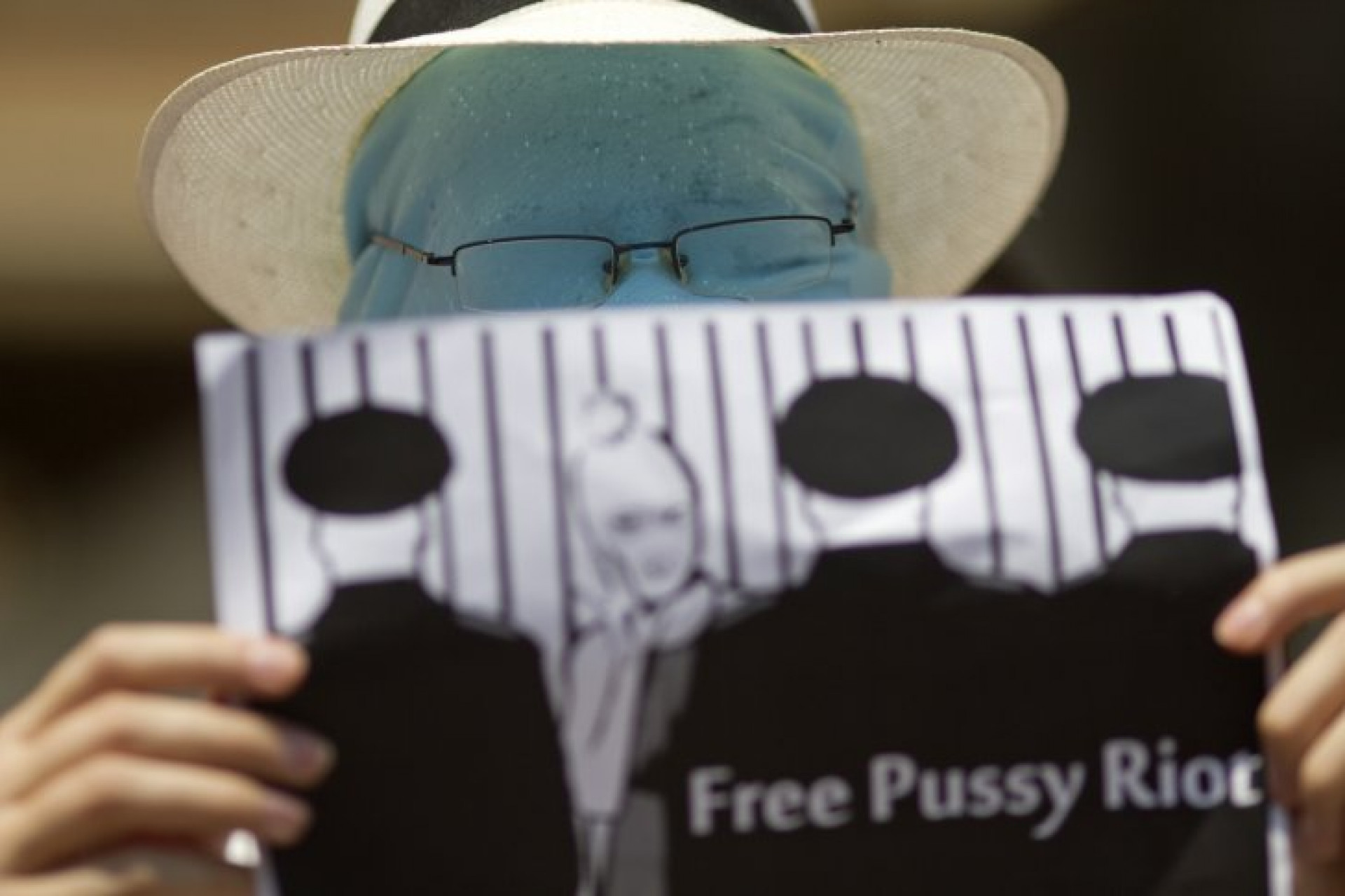 A protester holding a placard at the Russian Embassy in Tel Aviv, Israel. Ariel Schalit 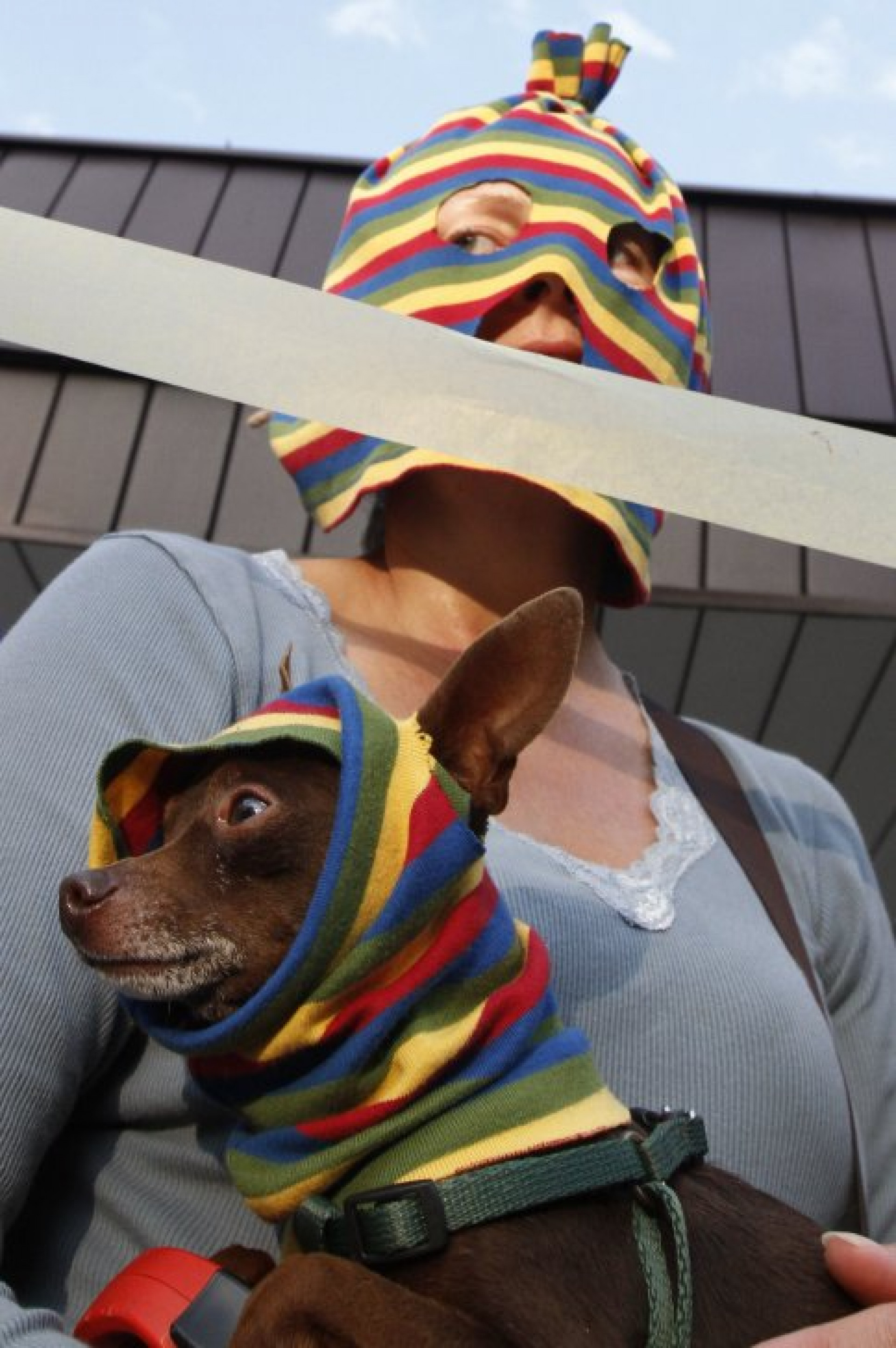 A supporter and her dog in Warsaw. Czarek Sokolowski 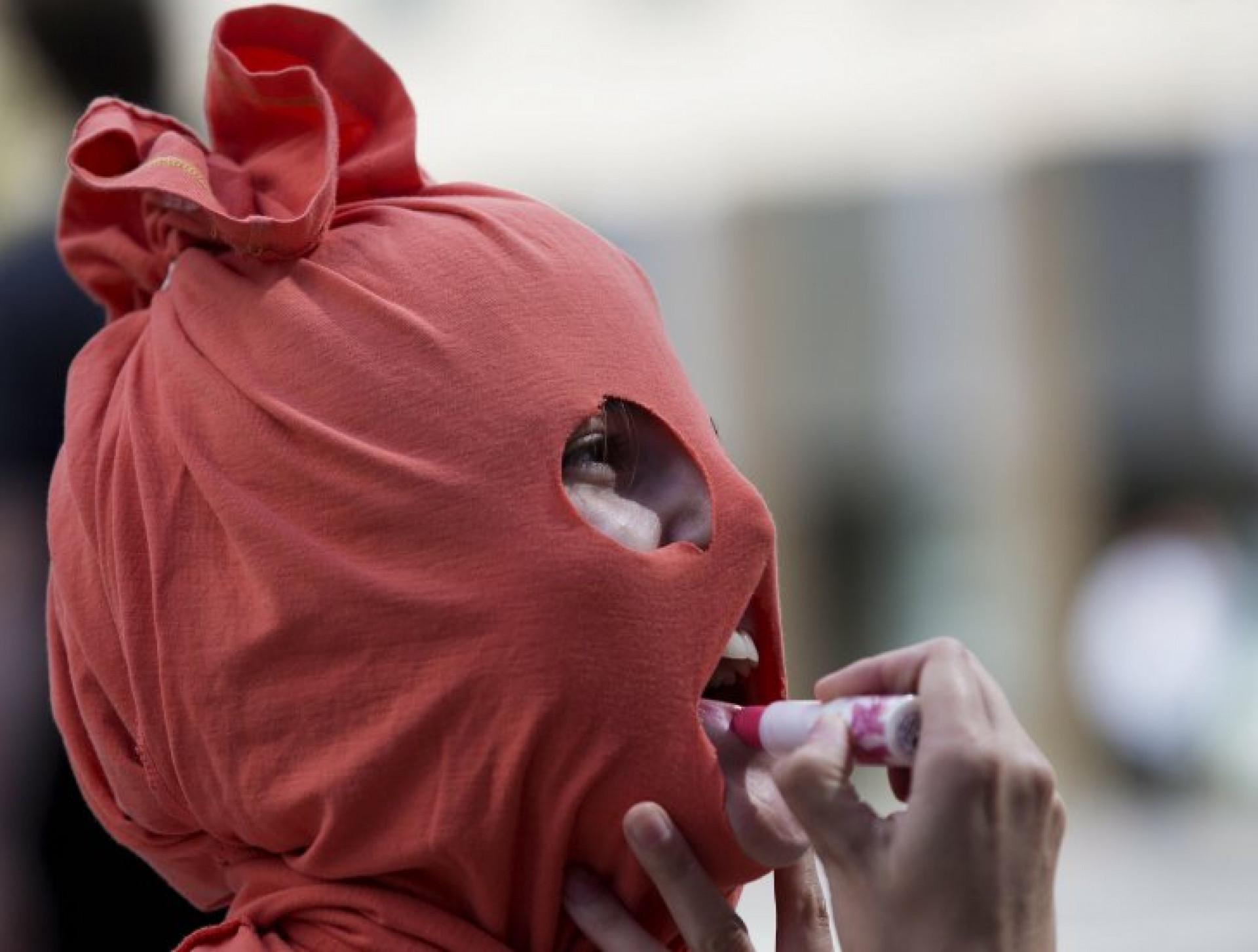 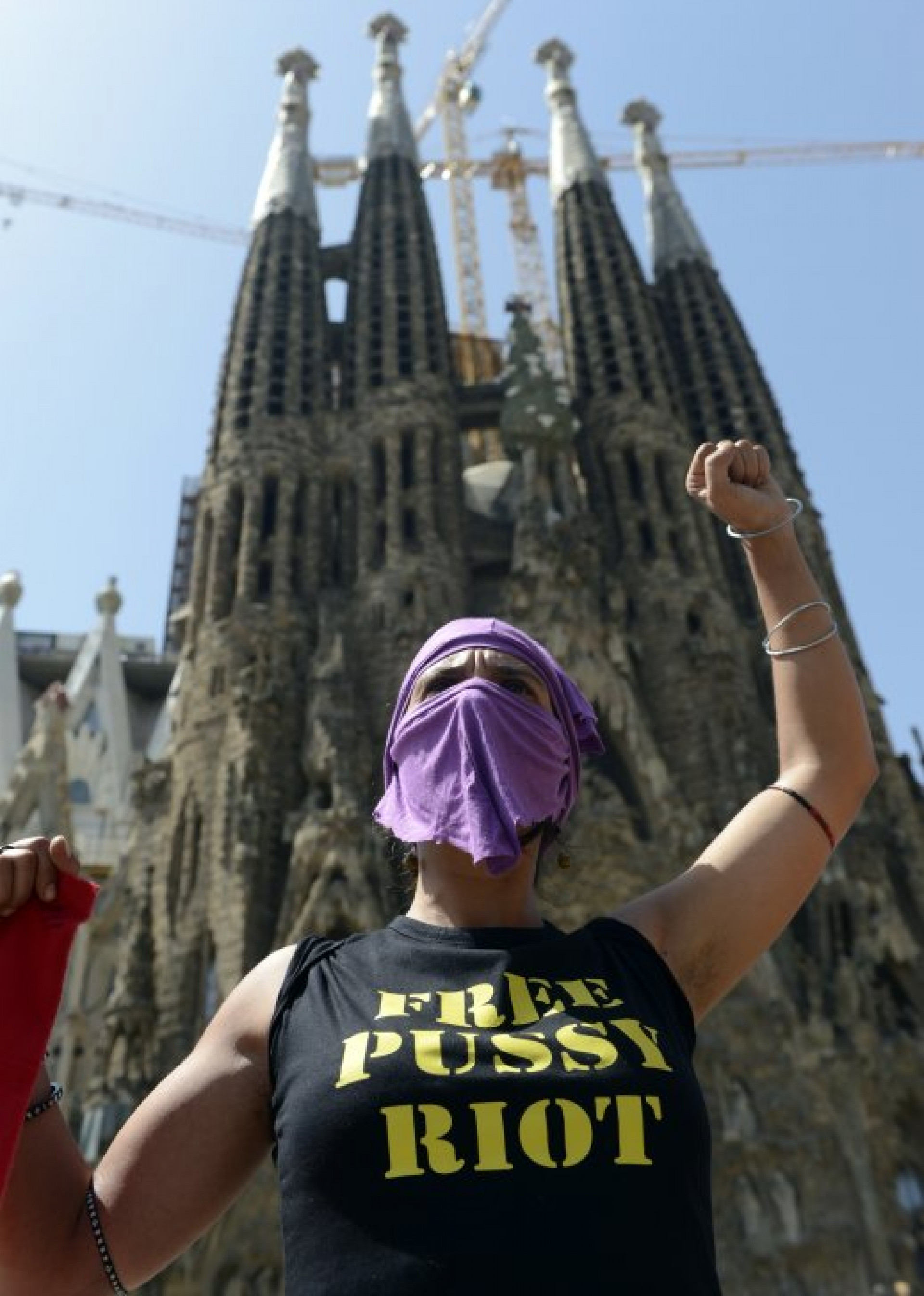 A demonstrator chanting in front of the Sagrada Familia church in Barcelona. Manu Fernandez

They asked for undies on heads, masks, and as much color as possible. They got all that plus a topless activist hacking down a cross in Ukraine, balaclavas on Soviet-era statues of soldiers in Bulgaria, and everywhere signs reading "Free Pussy Riot."

The small but raucous protests were held in a few dozen cities in support of three members of punk band Pussy Riot who were convicted of hooliganism in Moscow. Several dozen people came out in Barcelona, Spain, a couple hundred in Paris, and a handful in Washington.

The three women, who have been in jail for more than five months because of a guerrilla performance denouncing President Vladimir Putin in Moscow's Christ the Savior Cathedral, were each sentenced to two years in prison Friday.

The trial — on charges of hooliganism motivated by religious hatred — has attracted worldwide attention as an emblem of Russia's intolerance of dissent, especially under the reign of Putin, who has moved aggressively in recent months against Russia's opposition activists.

But the call for large global protests in support of the defendants on Friday appeared to draw only a few hundred people to many sites, and they seemed unlikely to gain the momentum needed to exert pressure on Russia's government.

Among those protesting in Berlin was Marianne Birthler, a former East German dissident who was later named head of a post-reunification commission that investigated the East German intelligence service.

"I remember the times when we were in opposition … the signs from other countries were very, very important. So we knew that what we are doing is recognized and there are people who are willing to support us and who follow what happens to us. That's the reason we are here now," she said.

Protesters in Paris, at Igor Stravinsky Square near the Centre Pompidou modern art museum, listened as an organizer monitored the Moscow proceedings on his phone, then echoed the chants he reported from Russia, calling out "Svoboda! Svoboda!" or "Freedom! Freedom!"

In Ukraine, four feminist activists, one of them topless, used a chainsaw to hack down a wooden cross in Kiev's central square in a show of support.

"A cross is a symbol of the repressive religious prejudice that supports dictatorship. Now people who worship the cross want to jail the innocent," said Anna Gutsol, leader of Femen, which chopped down the nearly 6-meter-tall cross put into place during Ukraine's Orange Revolution.

In Barcelona, Spain, more than 50 colorfully garbed demonstrators sang and danced to Pussy Riot songs as they protested outside the large Sagrada Familia church.

"Russia may be a mixture of Europe and Asia, which means it has a unique approach to religion, but we know this is not really a religious issue," said Andrei Viachenko, a 28-year-old Russian doctoral student studying in Spain.

A protest in Washington was more subdued, with 11 people marching in a loose circle in front of the Russian Embassy.

In Sofia, Bulgaria, supporters of Pussy Riot dressed statues on a Soviet-era monument in colorful balaclavas similar to those worn by demonstrators in Moscow.

Protesters from New York to Copenhagen to London also donned the colorful masks — and some men at the gathering in the British capital even wore dresses in solidarity.

"These three girls are just the tip of the iceberg," said Adam Adamson, a 26-year-old who set up the Facebook page for the London protest. "Many have been arrested because they were opposing Putin."

Celebrities including Paul McCartney, Madonna and Bjork have called for the band members to be freed.

About 150 people demonstrated outside the Russian Embassy in Berlin. One sign showed a photo of German Chancellor Angela Merkel embracing Putin with the message, "He hasn't earned it."

The crowd cheered and blew whistles as a woman on stage, wearing a pink balaclava, shouted her message to Moscow through a megaphone: "The world is watching you and we don't like what we see — we are all Pussy Riot."

In Serbia, while anti-Putin activists planned protests in Belgrade, a Serbian far-right group has taken Putin's side. The group Nasi has launched an online game targeting the Pussy Riot members, and says on its website that the women should be sent to a hospital for psychiatric treatment.