Support The Moscow Times!
Contribute today
Support The Moscow Times!
Contribute today
This year’s Olympic medalists on Red Square on Wednesday preparing to receive black Audi sedans for their performances in the London Games. The Russian Olympians Foundation, financed by wealthy businessmen, gave them the cars to accompany cash prizes doled out by the fund.
Vladimir Filonov
By Jonathan Earle
Aug. 15, 2012 - 22:00 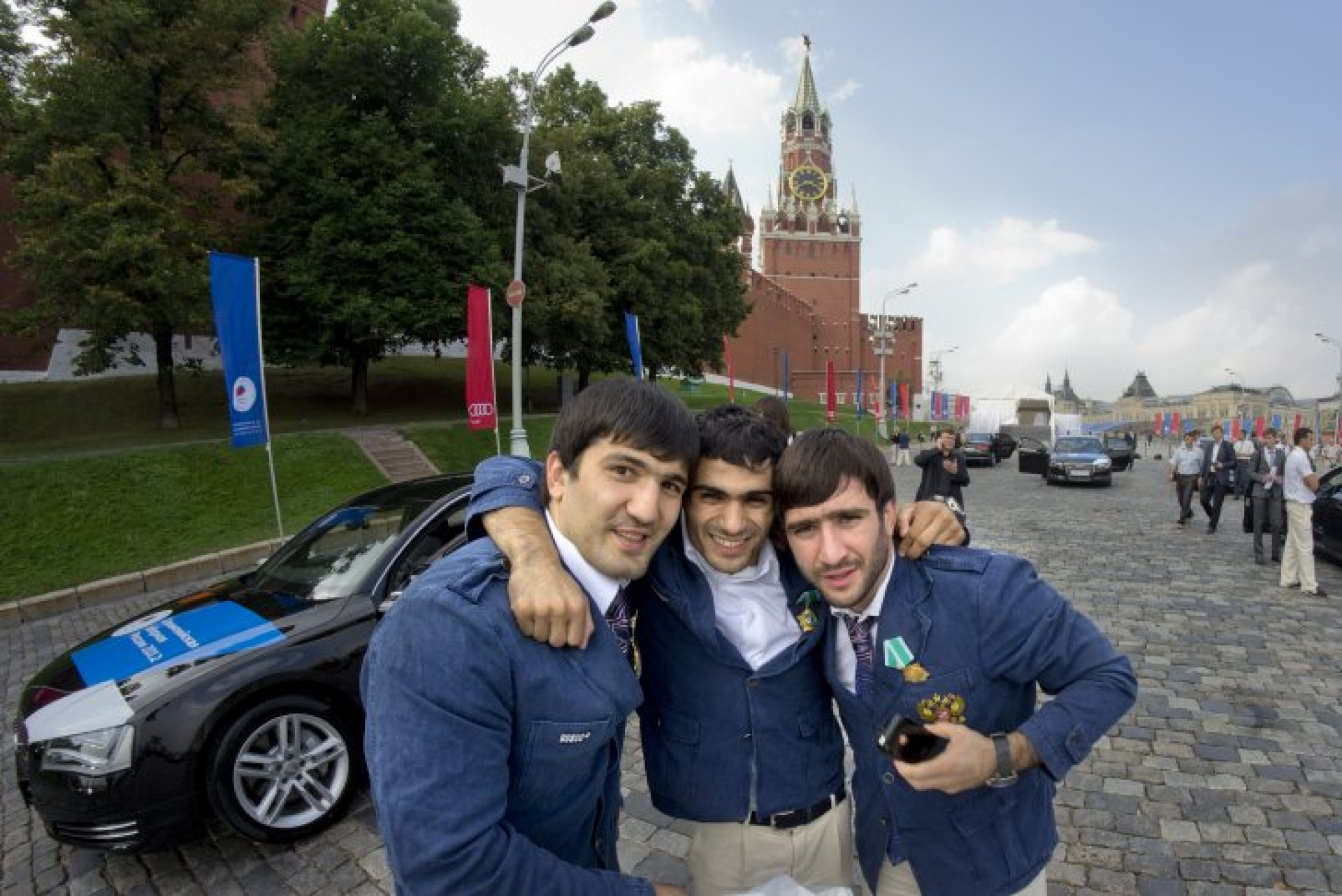 Three medalists celebrating on Red Square, where they gathered to collect their hard-earned rewards for success at the London Olympics. Vladimir Filonov 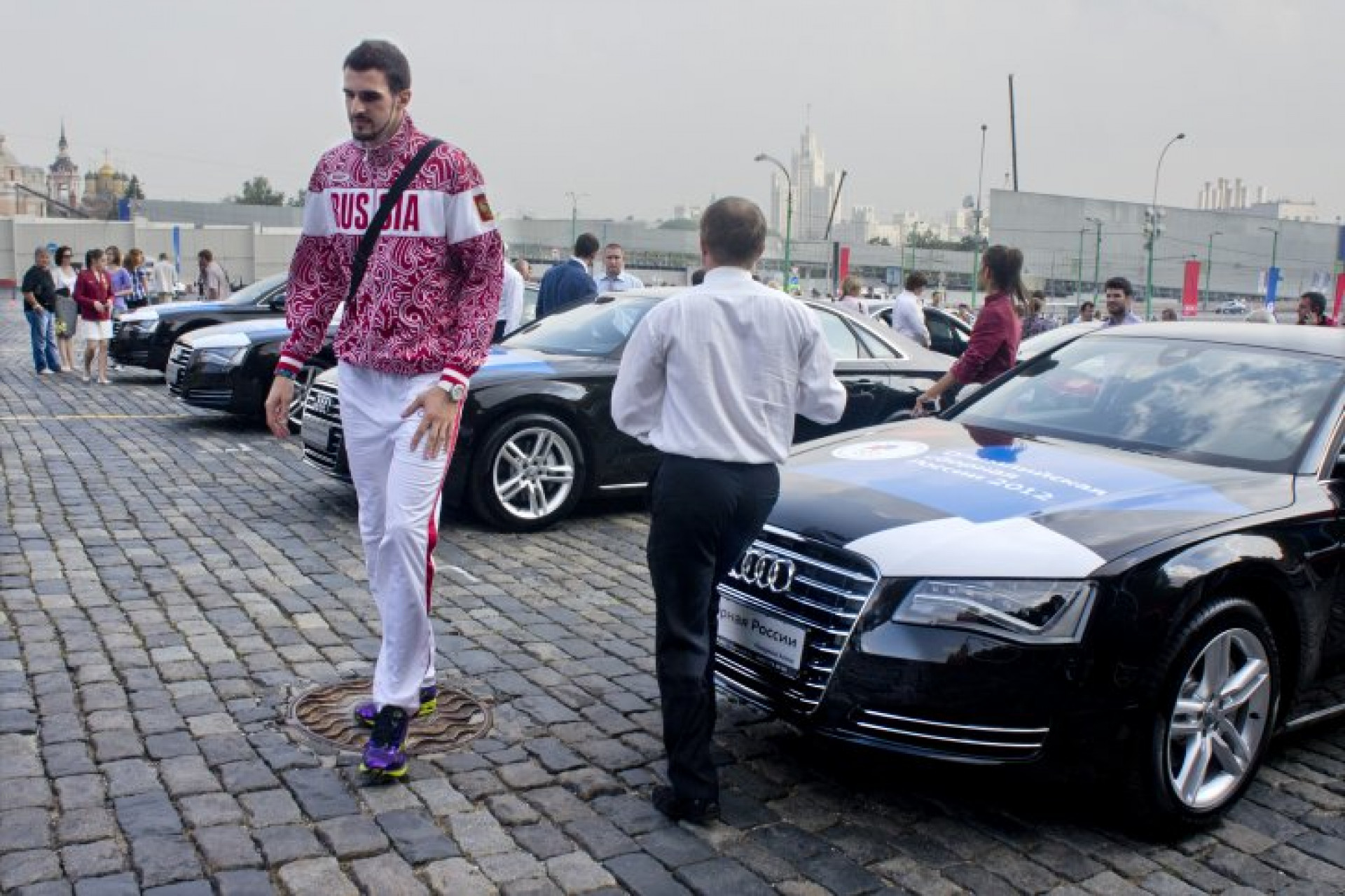 A Russian volleyball player towers over a line of black Audi sedans. In total, 129 were awarded to the country's Olympic medalists. Vladimir Filonov 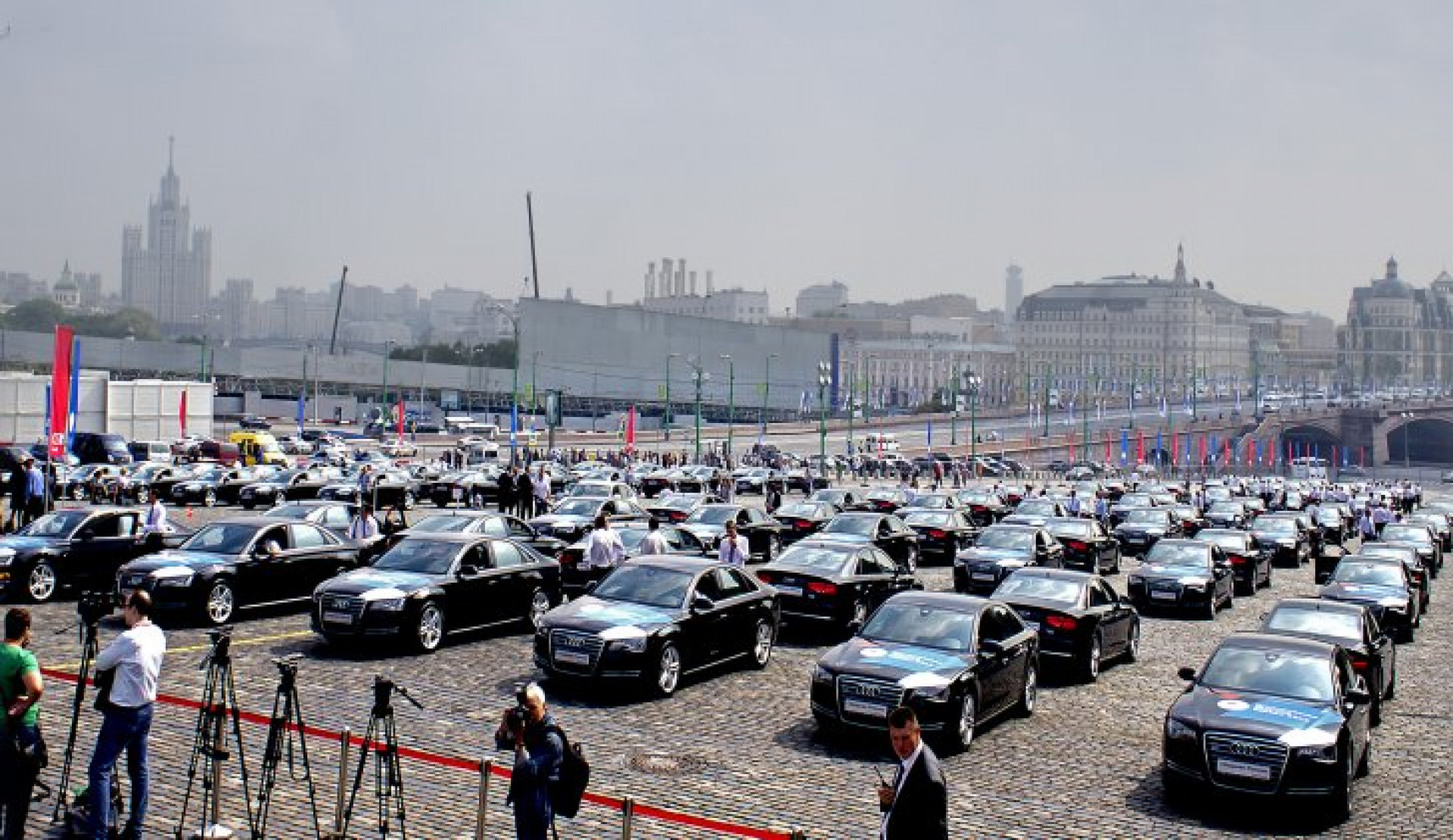 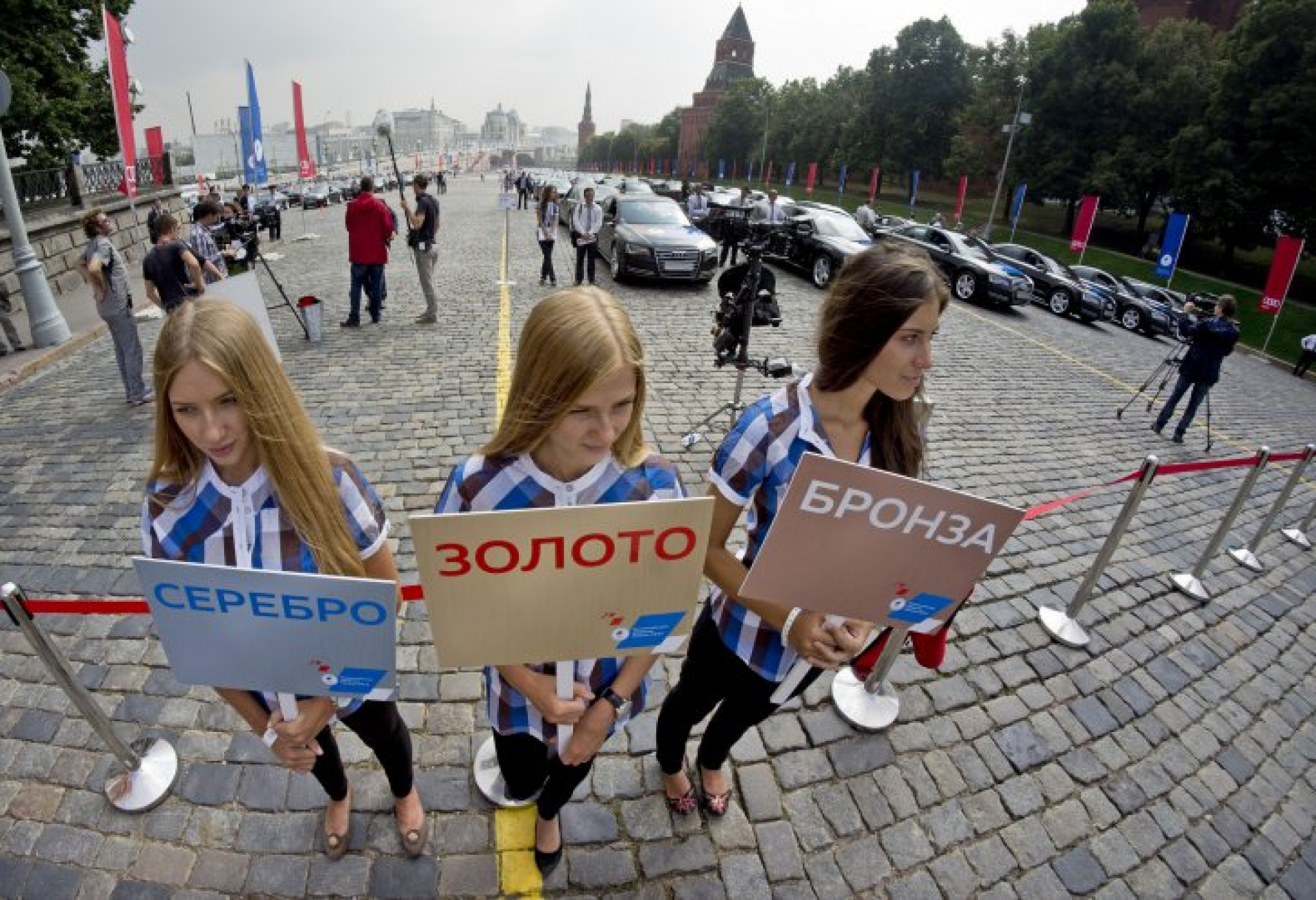 A trio of beauties on hand to guide medalists to their trophy automobiles. Vladimir Filonov 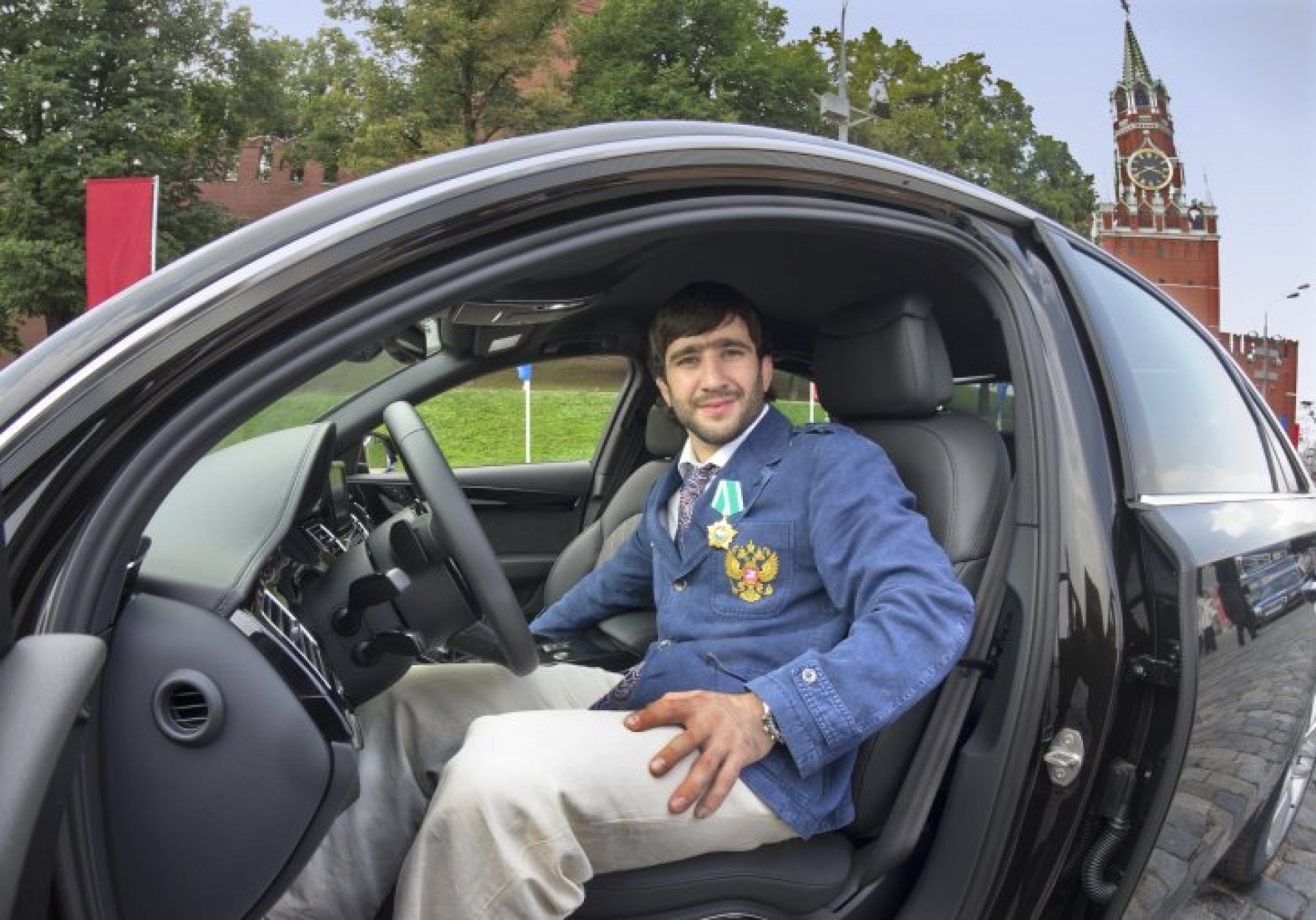 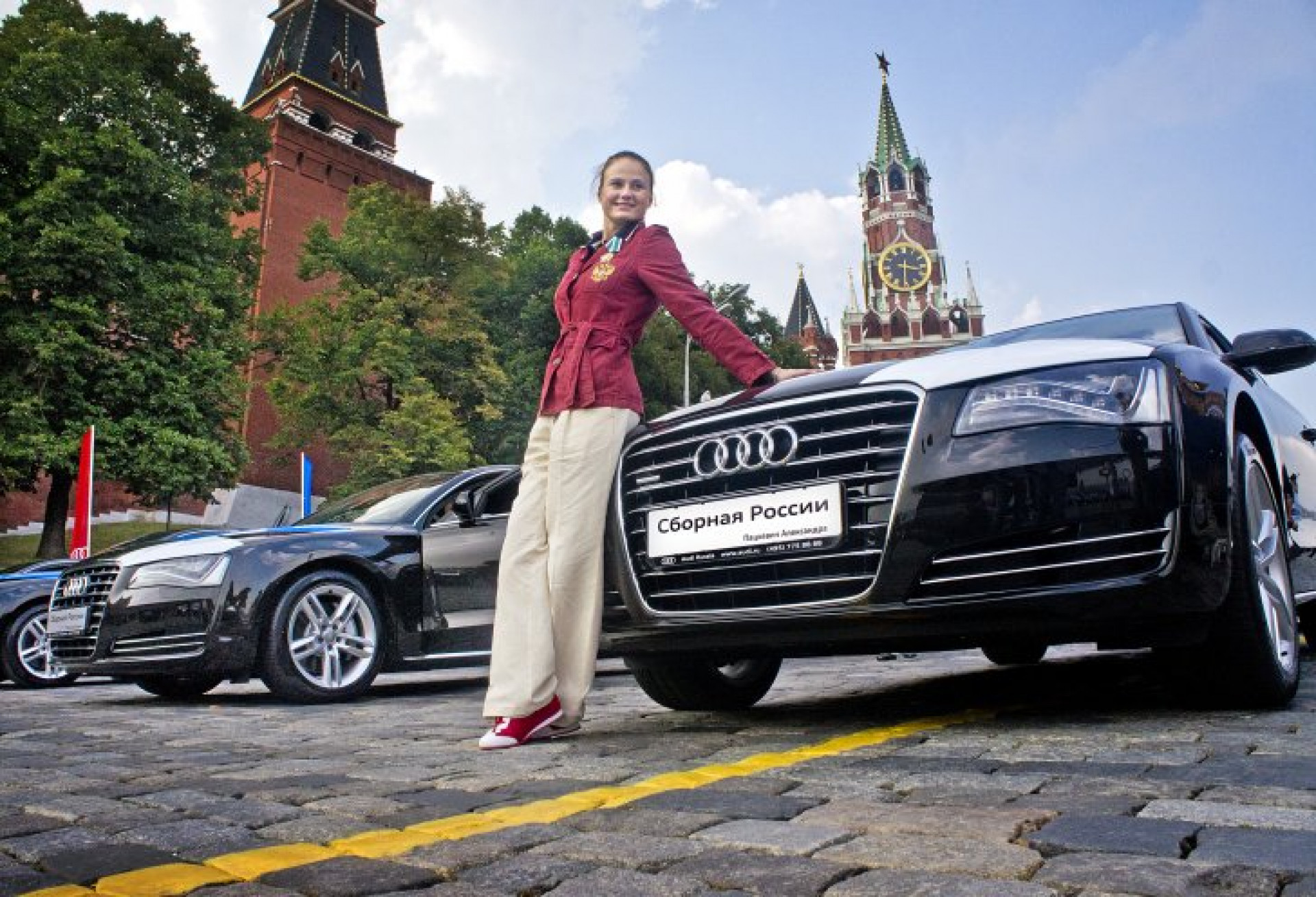 Alexandra Patskevich, part of Russia's dominant synchronized swimming team, posing by the Audi A8 that she won for her gold medal performance. Vladimir Filonov 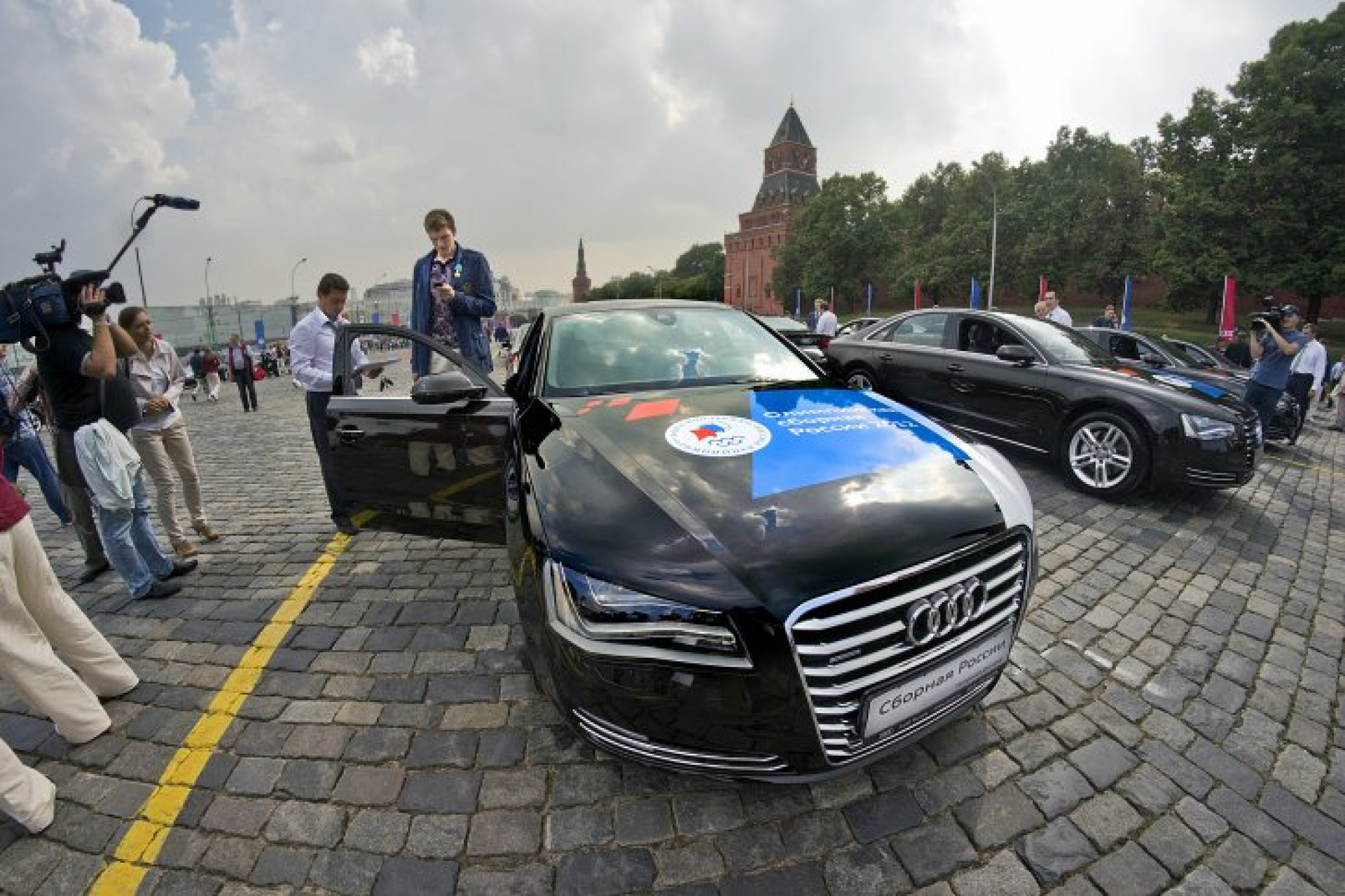 Television crews and reporters standing in the wings, eager to speak to the lucky medalists, who wore outfits designer by official kit sponsor Bosco for the occasion. Vladimir Filonov

Editor's note: For more pictures of Russia's Olympians receiving their luxury cars, take a look at this photo gallery.

Besides fame and glory, this year's Russian Olympic medalists are getting a handsome cash prize and a new luxury car.

The Russian Olympians Foundation, financed by 15 of the nation's wealthiest businesspeople, presented the Audi sedans to the Olympians on Wednesday.

After a closed ceremony in the Kremlin hosted by President Vladimir Putin, the athletes ventured out onto Red Square, where 129 black Audis, accompanied by 129 hired drivers, ties flapping in the wind, were waiting on the cobblestone slope behind St. Basil's Cathedral.

With undisguised glee, the athletes posed for a haphazard photograph beside the historic church, which was lined with cheering fans, including one who'd come all the way from Murmansk.

Sports Minister Vitaly Mutko mingled with the athletes and their graying trainers, at one point stopping to give a female Olympian a congratulatory, two-handed pinch on the cheeks.

Then the cordon was opened and the athletes percolated through the lot, each claiming a car.

The fund's executive director, Alexander Katushev, wouldn't say how much it had spent on the cars, except that they were acquired through an open tender at a "significant discount."

"A fine athlete in a crappy car is like a beautiful girl who cusses. The exterior doesn't match the interior, and this won't do," he told The Moscow Times, adding that athletes in other countries enjoyed similar perks.

Even though athletes interviewed by The Moscow Times said cars and cash didn't motivate them to win, they happily accepted the gifts.

Volleyball player Alexei Obmochayev rifled through his car's glove compartment. He took out the manual to look up the car's horsepower, which turned out to be enough to elicit a devilish grin.

His teammate, Alexander Volkov, carefully folded his towering, 210-centimeter frame into the back seat of one car. "Plenty of room here," he said, hunching forward awkwardly.

One by one, the athletes were driven away by the hired drivers, with the exception of several wrestlers, who insisted on getting behind the wheel.

Gymnast Alina Makarenko, 17, will only be sitting shotgun for the foreseeable future — she doesn't have a driver's license. Makarenko said her mother would drive the A8 until she received one.

"I think if they had been Russian cars, nobody would have shown up," said pole vaulter Yelena Isinbayeva, who won bronze after taking home gold in the last two Olympics.

The nation finished fourth in the total medals count, with 82, including 24 golds, 26 silvers and 32 bronzes.

Running records were set near the Kremlin, while SUP surfers put on a show on the Moscow River.
Forever seventies

North River Terminal Opens in Moscow After More Than A Decade

Residents in the northern part of Moscow have a new river-front park.
Art meets nature

"Laziness" was the theme of this year's landscape art festival.