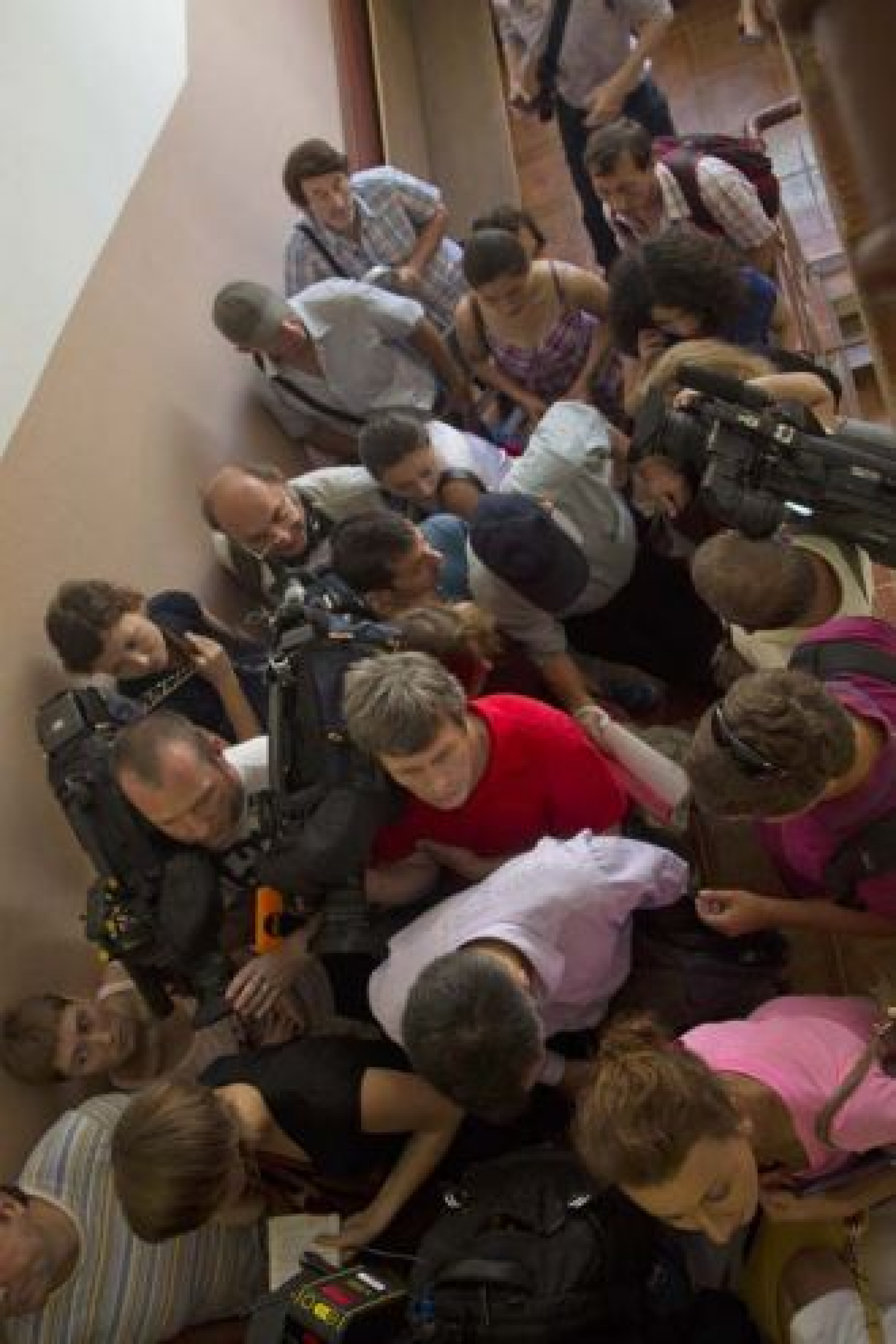 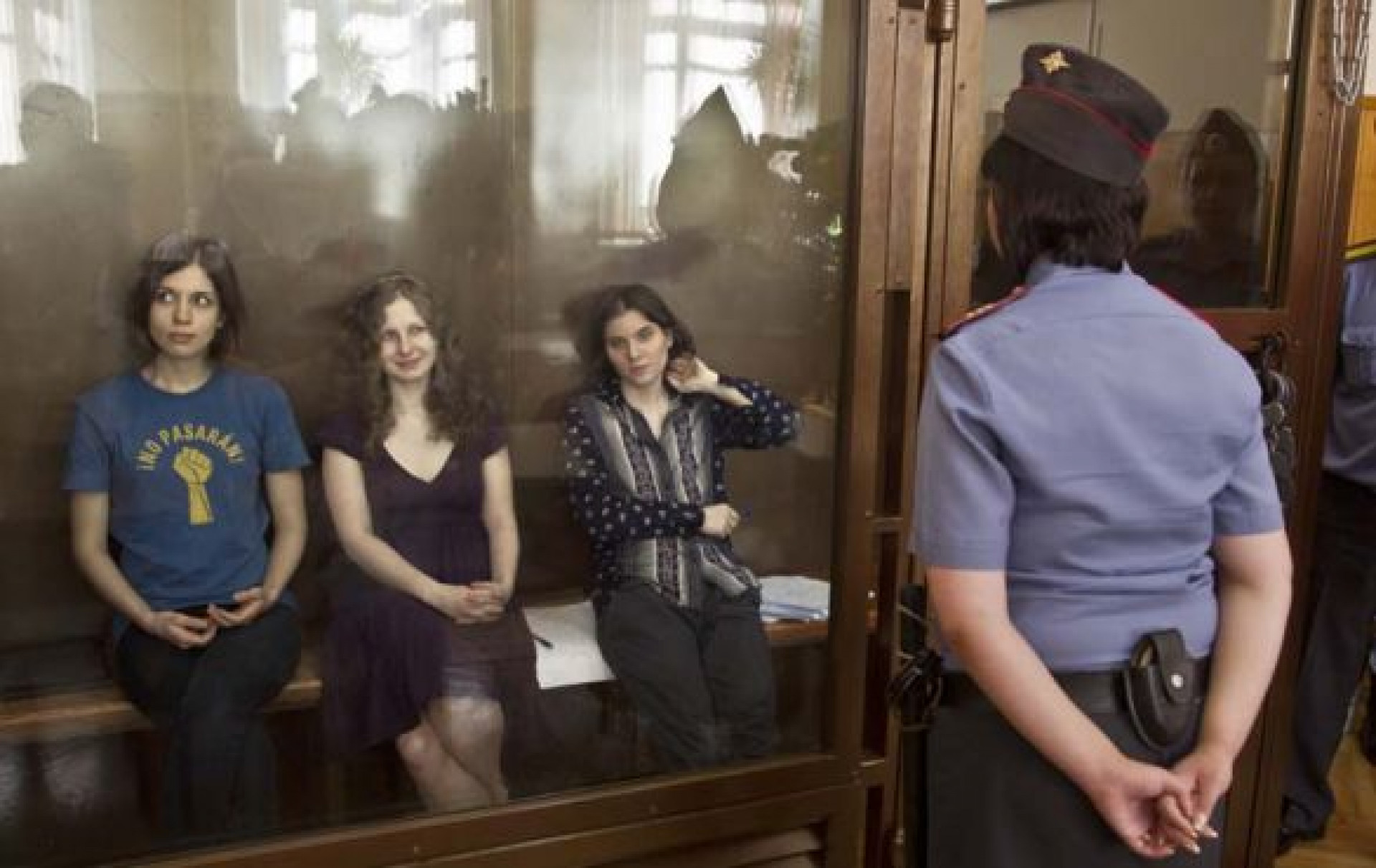 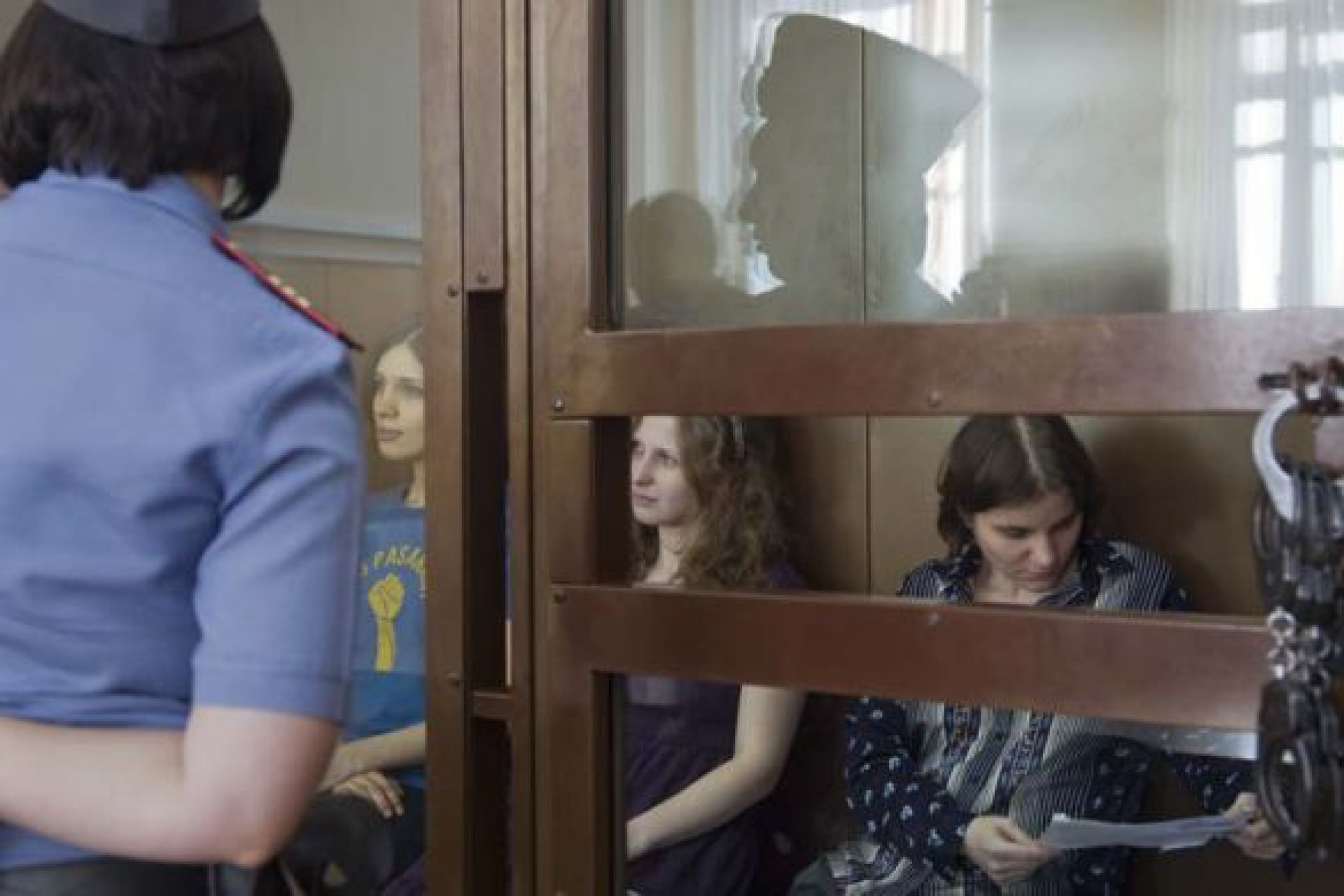 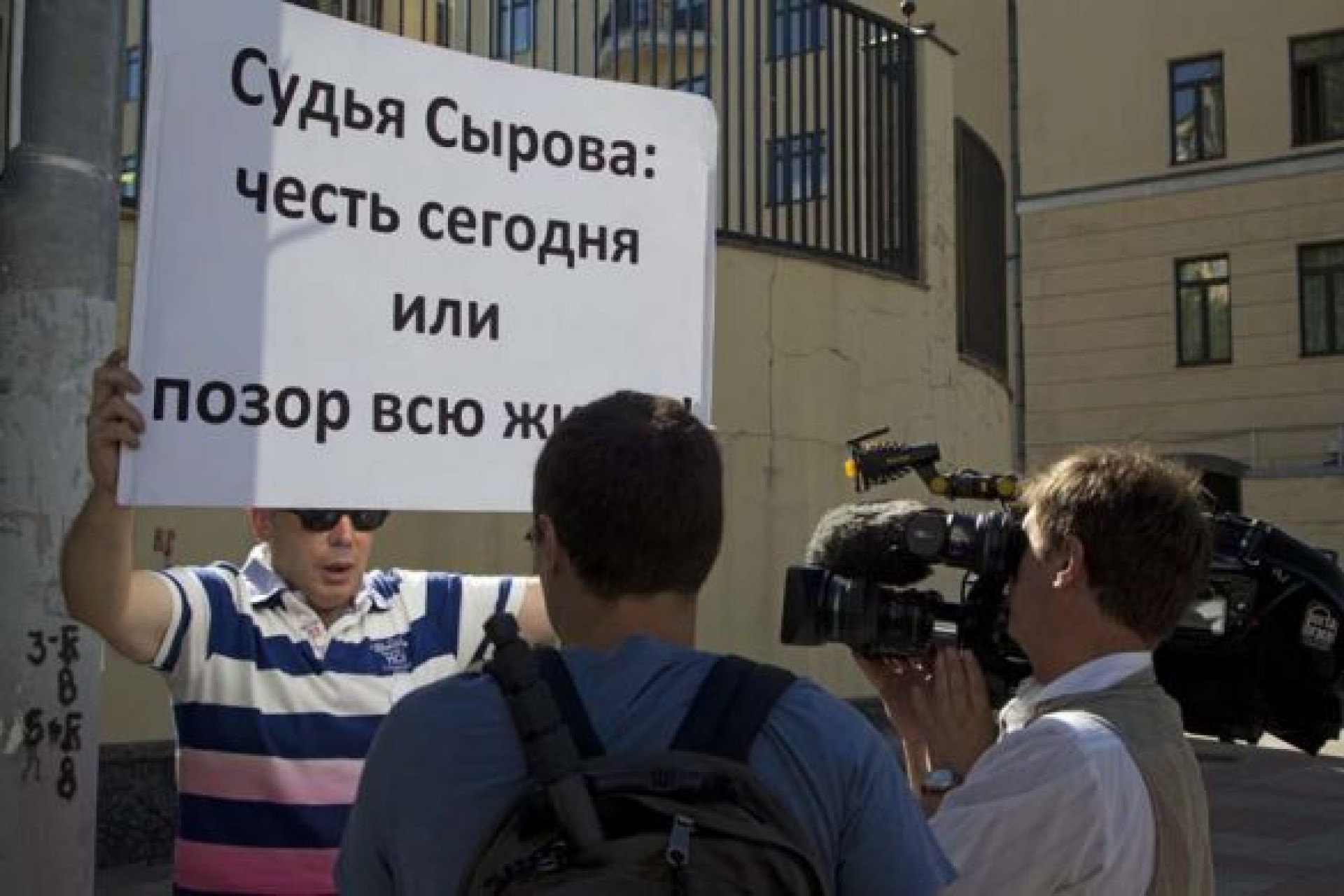 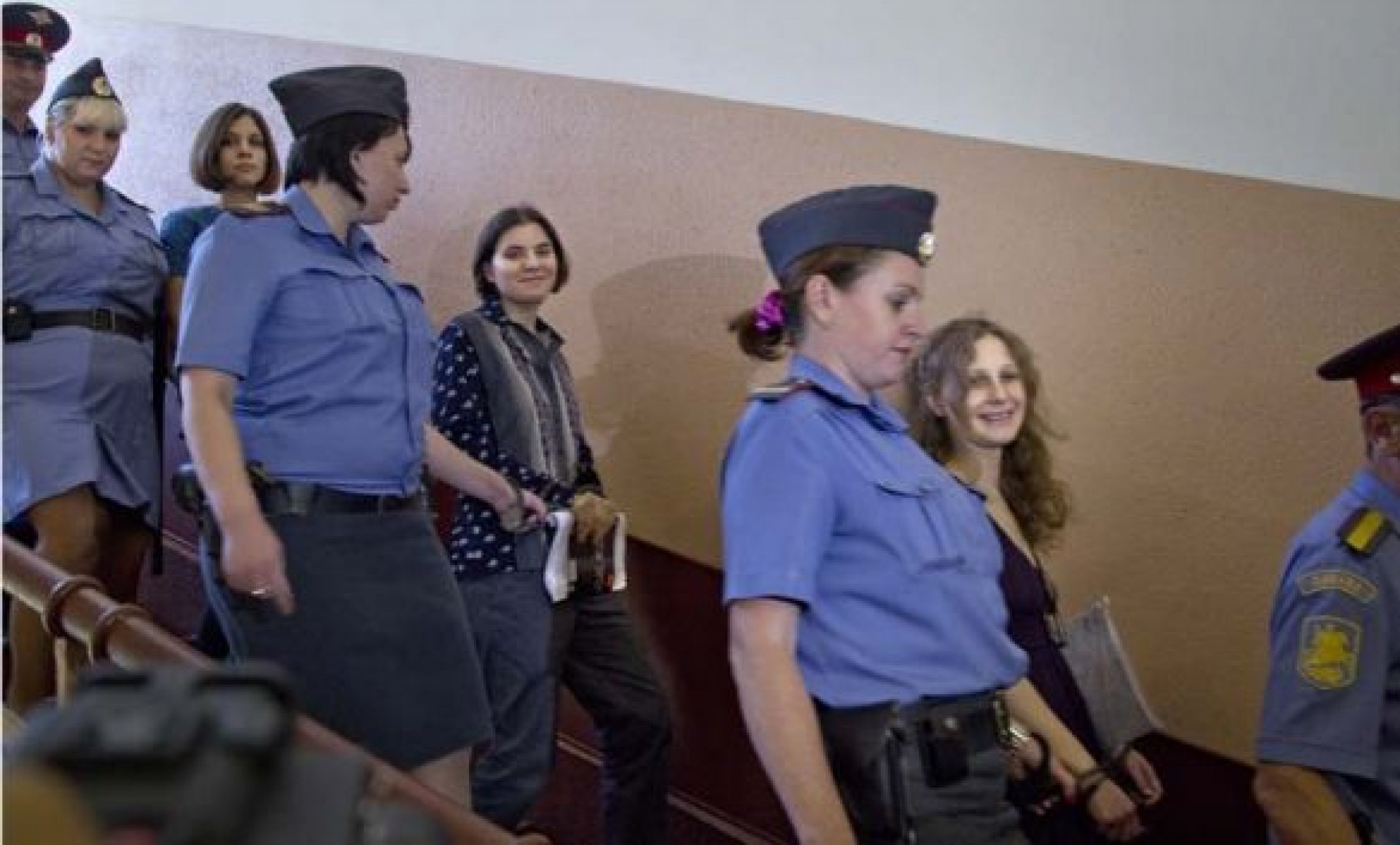 Editor's note: For more on Day 8 of the Pussy Riot trial, take a look at this photo gallery.

The judge presiding over the Pussy Riot trial on Wednesday unexpectedly postponed the verdict until Aug. 17, raising hopes for the defense.

Some believe that the delay could foreshadow an acquittal because President Vladimir Putin's recently requested that the defendants not be judged "too harshly."

Others speculate that the postponement until after the conclusion of the London Olympics was made only to avoid international discontent before the torch is passed to Russia.

The three defendants — Nadezhda Tolokonnikova, 22; Maria Alyokhina, 24; and Yekaterina Samutsevich, 30 — face up to seven years in prison on charges of hooliganism motivated by religious hatred over their February performance at Moscow's Christ the Savior Cathedral where they denounced Putin and Russian Orthodox Patriarch Kirill.

All three defendants have pleaded not guilty.

Alexei Mukhin, head of the Center for Political Information think tank, said the court recessed in order to "let opposition leaders speak out" publicly and "plan to attack authorities based on a possible harsh verdict." Then authorities could "trump their political opponents" by announcing a verdict that is "not so harsh."

Olga Mefodyeva, a chief analyst at the Center of Political Technologies, said the delay was most likely because authorities were trying to find an "optimal way to solve the conflict" in order to satisfy Pussy Riot's supporters as well as critics.

Within the ruling elite, "there is no unified opinion about this case," she said. The band's prosecution might not be "linked to an offense to Putin" but to another "avenger within the elite." She added, "Many people are involved in this case, and many are getting PR for themselves through it."

Both Mukhin and Mefodyeva rejected speculation that the delay was due to the Olympics.

The defendants delivered their final statements Wednesday in the city's Khamovnichesky District Court, denouncing the trial as politically tinged but declaring that given the height of public attention their cause has received, they have won regardless of any verdict.

They also reminded the court that on the first day of the trial they apologized to Orthodox faithful.

"Who is to blame for what happened at Christ the Savior Cathedral?" Tolokonnikova told the court. "The authoritarian system is to blame," she said. "Rigidity and castes rule in Russia."

"We have been looking for real sincerity and simplicity in the foolishness of punk performances," she said, her voice trembling.

That "not all Russia is condemning us" proves "some kind of failure within the political system," she added.

"Despite the fact that we are behind bars, we are freer than many sitting here. We can speak our minds, but they can only say what political censorship allows them to," she told Judge Marina Syrova.

The judge looked back at Tolokonnikova from time to time, but the judge's face was emotionless.

The half of the audience sitting farther from court marshals and police applauded Tolokonnikova after she finished her speech, to which the judge angrily called for order.

"We are not in a theater," the judge remarked.

"We are not guilty," Alyokhina pleaded. "The whole world is saying this — at concerts, in the press, in parliaments. … The British prime minister, instead of questioning Putin about the Olympics, asked him why three innocent girls were imprisoned. This is a shame."

"You are being insidious by not accepting our apologies. I don't understand what else do you need!" Alyokhina shouted, on the verge of tears.

Once again, the audience applauded, this time angering a court marshal who exclaimed, "Keep your emotions to yourselves, you've already been told."

"Our performance led smart people to think that Orthodox culture doesn't only belong to Putin and the patriarch; it can be used by protesters. That is why perhaps there is so much public attention," Samutsevich said, hastily reading a written statement.

"We are in jail. Therefore we have lost," she said. "But, on the other hand, because the whole world sees that the trial against us has been fabricated, we have won."

When the audience applauded Samutsevich, the court marshal only sighed wearily.

The judge then announced that the verdict, which had been expected this week, would be read next Friday. When police led the women out of the courtroom, another storm of applause broke out.

Natalya Alyokhina, mother of Maria Alyokhina, told The Moscow Times outside the court that she expected a guilty verdict but wasn't sure whether it would entail jail time.

"I have an impression that something absurd is going on," she said, smoking one cigarette after another. A 15-day administrative arrest would have been a "normal" punishment for the defendants, she added.

Stanislav Samutsevich, father of Yekaterina Samutsevich, said he was "at a loss" about a possible verdict. "On the one hand, Putin spoke out, while on the other hand, [the defendants] have said a lot and I don't know how the authorities will view that."

The women should have been fined for a misdemeanor, he added.

Outside the court, a crowd of 200 greeted defense lawyers with applause. They surrounded the lawyers, leaving little space for them to stand in.

"The authorities have taken recess, apparently in order to finalize their actions," defense lawyer Mark Feigin said before about two dozen television cameras. "They are facing a difficult choice: to acquit or convict the innocent."

Defense lawyer Violetta Volkova told the cameras that the authorities had "the last chance to issue an acquittal" and "remain in history with a normal image."

Defense lawyer Nikolai Polozov said that "irrespective of the verdict, we can understand one thing: We have won."

Defense lawyers are planning to stage street protests across the world on Aug. 17 at 2 p.m. Moscow time to support Pussy Riot while the verdict is being read, Feigin said later on Twitter.

Volkova invited supporters and journalists to gather outside Moscow's Detention Center No. 6 on Thursday to celebrate Samutsevich's 30th birthday.

As Samutsevich is not allowed to have visitors, "we will not see her" but "it is a tradition" to celebrate birthdays of defendants outside detention centers and "she will know we are there," Volkova said.

The crowd waited about 90 minutes for the defendants to be led out and chanted "freedom" and "well done" and cheered as the women boarded a police van and were driven away.

A Novosibirsk resident has asked a Moscow court to fine Pussy Riot 30,000 rubles ($950) for mental distress inflicted on her by the video of the band's performance in Christ the Savior Cathedral, Interfax reported Wednesday.