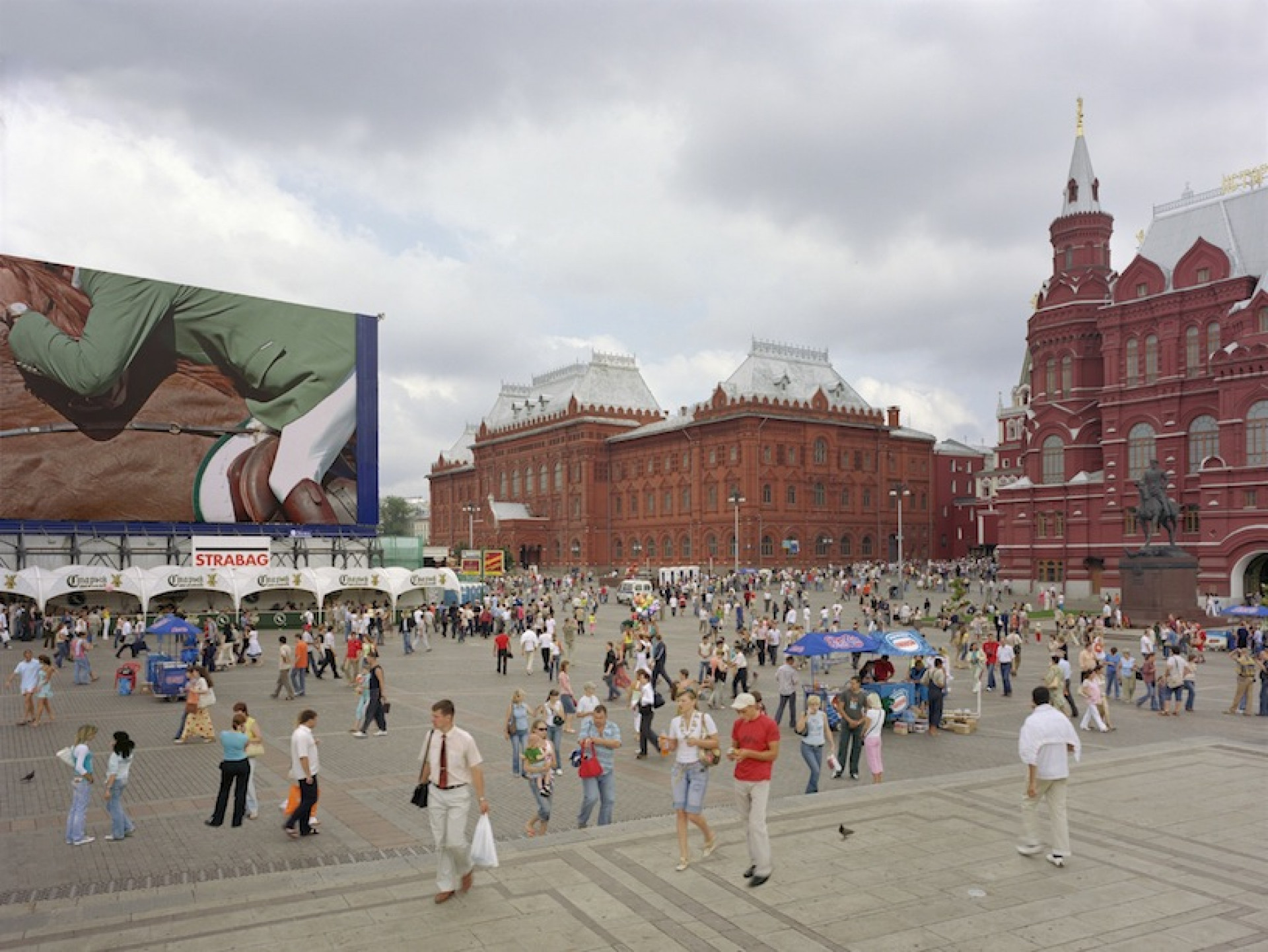 This image of Manezhnaya Square is very characteristic of Doug Hall’s style. He’s photographed several other metropolises, from New York to Singapore, in exactly the same way, capturing the city as a static backdrop for human theater — a vast stage on which tiny people bustle about, as enormous buildings loom behind. The horse in the billboard gallops toward what was once the Moskva Hotel — already razed by 2006 (and later replaced by a Four Seasons). Doug Hall 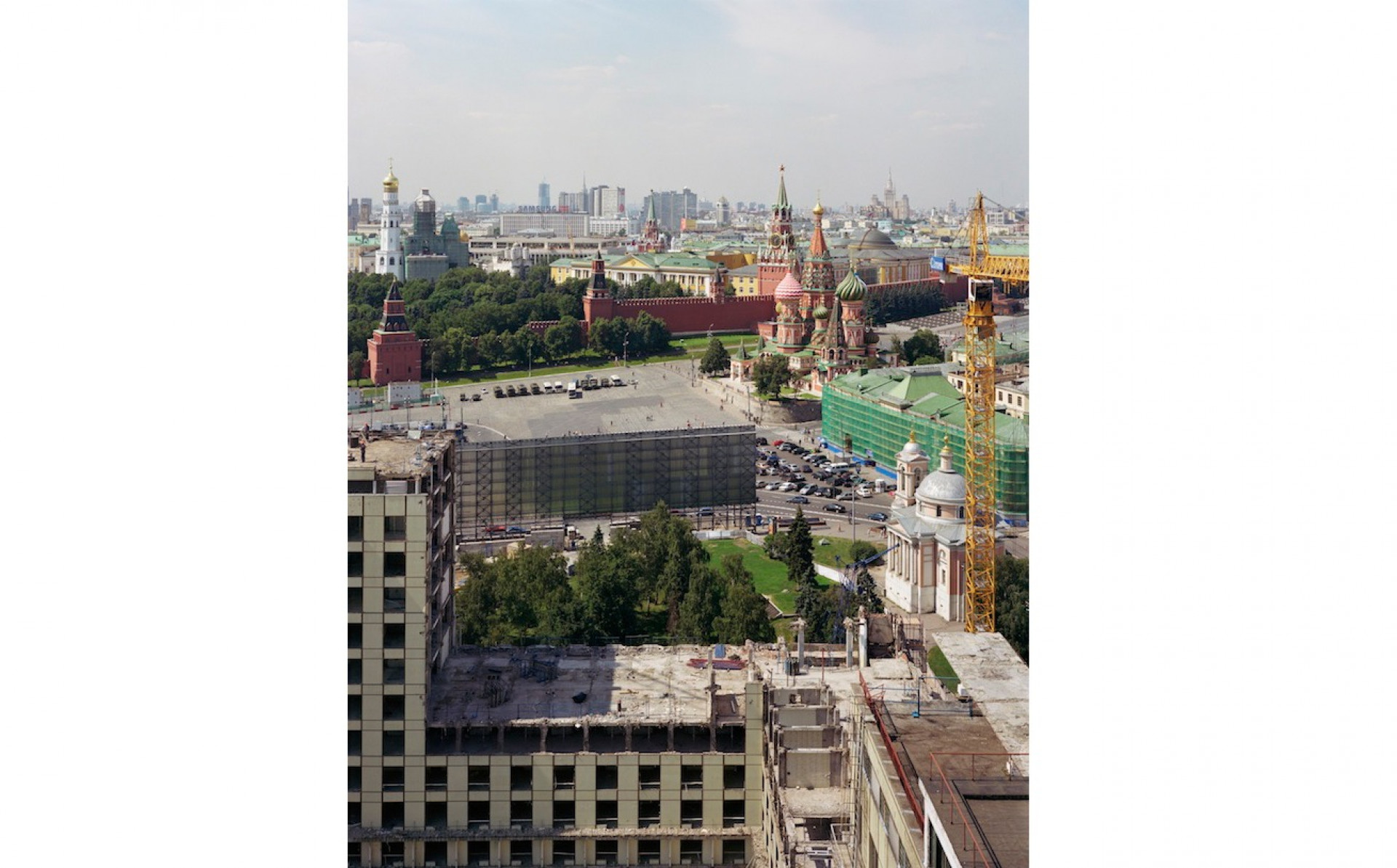 With 4,000 rooms, the Rossiya was the largest hotel in Europe before falling victim to Moscow developers. Hall arrived just as they started tearing it down to make room for a new business district. The “concept has changed” since then, however, and the giant post-industrial wasteland currently bordering the Kremlin is supposed to become a futuristic park designed by the U.S. architectural firm Diller Scofidio + Renfro. Doug Hall 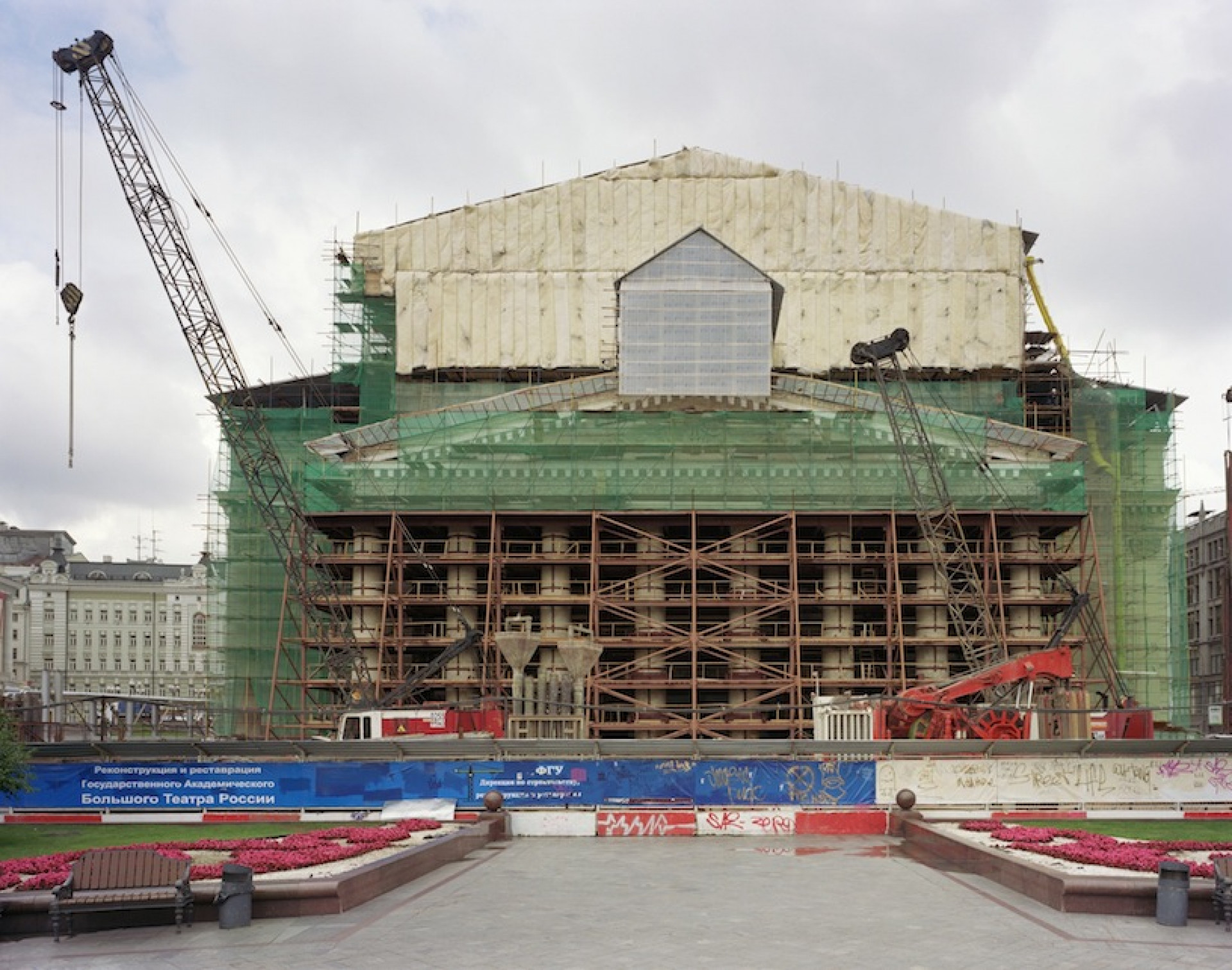 The many years the Bolshoi Theater was under reconstruction are now forgotten like a bad dream, but terrible rumors circulated throughout Moscow in 2006. It was said that construction on the theater’s basement hit karst (a type of rock that is full of holes), that financing had dried up, and that the Bolshoi’s foundation could give way at any moment. (Today, the theater has lost the scaffolding and returned to its former glory.) Doug Hall 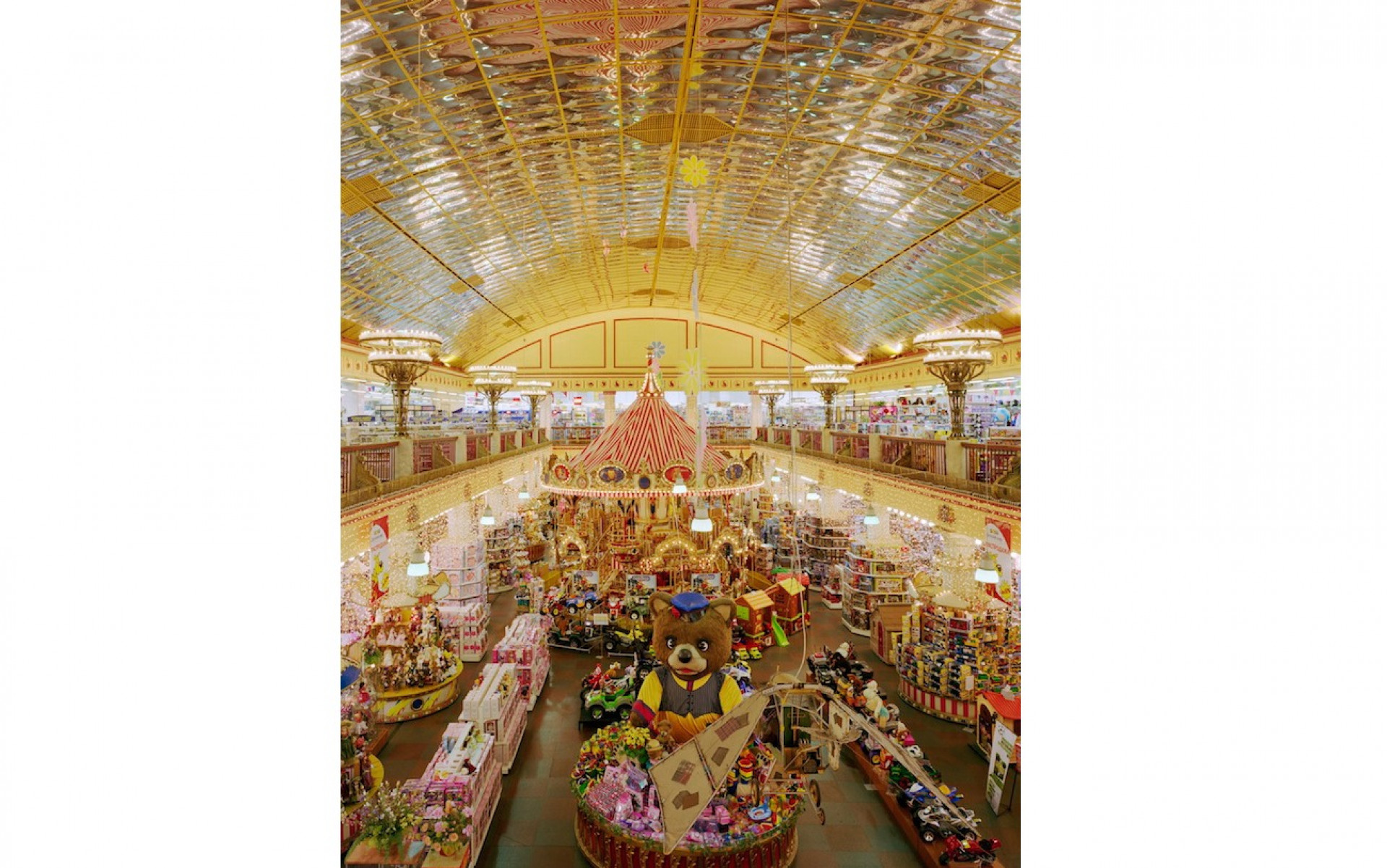 The original Detsky Mir (Children's World) near Lubyanka Square was still open for business when Hall visited Moscow in 2006. Two years later, the building closed for reconstruction, and all the design elements that gave its atrium such novelty and charm were removed: the towering floor lamps, ornate balustrades, and central frieze with larger-than-life rabbits and ducks designed (specifically for the store) by the Soviet-era architect Alexei Dushkin. Doug Hall 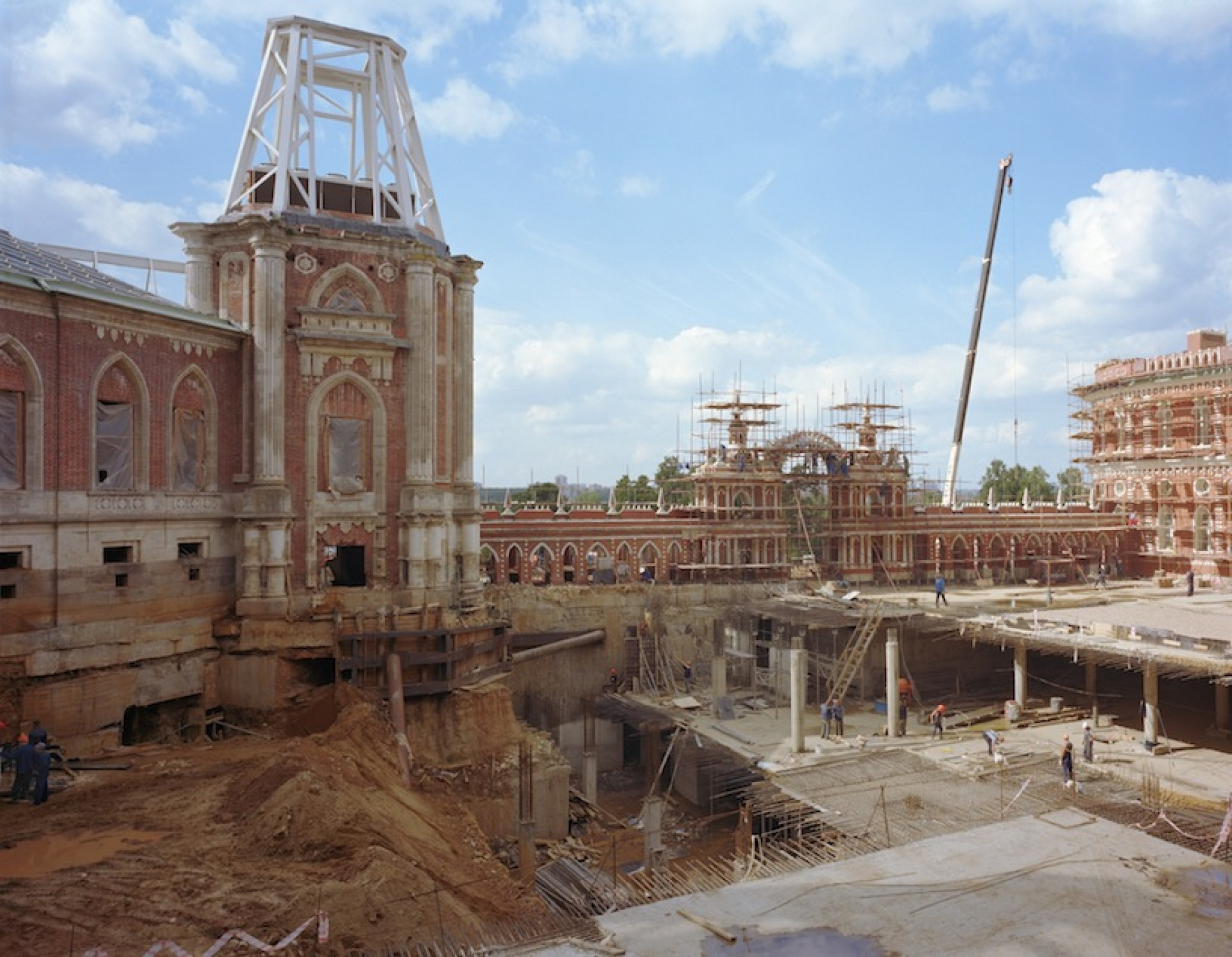 Hall arrived when the reconstruction of Tsaritsyno Palace was at its peak. In the late 18th century, Catherine the Great originally ordered the neo-Gothic mansion to be built, but she later changed her mind, and builders abandoned the project. The romantic ruin — one of Moscow’s most mysterious legends — sat there for more than two centuries, until an energetic mayor named Yuri Luzhkov decided to turn the place back into a construction site. Doug Hall 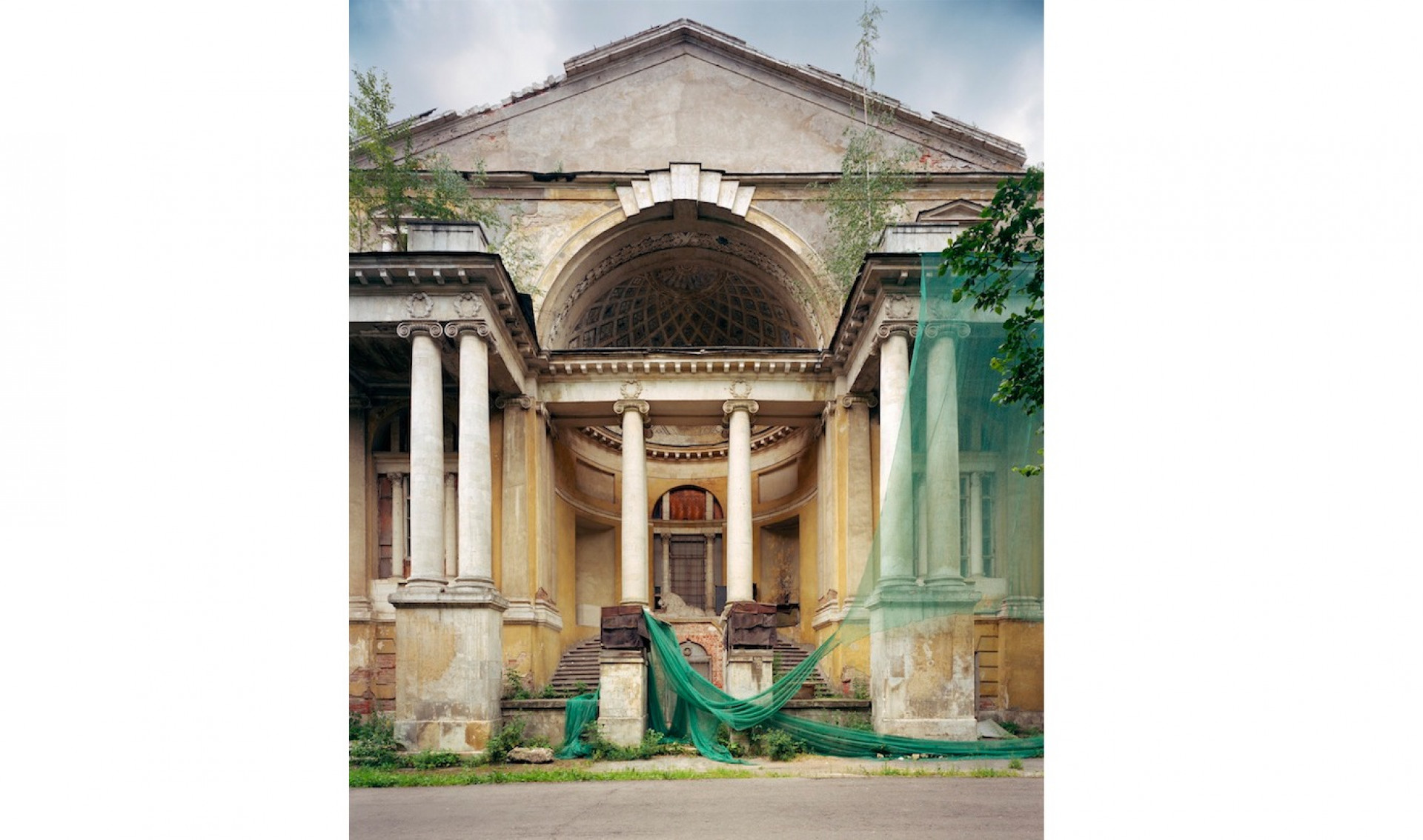 The classic wooden Razumovsky Palace near the Kurskaya Railway Station was, we believed, one of Moscow’s most vulnerable architectural landmarks. A succession of fires had left it in poor condition, but Hall’s romantic photo glamorizes the building. Fortunately, the palace’s long-awaited restoration was completed a year ago. Doug Hall 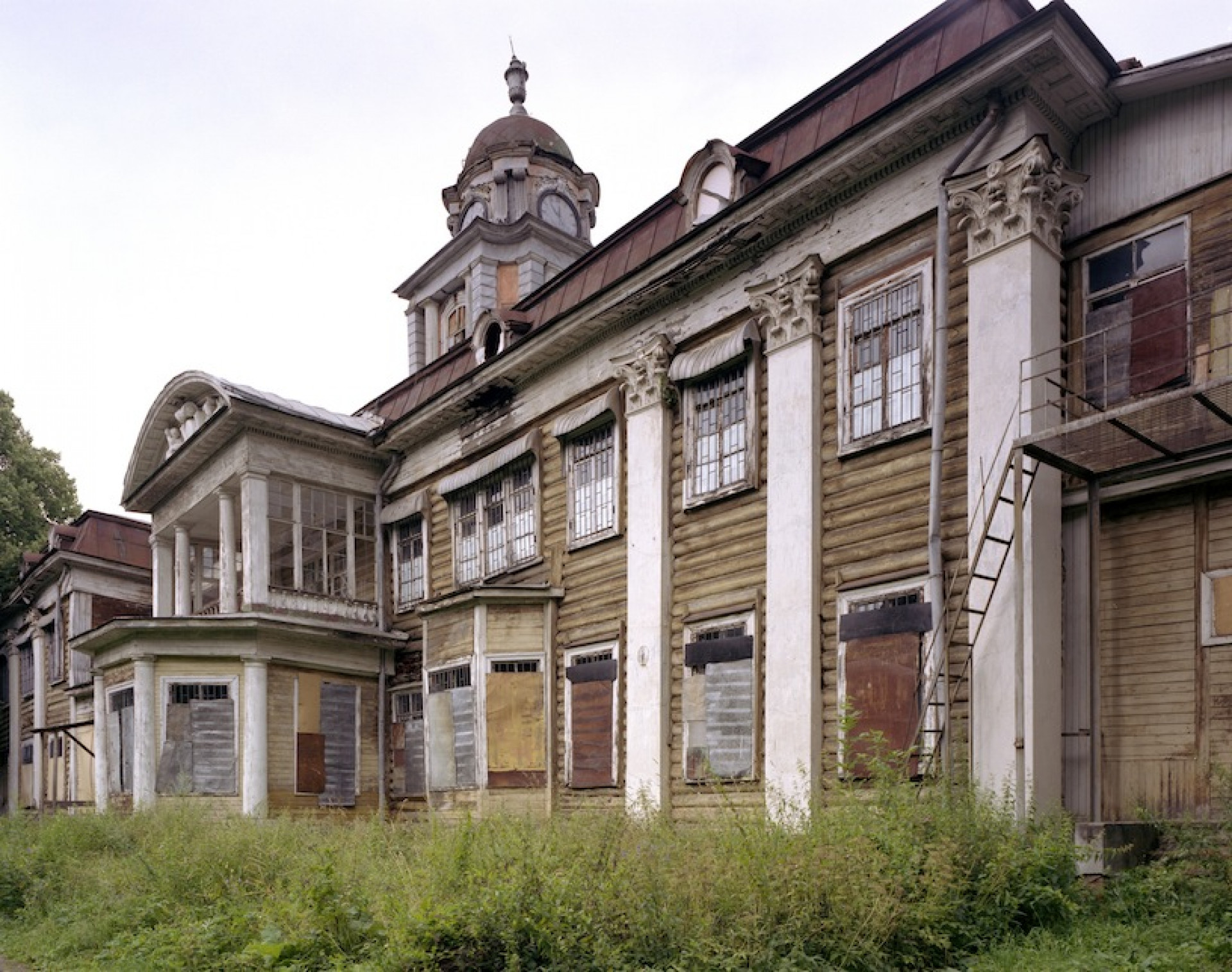 Less fortunately, the Hermann House at the Vinogradovo estate in northern Moscow — the largest wooden estate building in Russia — did not fare as well. A children’s cardiology sanatorium was housed in the building as recently as the early 2000s, and the abandoned manor house looks much worse now than it does in Hall’s photos. The government has not allocated any funding for its restoration. Doug Hall 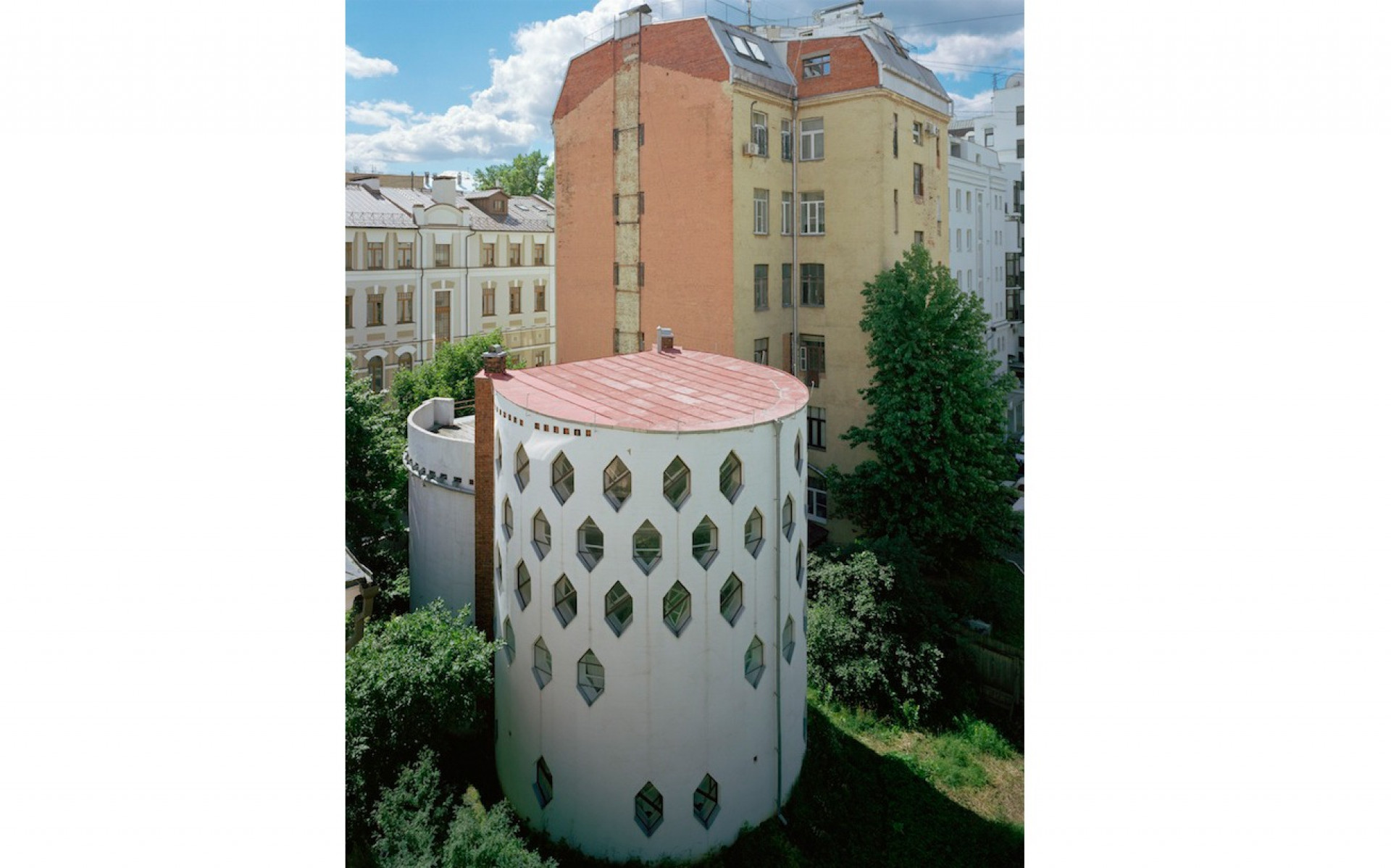 The home and workshop of the avant-garde genius Konstantin Melnikov is a “must see” for any connoisseur of modernist 20th-century architecture. When Melnikov’s son died in 2006, the public was surprised to learn that the young millionaire Sergei Gordeyev had acquired half of the building, leaving its fate in question. A thorny conflict continued for years and only ended when ownership finally passed to the government, albeit on the condition (which many thought to be cruel) that Viktor Melnikov’s daughter, Ekaterina, vacate the premises. Doug Hall 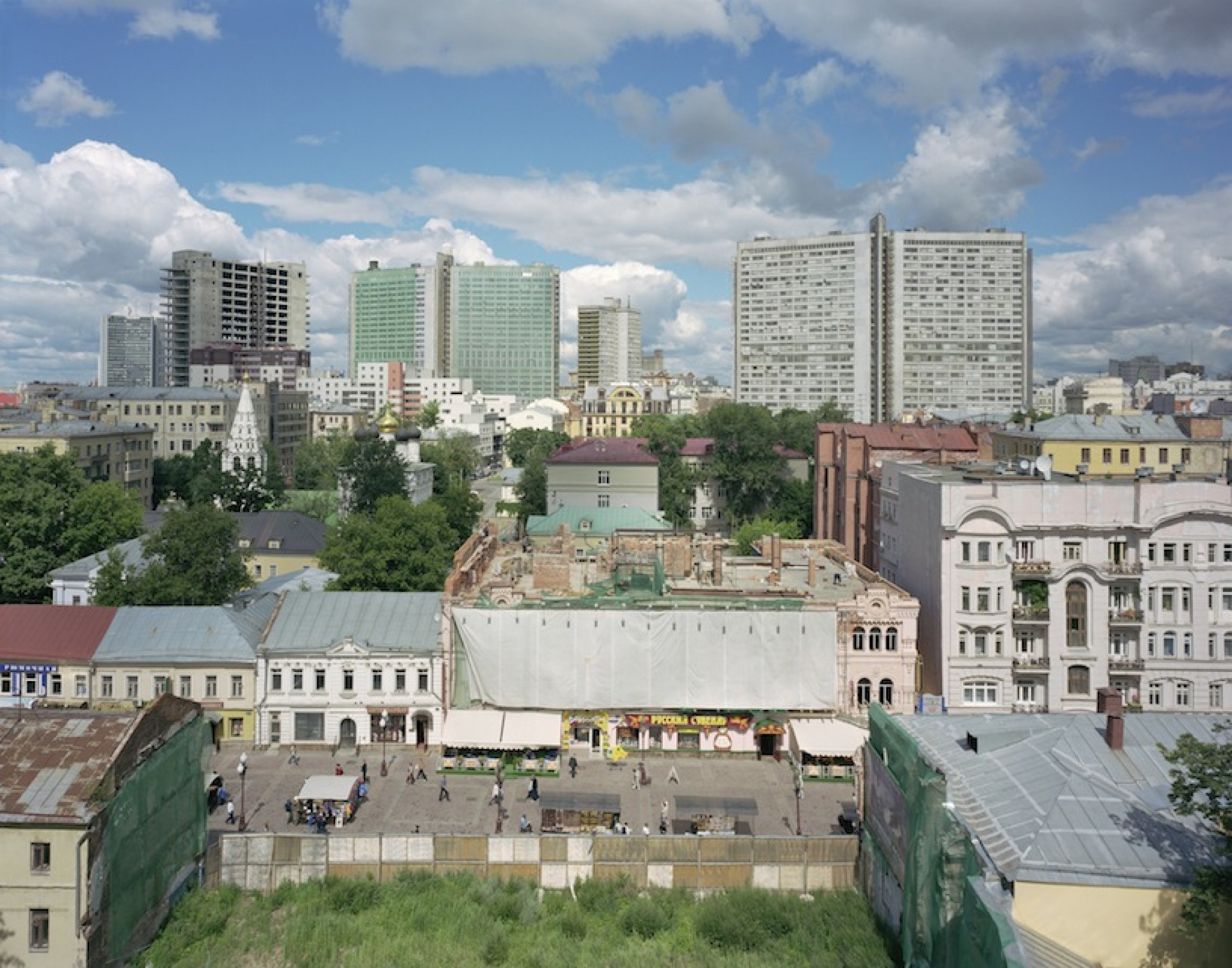 Hall photographed the Old Arbat before the introduction of new retail and office buildings, the construction of which altered underground water flows and flooded the foundation of the nearby Melnikov House. Doug Hall 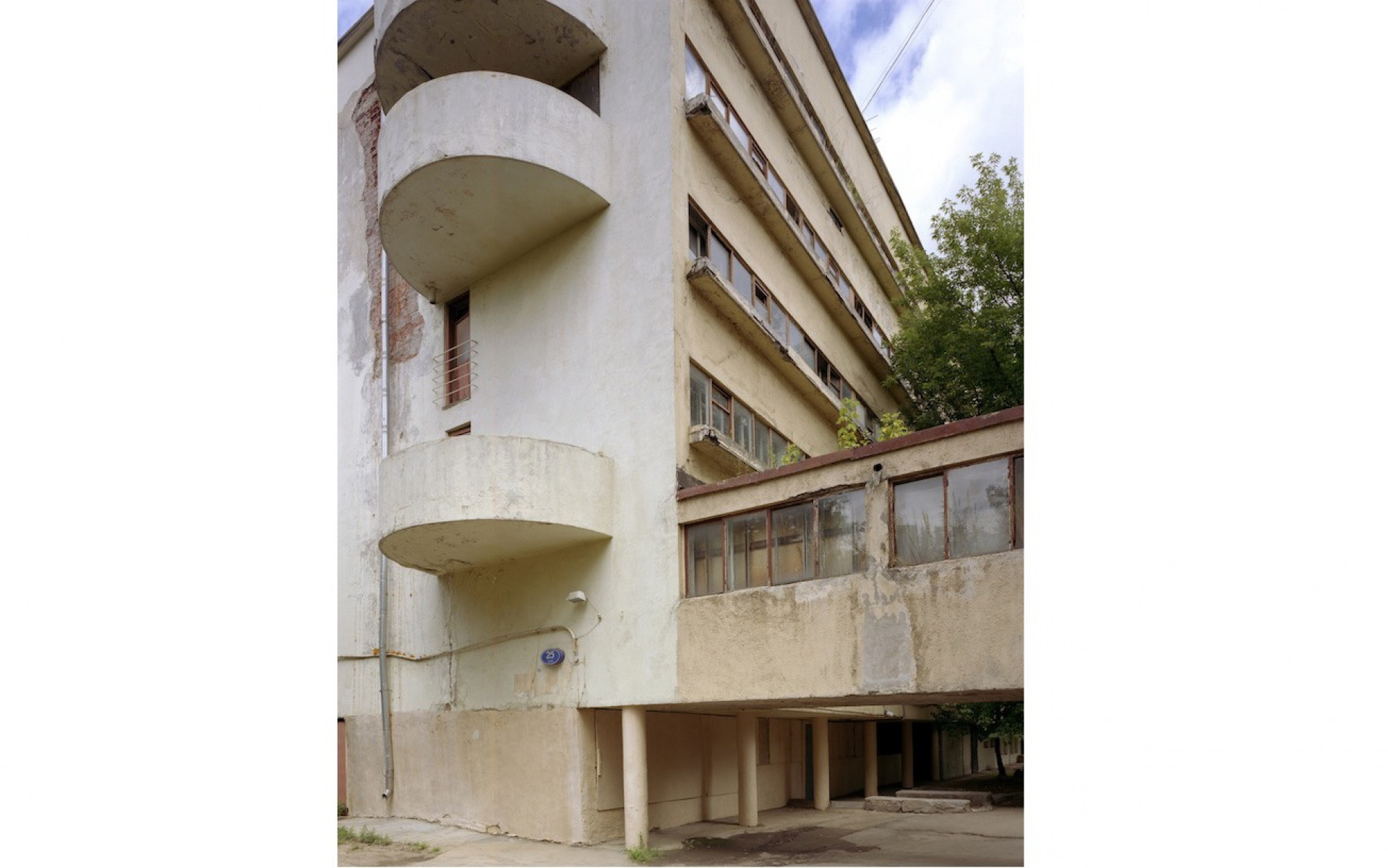 Another dilapidated architectural masterpiece of the Moscow avant-garde, the Narkomfin House, near the U.S. Embassy, has also experienced its own ups and down over the past decade. In 2007, businessman Alexander Senatorov bought the building and announced plans to turn it into a boutique hotel. After several financial crises, however, Senatorov sold the house to Garegin Barsumyan, who recently announced that a detailed, historically accurate restoration of the landmark will begin shortly. Doug Hall 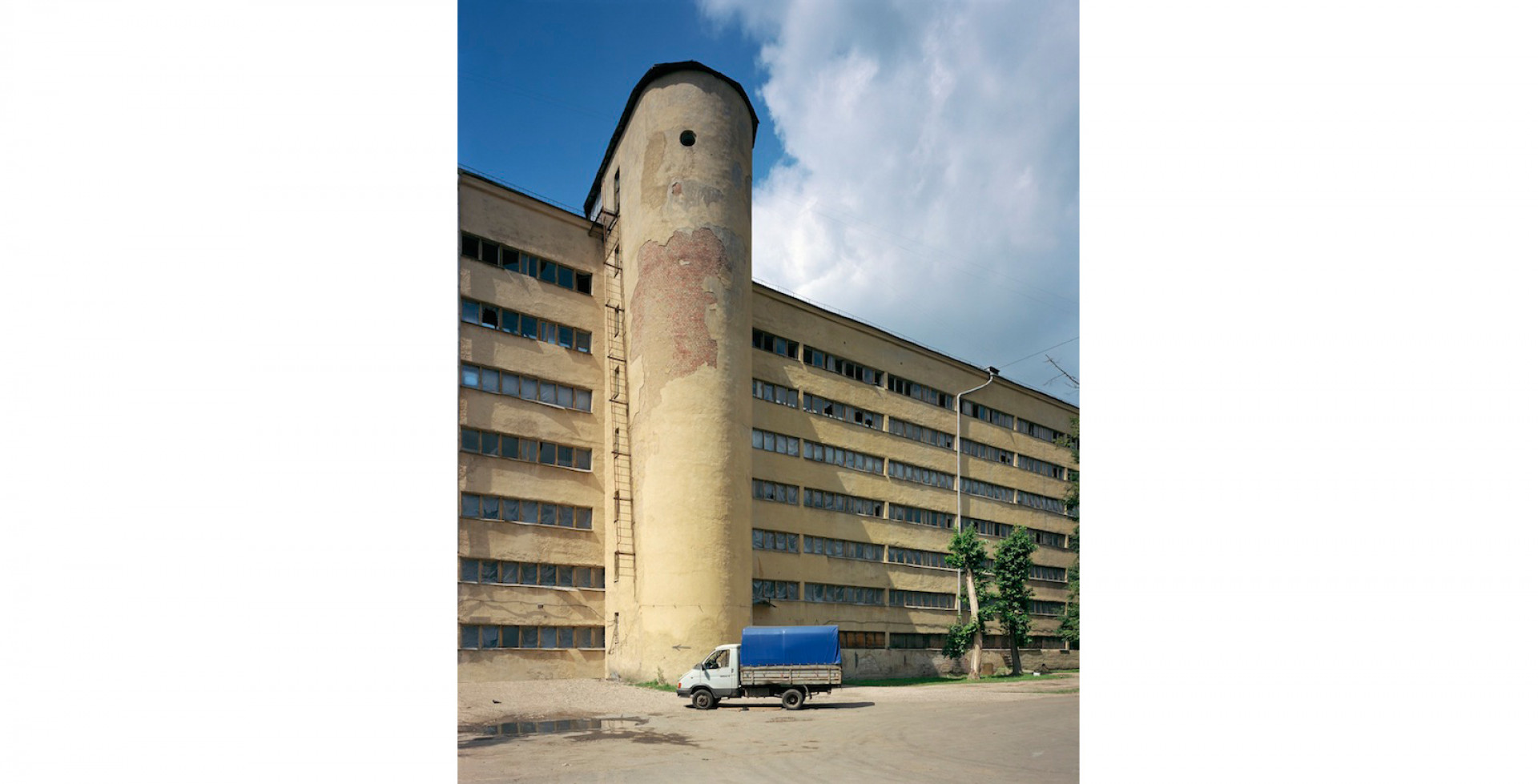 The Textile Institute dormitory, or communal house building on Ordzhonikidze Street, is one of the largest incarnations of the socialist experiment in Moscow. The three-building complex had fallen into a state of extreme disrepair by the mid-1990s. Reconstruction began in the late 2000s and ended this year. The original materials were replaced, but the look of the remarkable monument was restored. Doug Hall 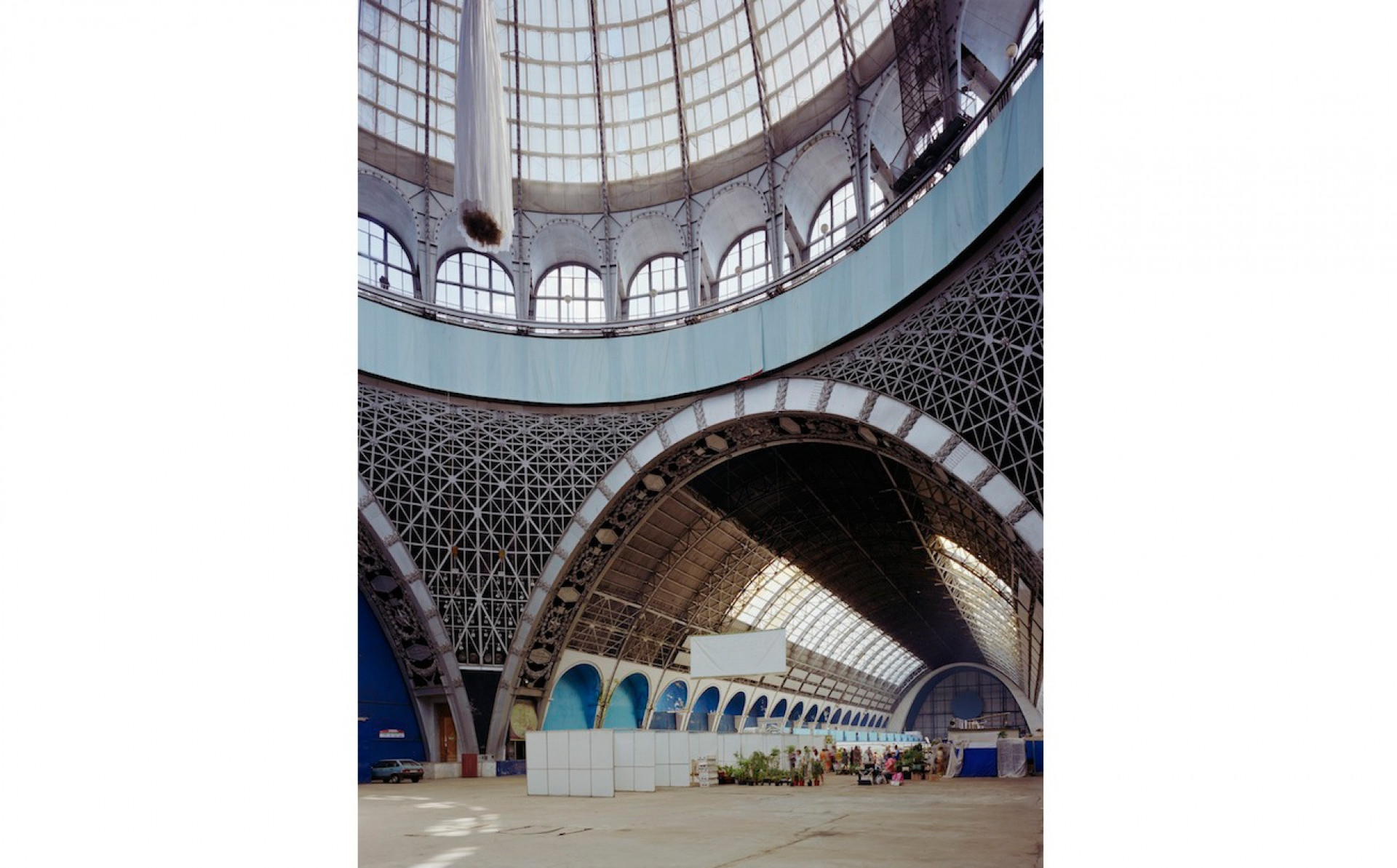 The flowerbeds adorning the VDNKh grounds for Victory Day (when Russia celebrates the USSR’s defeat of Nazi Germany) were still there in August (three months after the holiday) — a testament to both the herculean efforts and overactive imagination of the park’s designers. VDNKh’s pavilions, however, were in a less impressive state. The Kosmos, or “Space pavilion” (once the pride of the Soviet Union), was now home to a gardeners’ market, and only the flattened parachute hanging beneath the canopied ceiling conveyed any indication of its glorious past. Doug Hall 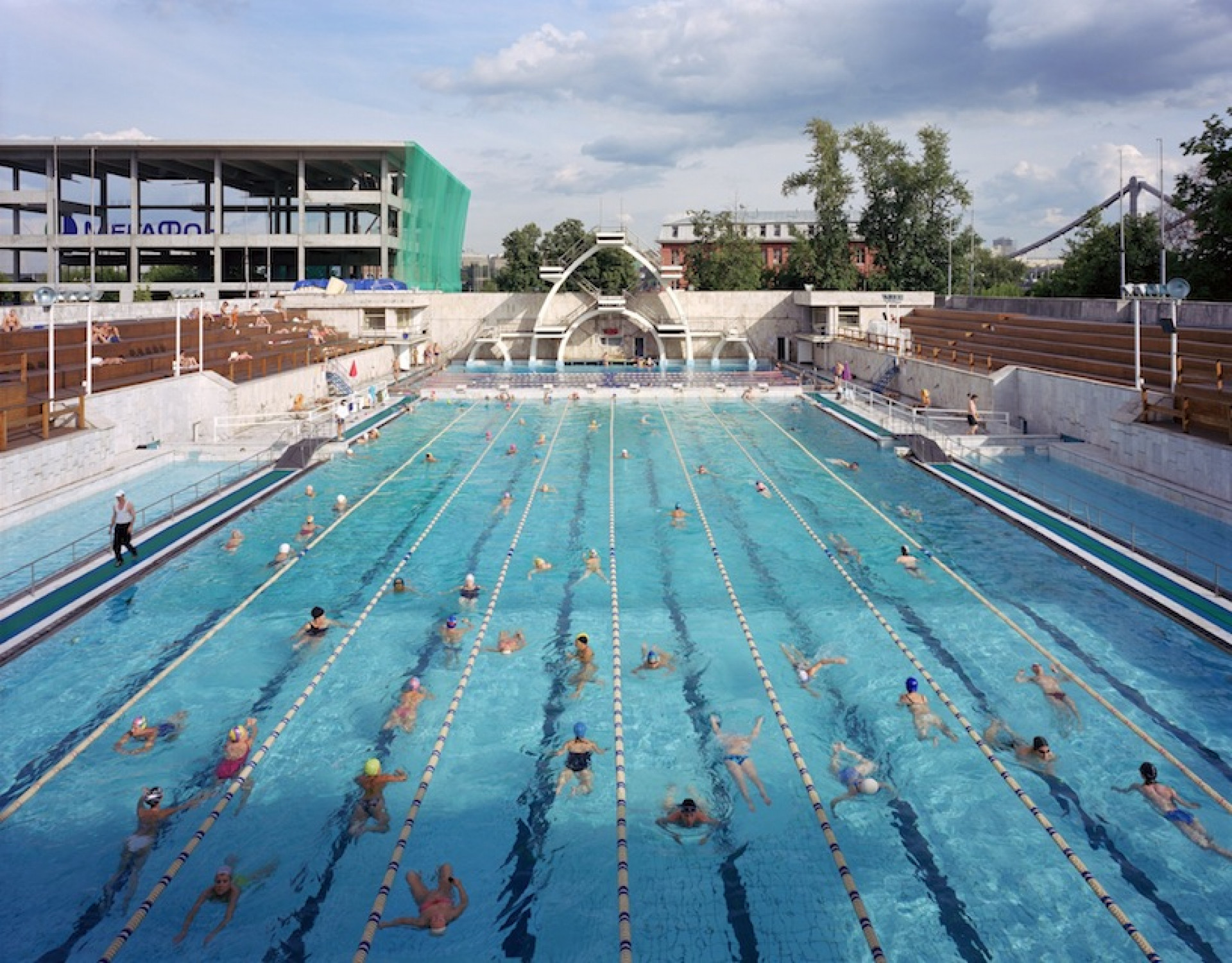 Doug Hall was drawn to people in water. He recorded some of his most famous photographs on the beaches of New York and California, and at swimming pools in Las Vegas and Yokohama, Japan. What surrounds the Chaika swimming pool in Moscow has changed dramatically in the last 10 years: the old Ostozhenka mansion buildings have given way to the most expensive apartment complex in the country, earning it the nickname “The Golden Mile.” Doug Hall 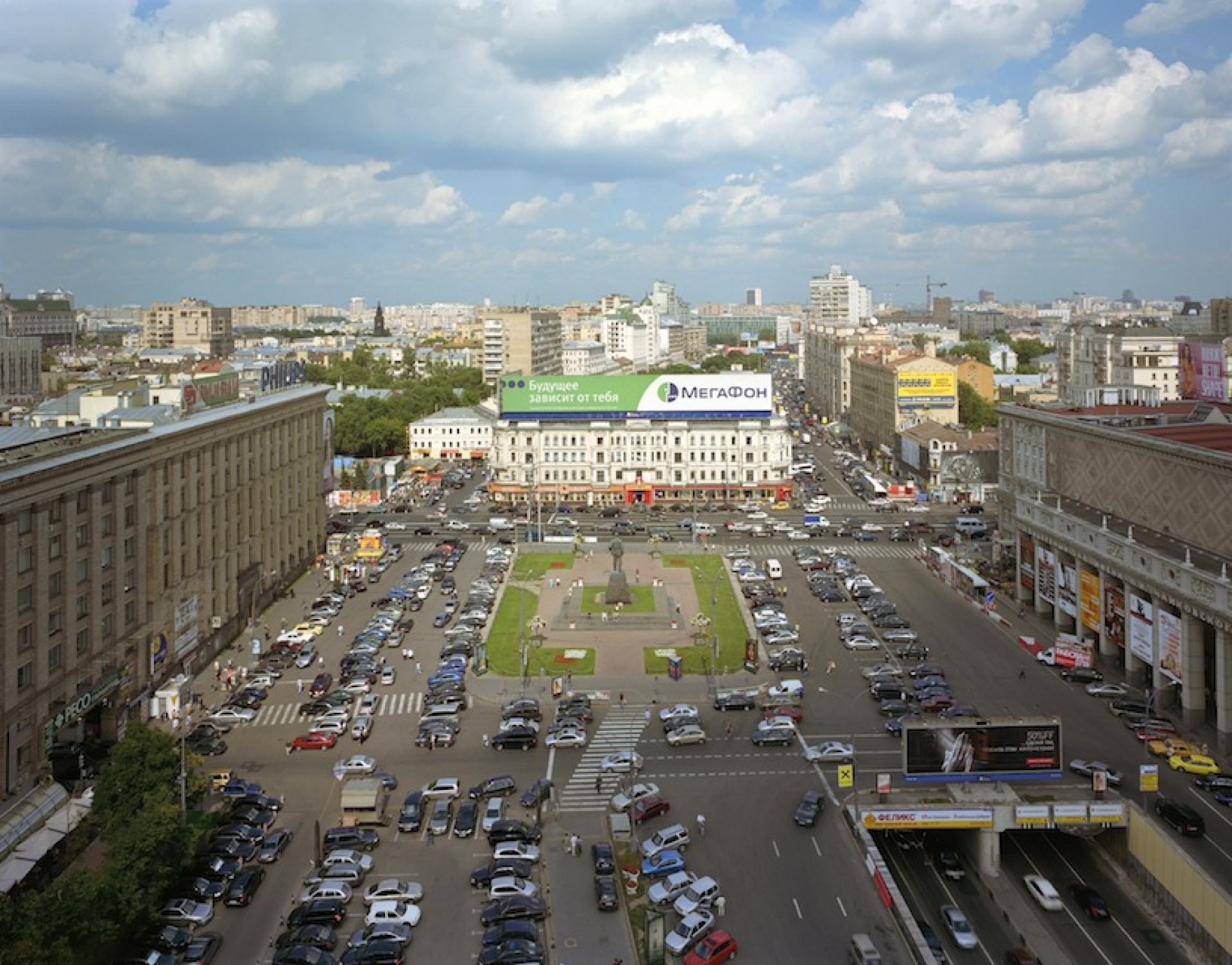 Moscow’s vast empty spaces fascinated Doug Hall. Triumphal Square, with its monument to Mayakovsky, seemed at the time like something eternal and immutable. Later, though, young architects from the company Buromoscow and the landscape designer Anna Andreyeva undertook a reconstruction of the space last summer that has changed the feel of the square beyond recognition. Doug Hall 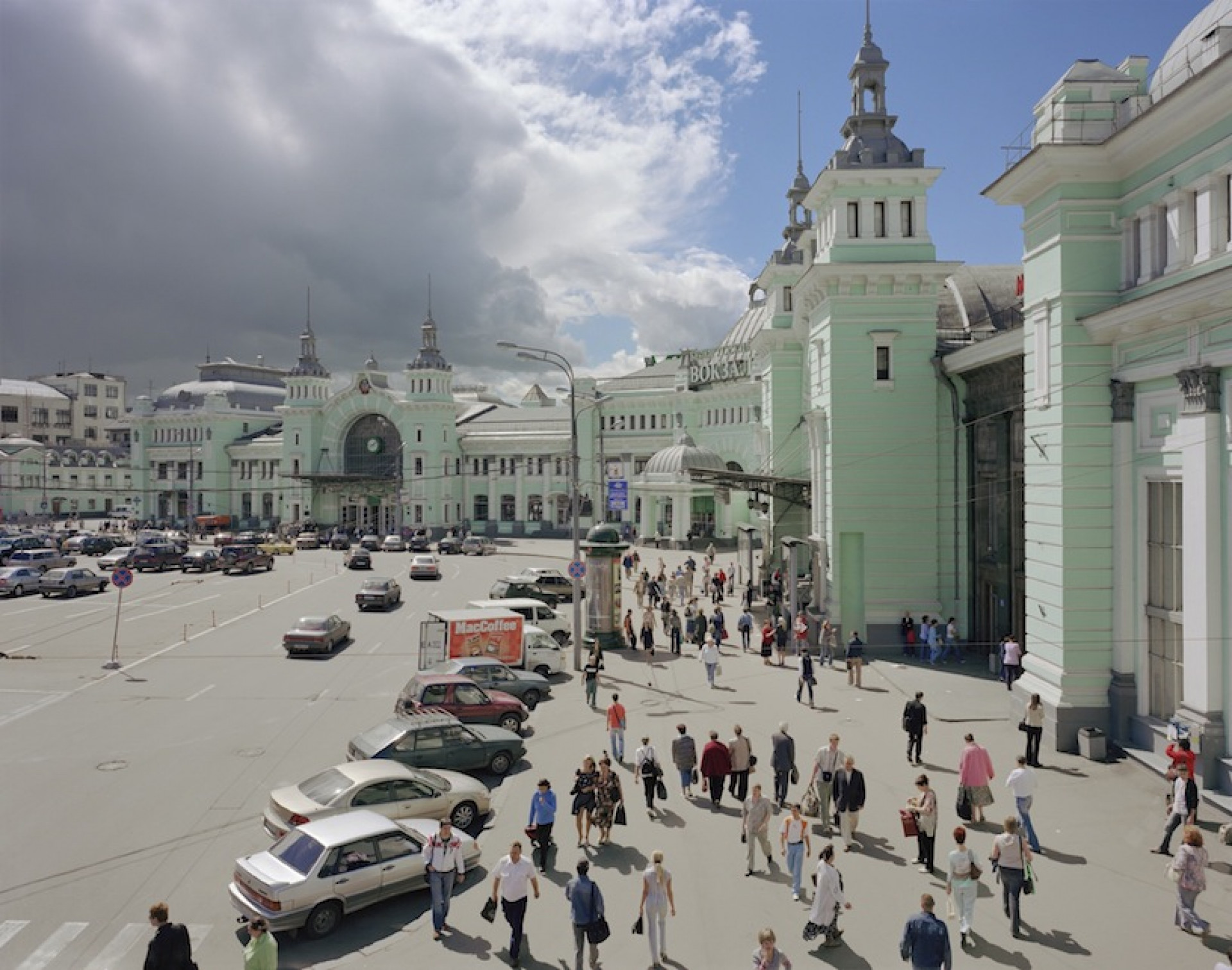 Outside the Belorussky Station, you’ll find another always bustling corner of Moscow. For years and years, the saga of the square’s reconstruction dragged on, infamous for the endless digging, traffic congestion, chaos, and grime it produced — all for the dubious aim of building an underground shopping mall. (The ambitious project was finally abandoned only recently.) Doug Hall 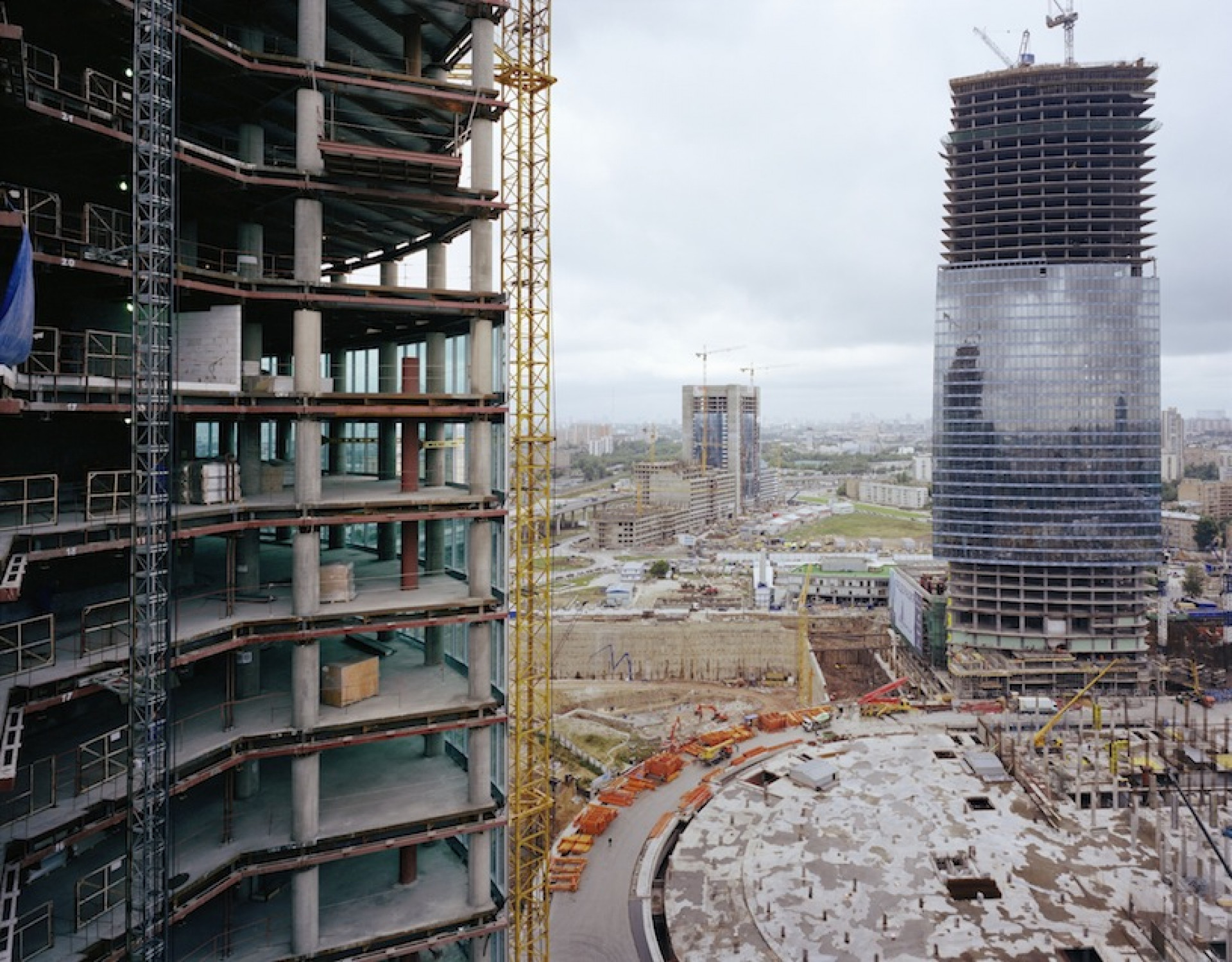 When Doug Hall photographed “Moscow City” during the early phase of construction, its tendril girders seemed brittle and insignificant against the blue expanse of sky. It’s hard to believe that — just ten years ago — Moscow City as such did not even exist, and after the 2008 financial crisis its fate was still in doubt. Today, construction on the high-rise business center is almost complete, although it remains a half-empty hull and an eyesore to many Muscovites. Doug Hall

A decade ago, many of the people who formed the Moscow Architecture Preservation Society (MAPS) weren’t even thirty. The group was created to stop a construction boom unleashed on the city by Yuri Luzhkov, Moscow’s former mayor. The founders thought they could halt the whole thing if only they shouted to the world loudly enough that it was wrong to destroy the city’s architectural heritage.

The idea to found MAPS belongs to three people: Clementine Cecil, who worked in the Moscow office of The Times, Kevin O’Flynn, a reporter for The Moscow Times, and Guy Archer, an American publisher. I later joined as chairperson. The group soon established ties to existing organizations, like SAVE Europe’s Heritage and the World Monuments Fund. The latter introduced us to Doug Hall, who had never even been to Moscow.

Hall had become famous decades earlier, for radical video art, installations, and performances in the 1970s, and shifted to photography in the 80s. By the time he connected with MAPS, Hall was a professor emeritus at the San Francisco Art Institute. He was known for his cityscapes: large-format panoramas of major cities, capturing all their contradictory commotion and rigidity.

We both had something to offer each other: Hall wanted to capture another city in transition — the changing face of Russia’s capital — and we needed someone to document the rapid disappearance of historic Moscow. When it comes to permits, you can only guess how many administrative fiefdoms, both large and small, make up Moscow. Somehow, though, we got permission to film almost every building on our list, and in August 2006 Doug Hall landed in Moscow to begin his work.

The project took our crew to some interesting places, to say the least. We went deep underground to film subway cars as they parked for the night. We climbed the Christ the Savior Cathedral and the towers of the Stalin skyscrapers, roamed the maze of Moscow’s courtyards, and wandered through vast residential areas, searching for the mood that would yield the perfect photograph.

Wherever we went, Doug and his large, old-fashioned camera and tripod drew looks from passersby. It was Doug’s point of view, though, that interested us: his perspective was unique and honed from studying dozens of world cities. What he chose to film was alternatingly unexpected and deliberately iconic.

The Yeltsin Fund made it possible for Doug Hall to work in Moscow for an entire month. When he was finished, Hall flew back to San Francisco with suitcases full of exposed plates and he spent the next few months sorting and retouching the slides. We hoped to stage exhibitions in Moscow, London, and New York, and had plans to publish a photo album with captions in Russian, English, and German. The book would have included a foreward by philosopher and Moscow aficionado Karl Schlögel.

In the end, however, we could only afford the album’s layout. We had no luck finding more sponsors, and the entire project was shelved in 2008, when the financial crisis hit. The project was only ever displayed once in public, over a single holiday weekend in 2009, on Pokrovsky Bulvar in Moscow.

It’s been ten years since Hall’s visit, and not everyone in the original crew still lives in Moscow. Even Luzhkov has gone, making way for Mayor Sergei Sobyanin, who continues the destruction of Moscow’s architectural treasures. Almost every building that Doug Hall photographed has changed since 2006: some were carefully restored, others were radically reconstructed, and several were smashed to the ground.

Ten years ago, we wanted to call the book “Moscow: Metamorphosis,” and the city has indeed changed vastly since then.

An exhibition of Doug Hall’s work will open this month at the Benrubi Gallery in New York. That project, “Letters in the Dark,” is based on correspondence between Franz Kafka and his translator, Milena Jesenská. The exhibition includes two videos depicting fragments of their letters, along with photos of buildings, doors, gardens, and rooms — including places where Kafka actually lived, as well as random places added to create a surrealistic impression of pre-war Prague. Hall recorded some of those images in Moscow.

Marina Khrustaleva is the former chairperson of the Moscow Architecture Preservation Society and the coordinator of the Arkhnadzor advocacy group.